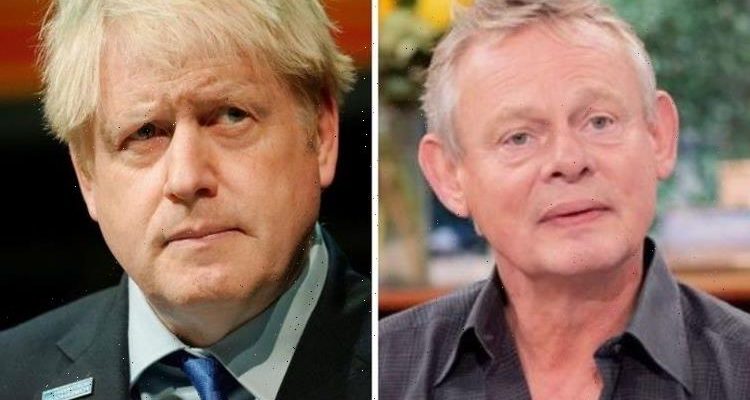 Mr Clunes returns to screens tonight in ITV drama Manhunt: The Night Stalker at 9pm. The show tells the true story of Operation Mistead, when the police searched for a man who was robbing and raping eldelry women across London between 1992 and 2009. Mr Clunes plays DCI Colin Sutton, whose CV included apprehending Milly Dowler’s killer Levi Bellfield, as was dramatised in Manhunt’s critically acclaimed first season.

DCI Sutton was asked to review Operation Mistead 11 years after the case was first opened.

In 2009 Delroy Grant was charged of rape, indecent assault and burglary and was sentenced to life in prison two years later after being found guilty on all charges.

The show’s executive producer Philippa Braithwaite said: “This inquiry has a very different emphasis to the Bellfield case; the victims were elderly and the crimes were unsolved for many years.

“The drama explores how Colin came late to the inquiry and helped solve it in a matter of weeks, taking an incredibly dangerous serial rapist off the streets.”

In 2019, while doing press for Manhunt’s first season, Mr Clunes slammed the “s***storm Government” while also praising the police force on This Morning.

He said his role as DCI Sutton had “opened his eyes” to the police work and “how many people and how much energy there is on [the force]”.

He added: “I thought it was a good time to maybe tell that story.

“I was playing the SIO [senior investigating officer] and I didn’t know what that was so I wanted to see how the rest of the team were towards him and he was towards them.

“We filled our boots and you just come away thinking ‘Thank God we’ve got a police force’.

“But we won’t have if this current s***storm governments have their way’”.

In 2019, UNISON, a police staff union, announced that Conservative governments since 2010 had cut 23,500 police staff jobs in England and Wales.

Mr Schofield quickly apologised to viewers while the clip of Mr Clunes foul language was cut out from ITV’s catch up service.

Don’t Miss:
William and Kate given ‘higher role’ than Charles and Camilla had[INSIGHT]
Princess Beatrice and Eugenie’s touching ‘keepsake note’ to Fergie[ANALYSIS]
Alan Shearer feared he ‘would get done for manslaughter’ after scrap[OPINION]

However when Mr Clunes returned to the This Morning studio to promote the show’s second season last Thursday, Mr Schofield was forced to apologise again after the actor swore three times in ten minutes.

While describing the brutal crimes central to the The Night Stalker Mr Clunes noted that in the show we “just see them stop the b*****d.”

He then added that someone had commented on his character’s “b****y cardigan”.

Holly Willoughby then asked why Mr Clunes had chosen to play the detective over other characters he had been offered.

The actor answered: “I don’t really enjoy those t****r of the yard, I call them.”

Once Mr Clunes had finished speaking Mr Schofield politely said: “I haven’t apologised for each of the bits of bad language, because obviously it would take up far too much time.

“So what I’m going to do is apologise for all three of them in one sort of apology.”

Watch the Manhunt: The Night Stalker on ITV at 9pm tonight.