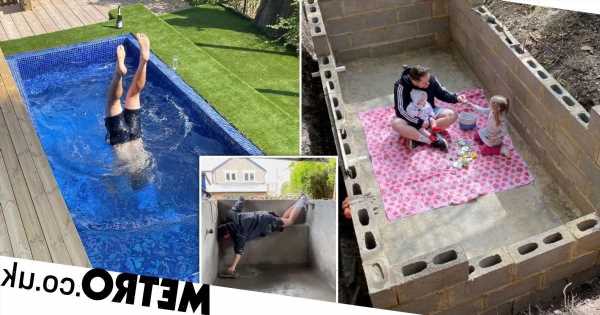 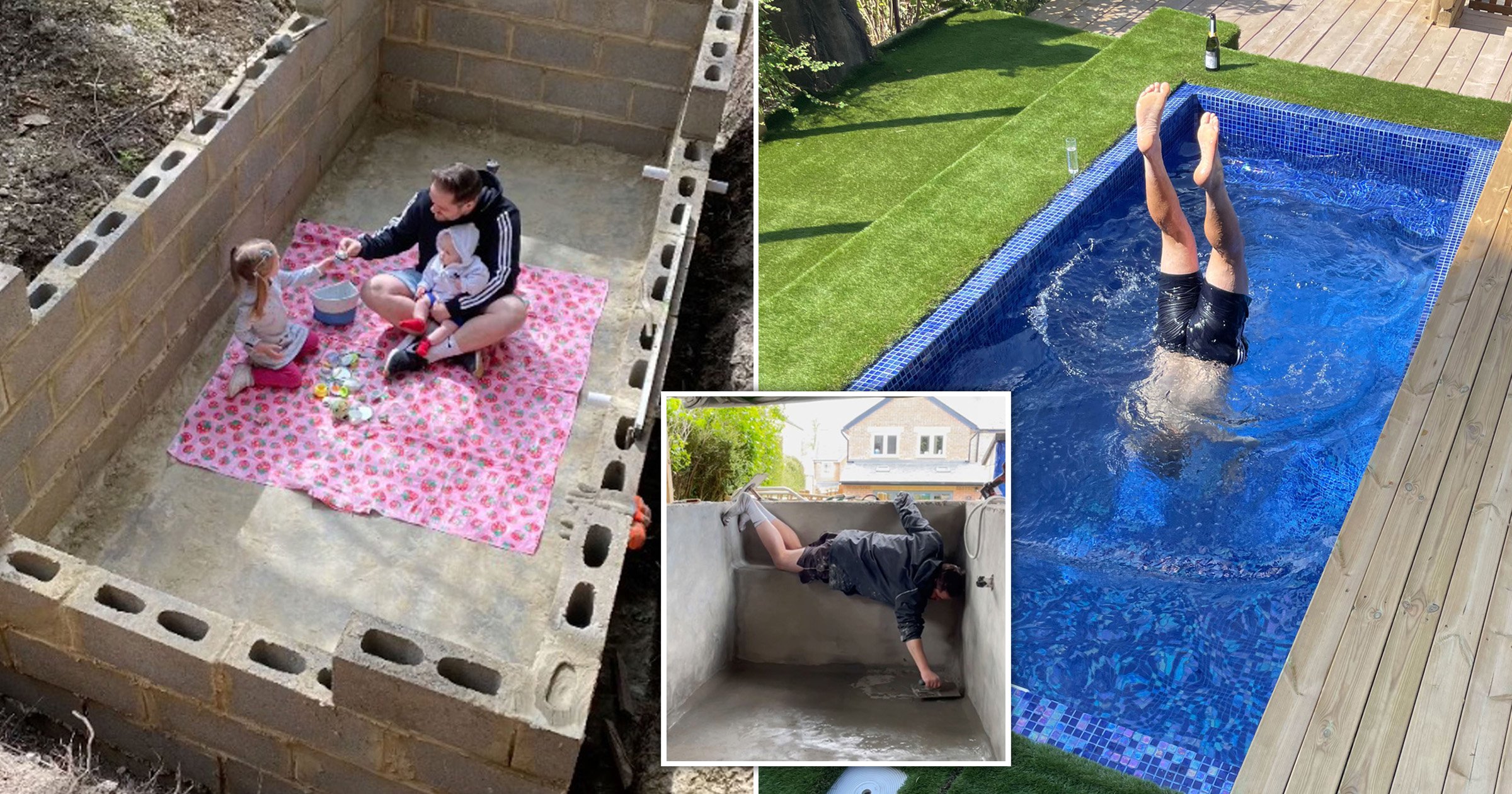 A dad has found a unique way to beat the heatwave by building a swimming pool in his back garden.

And he used YouTube tutorials to teach him how to do it.

Alex Dodman, 36, from Saffron Walden, Essex, always had a dream of building a swimming pool in his back garden and thankfully, the heatwave has pushed him to do it.

The ambulance worker is well used to building incredible DIY projects. Alex previously built a home cinema and gym saving £75,000 in the process but his latest project is his pride and joy.

He and his partner Sarah, 36, moved into their home in 2017 with their two young children Allie, five, and Eddie, two.

Claiming that his friends and family are used to his wild ideas, Alex underestimated how tough this one would really be, building the pool entirely by himself.

‘I did everything myself, from picking up the materials and carrying them into my garden, to hiring a digger and digging the hole as well as the tiling and all of the plumbing,’ he explained.

‘I watched a video on YouTube on my lunch break of someone building a pool and that same day I was on the phone hiring a mini digger.

‘I had dreamt of having pool once the house was renovated, and I’d even earmarked a little patch to hopefully build it on one day.

‘When I watched a YouTube video of a woman in Holland building pool, I knew I wanted to do it.

‘I ordered the supplies I needed from local builders merchants, and had hired a mini digger.

‘I started building it in January 2020 and had dug the hole but then Covid hit and I couldn’t get anything materials for ages.

‘In retrospect, it was a bit of a blessing that I had to stop. It slowed it down which meant I was able to take my time with what I was buying and ordering and knowing what I needed.’

He continued: ‘Because most places were closed, I started buying the things I needed from Facebook Marketplace, which was a lot cheaper.

‘I also got plumbing pipes, the tools to drill the holes and swimming pool equipment from Facebook too, it was great.

‘It even has it’s own heater so it won’t be freezing cold.’

Since becoming quite the hand at DIY, Alex’s main aim was to build a swimming pool. He managed to find a corner of his garden that looked like it needed some TLC and decided that would be the chosen area.

Buying most of the materials from Facebook, Alex’s pool has saved him thousands. It cost only £10K to build, comparing to over £12K for a professional, in-built swimming pool.

‘I did the whole thing by myself, from putting all the materials in my car and bringing them home to resurfacing the ground to make it flat,’ he said.

‘It was a very stop start project as I started it in 2020. Covid made it stop for months, and the area of the garden that it was in meant I had to do a lot of work with the earth, and by the time I could get round to getting back into doing it again, mini digger had gone which meant I had to hand dig and rip out bushes myself, it took months to get the earth underneath flat as the garden was on a slope.

‘I then did some work over winter of 2020, and then the autumn of 2021 I got going again, I had to move six tonnes of sub-base and add Astro turf around the pool which I was doing over the winter.

‘It has definitely been a challenge.’

Alex shared his work on TikTok and regularly updated his followers with the progress of the pool. It now has 36 parts.

‘I started making TikTok videos of pool in January 2020, so I had backlog of videos I had take so I broke it up and posted it in parts,’ he adds.

‘I document a lot of my DIY around house, from the kitchen, to the home office, outdoor gym, pizza oven and the building of the pergola.’