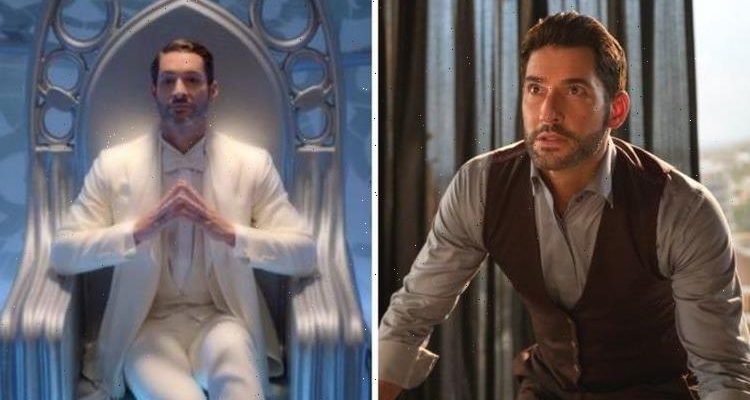 Lucifer: A look at behind the scenes of series six

Netflix’s biblical adventures series came to end in September with an explosive finale which saw Lucifer Morningstar (played by Tom Ellis) take his throne as God. Despite this, Lucifer fans seemed to notice the absence of a fan-favourite Eve (Inbar Lavi) which didn’t quite add up.

Taking to Reddit to share their theory, tlaw23 asked other fans if they knew why Eve had been absent in the last few episodes.

SlayerNina responded: “Yes, it p***ed me off. Eve wasn’t there to help reading Linda’s book or Lucifer didn’t say goodbye to the mother of humanity.”

However, another viewer, overcode2001, seemed to disagree and commented: “The whole point of Linda’s book reading was to bring the core characters together for the last time.”

In response, another fan explained Eve was never considered a “core character” and was instead Mazikeen’s (Lesley-Ann Brandt) happy ending.

Although some fans may believe she wasn’t a “core character,” Eve was introduced to viewers in season four in a pretty major way.

Initially, she was created by God (Dennis Haysbert) to be Adam’s (Scott McArthur) new mate after his separation with Lilith (Lesley-Ann Brandt).

However, things took a turn when she became Lucifer’s romantic interest and after being sexually tempted by him, God sent her down to Earth to live the rest of her days as a human.

She had followed Lucifer, who was bored of living in Hell so he abdicated his throne and relocated to Los Angeles.

Unfortunately, this didn’t work out for the two as she brought out his darker side, which he was trying to keep hidden while on Earth.

Elsewhere, Lucifer had begun falling for homicide detective Chloe Decker (Lauren German) after she investigated a death at his club Lux.

Lucifer and Chloe got together which made Eve jealous, so she schemed a plan to have Mazikeen break William Kinley (Graham McTavish) out of jail as he prophesied Eve and Lucifer’s relationship would result in the world ending.

However, this plan to prove her love failed terribly and ended up with Eve killing William.

Eve eventually realised Lucifer and Chloe were serious, took a step back and noticed she was happiest with Mazikeen.

The two were engaged after a month of dating, but they continued to side with Lucifer when it came to his reign as God.

They stood with him during his battle with his evil twin Michael (Tom Ellis) to replace God as the Sovereign of Heaven and were proud to kneel for him when he won.

After Lucifer took his throne, the pair were prepared to live out their days in hell but realised they didn’t want to spend eternity condemning souls, so they remained on earth as a happily-married bounty-hunting couple.

Eve’s shift from being focused on Lucifer to Mazikeen moved her away from being associated with the newly titled God.

One fan disagreed with the writer’s decision to exclude her from the major season six ending and wrote: “I would have considered Eve as a core character, one full season was around her.

“She was the love interest of two main characters, not to mention that she could be useful too,” they continued.

“She has known Lucifer for a very long time and has experience with God/celestials stuff, surely she could have seen something the others don’t.”

While her wedding with Mazikeen was a huge moment for Lucifer streamers, the viewers remain convinced she should’ve been there for Lucifer in the last episodes.

Lucifer seasons 1-6 are available to stream on Netflix.