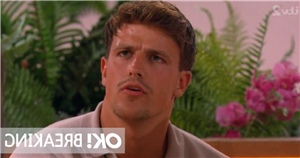 Tonight's episode of Love Island will see a fuming Luca Bish confronting Gemma Owen over her "flirty" behaviour with Billy Brown in the kitchen.

Friday 15 July evening's episode saw the Islanders gather around for Movie Night. After winning a round during a quiz, the boys chose a clip that was titled 'Good Bill Hunting".

The clip showed some flirtatious behaviour between Gemma and Billy that did not sit well with the 23 year old fishmonger.

Now, it's been revealed Luca is set to interrogate Gemma over her behaviour in upcoming scenes showing tonight on ITV2 at 9pm.

Pulling the 19 year old for a chat, Luca tells her: "You were entertaining it” to which Gemma replies: “No I wasn’t”.

Luca then calls Billy, 23, over to the fire pit to join them and asks: “Did you feel like she was flirting with you?” to which Billy answers: “Yeah, it was just flirty banter.”

Gemma immediately interrupts as she says: "Did we have a flirty chat? Yes.”

Luca then replies: “But just a minute ago you said you didn’t have a flirty chat, you literally said I wasn’t flirting.”

Later in the conversation, Gemma insists: "I don’t think any lines have been crossed.”

The first part of the clip shown on Friday night, showed a conversation where Dami Hope suggested Luca likes her more than she likes him.

"I don't think you're that far wrong with that you know!" Gemma had responded.

The second part of clip showed a conversation between herself and Billy in the kitchen, where she suggested they shouldn't chat for too long or they might raise suspicions. She then argued: "Friends can't hug!"

Check out all the latest hot topics on OK! magazine’s news section and discover exclusive celebrity news about your favourite soap actors and reality stars.

We're also on Facebook.com/okmagazineuk – for the latest online celebrity news, features, galleries and videos throughout the day from your favourite site.