Lorraine Kelly was joined by Ross King to talk about the latest celebrity news from Los Angeles. The broadcaster showed Lorraine a clip of Madonna throwing a pair of pink knickers into a bin but the ITV host admitted she was “cross” with the pop sensation for changing her appearance.

Ross explained that in the TikTok clip, Madonna claimed: “If I don’t get the panties in the bin, I’m gay.”

He said: “She doesn’t get them in the big, she shrugs at the camera and walks off.

Lorraine exclaimed: “Is that actually Madonna? I don’t recognise her! 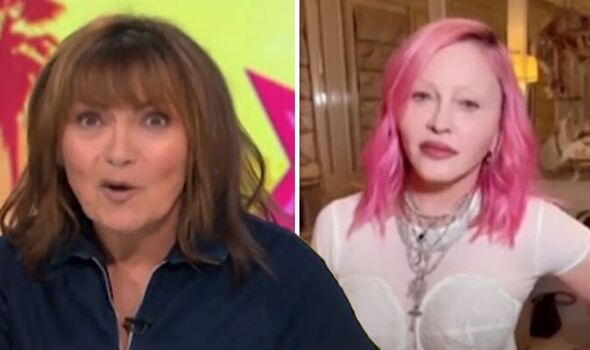 “Honestly, what’s she done? She was so beautiful – why, why, why do women do this to themselves?

“I’m cross because I really like her, I really do,” she added.

“I don’t understand what she’s doing there I’m not sure what that’s all about.

“As you say, we’re talking about it so that’s probably what it was.”

Later, the conversation turned to Annie Lennox getting her first tattoo at the age of 67.

Complimenting Annie’s appearance, Lorraine said: “We saw the picture of her there, phenomenal.

“And she looks a hell of a lot better than Madonna does because she hasn’t had any work done on her face and she looks incredible.”

Lorraine admitted plastic surgery was one of her “bugbears”.