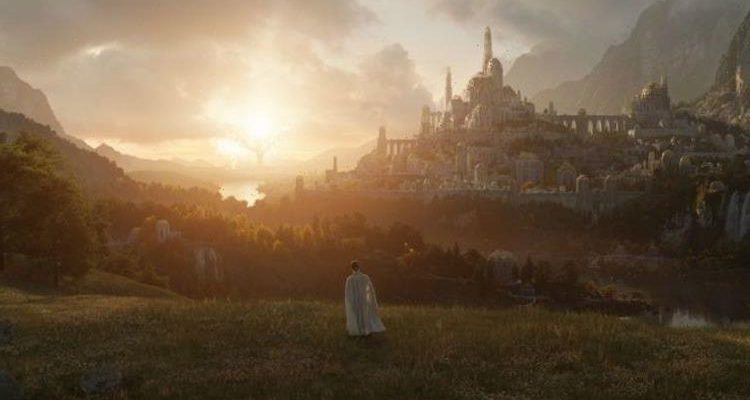 Lord of the Rings: Gollum trailer from Daedalic Entertainment

Lord of the Rings has just released its first image showcasing the Amazon Prime Video series. The image has left some fans confused over the exact time period of the show, with a certain location in the background throwing them off. But when is the LOTR adaptation set?

When is the Lord of the Rings series set?

Amazon Prime has just released the first image of the upcoming Lord of the Rings series and it has sent fans into a spiral.

The image shows what some fans believe to be a location far from Middle-earth, taking the show away from the location of the Peter Jackson trilogy.

In the image, a figure can be seen dressed in a white, flowing robe, overlooking a mystic landscape.

A grand white city can be seen in the background, but further in the distance is what has thrown fans.

Two enormous trees can be seen, both being no smaller than skyscrapers.

One fan zoomed in on the trees, simply asking: “What is this?”

Another replied: “The 2 trees of Valinor, Laurelin and Telperion. The Golden and The Silver.”

For those unfamiliar with the deep lore author JRR Tolkien’s world, Valinor, also known as the Blessed Realms are the home of the immortal Valar on the continent of Aman.

This is far to the west of Middle-earth, meaning fans should get to see the land beyond the original continent for the first time on screen.

The show itself will be set in the Second Age of Middle-earth, thousands of years before the events of the Lord of the Rings films.

The show will explore the history of Middle-earth and begin at a time of relative peace.

The exact story is still unknown, though it is believed to be taking elements from The Silmarillion, Tolkien’s collection of stories focusing on the history of Middle-earth.

Amazon Prime also confirmed the release date for the series, setting it for September 2, 2022.

Jennifer Salke, head of Amazon Studios said in a statement: “The journey begins September 2, 2022, with the premiere of our original ‘The Lord of the Rings’ series on Prime Video.”

“I can’t express enough just how excited we all are to take our global audience on a new and epic journey through Middle-earth!

“Our talented producers, cast, creative, and production teams have worked tirelessly in New Zealand to bring this untold and awe-inspiring vision to life.”

The official ensemble cast has also been confirmed, though the exact roles each actor will be playing are yet to be confirmed.

Fans have been sharing their excitement for the upcoming Amazon Prime series, with many of them replying to the post of the official image on Twitter.

One fan said: “The enduring final image of the LOTR was Frodo’s ship leaving the Grey Havens. Now the first image we see of the new series is the land that ship was travelling too.” (sic)

“Ready for BIPOC inclusion in the LotR universe. Also, LGBTQI+. This will be an improvement on Tolkien’s vision,” commented a third.

Lord of the Rings will be available to watch exclusively on Amazon Prime Video on September 2, 2022.