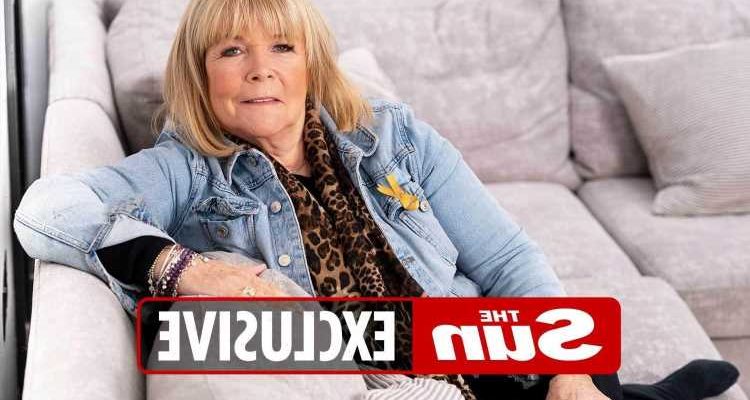 LINDA Robson has broken her silence on the reported feud with her Birds Of A Feather co-star Pauline Quirke – saying: “It’s a load of old codswallop.”

In her first interview since it was suggested Pauline had fallen out with the BBC1 show’s stars, Linda said they are still friends. 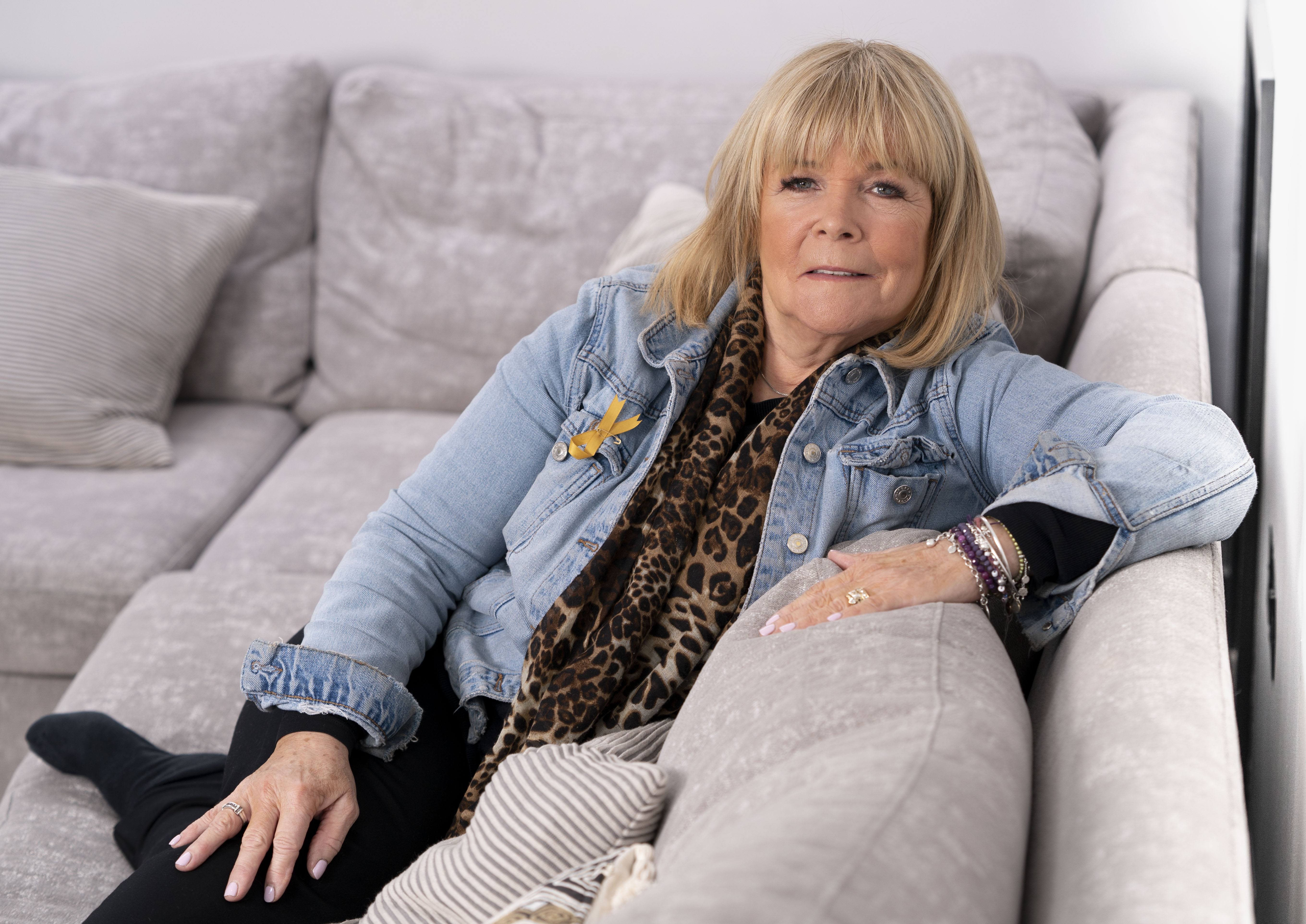 There had been an alleged face-off with Lesley Joseph outside TV studio toilets.

Linda, 63, who has played Tracey Stubbs since 1989, also insists the only reason Pauline, 61, missed last year’s Christmas special of the show was because she wanted to step away from the limelight.

Addressing the “irreconcilable feud”, she told The Sun on Sunday: “Take no notice of what you’ve heard about me and Pauline falling out. It’s a load of old codswallop.

“Pauline just chose not to do Birds Of A Feather. She wants to concentrate on her acting academy, that’s that. 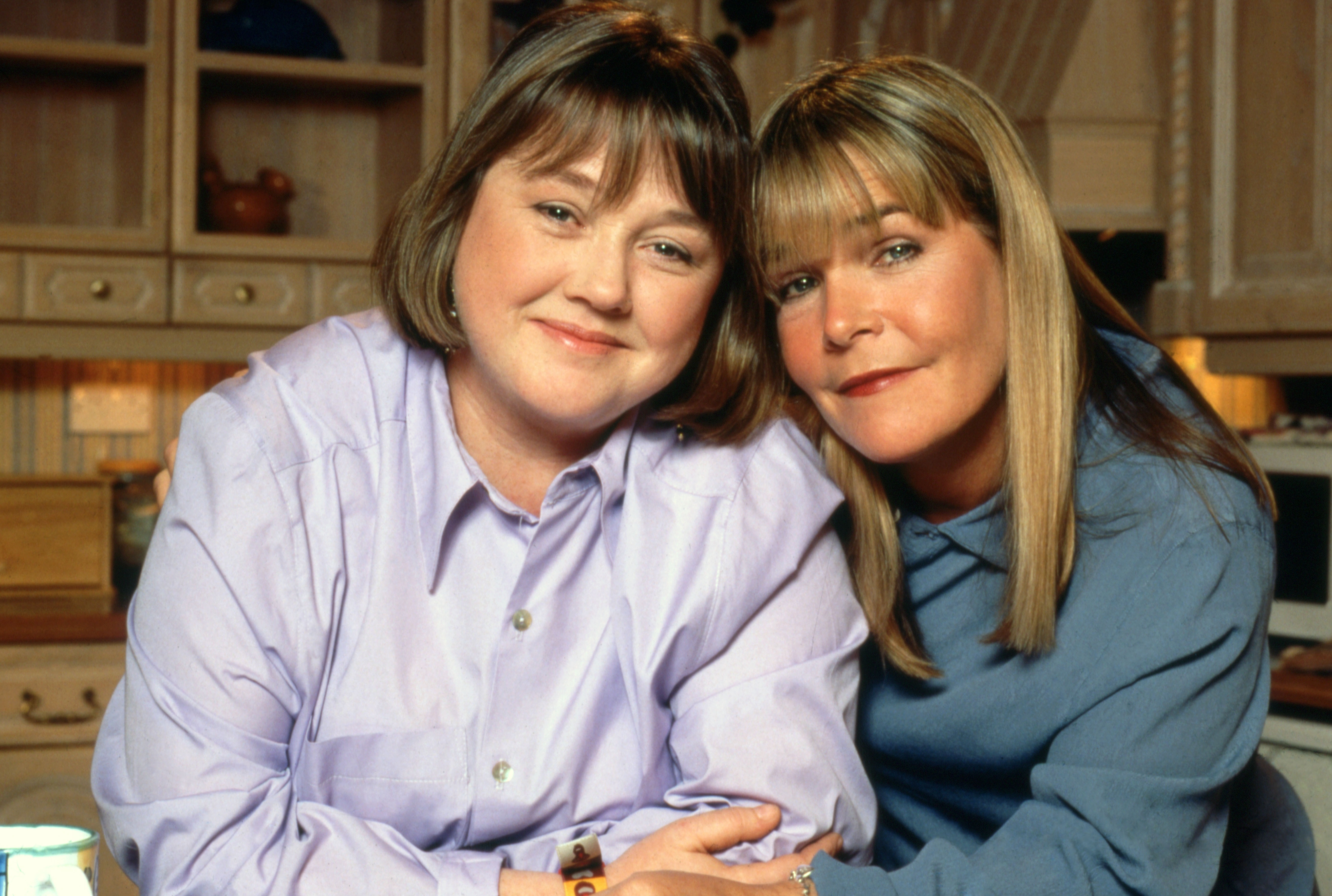 “We’ve known each other since we were ten. We’re friends. Will Pauline return to the show? I don’t know.

“I just know that the Christmas special went down really well. ITV were really, really pleased.”

The Londoners met at Islington’s Anna Scher Theatre School in the late Sixties and first appeared on TV together in Pauline’s Quirkes in the mid-Seventies. 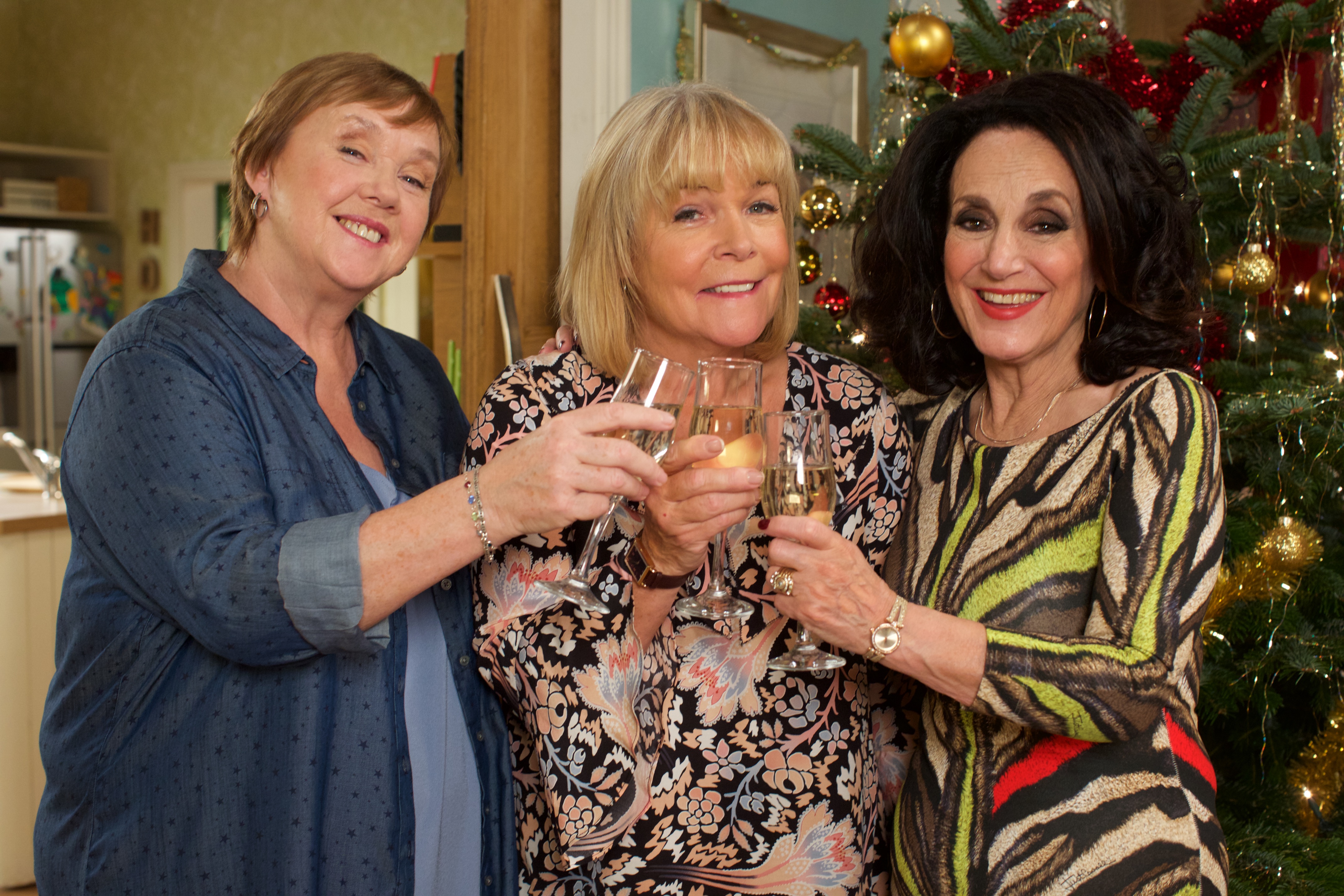 But it was Birds Of A Feather, which once attracted 15million viewers a week, for which the pair became most well known.

Yet in February there were claims that their relationship had broken down after an alleged bust-up on set at the Teddington studios. The row was said to be why Pauline refused to take part in the 30th anniversary show in 2019 and the Christmas special a year later. Linda refutes this.

The telly favourite who has launched new podcast Growing Bolder, which celebrates life after 50, is also close to co-star Lesley, 75, who plays snooty Dorien Green.

Linda said: “She is great. Lesley lives close to me in Wandsworth so I’d go with my husband and we leave things on her doorstep. 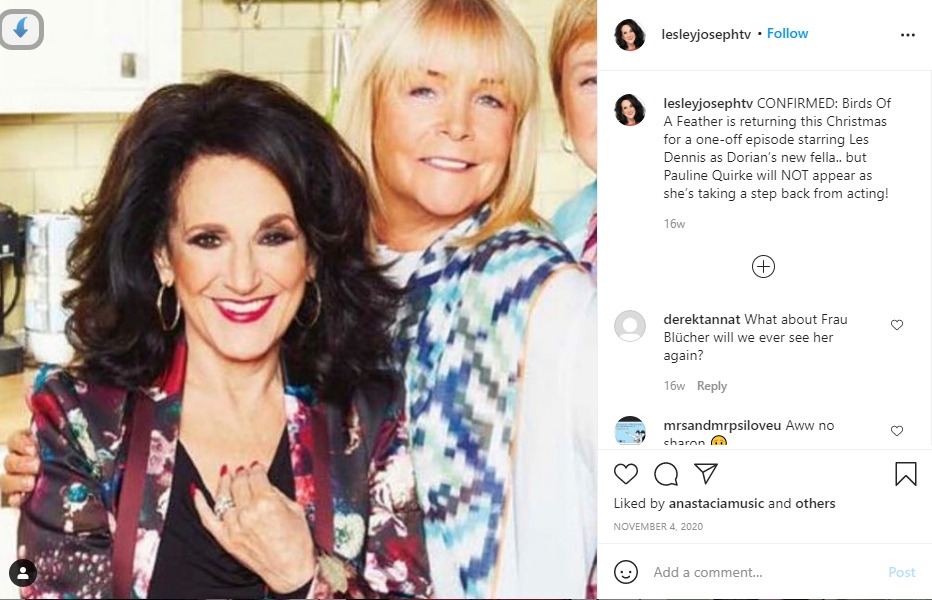 “It’s mostly funny things like lady’s tweezers to pluck the hair on her chin, them sort of things, funny things.

“And then some flowers and that. But Pauline lives in Buckinghamshire so it’s not as easy to get to hers. I’ve not left any funny things on her doorsteps.”

Linda has been married to Mark Dunford since 1990 and they share daughter Roberta, 25, and son Louis, 29. She also has daughter Lauren, 38, from a previous relationship.

Since 2012 she has been a regular panellist on ITV1 hit daytime show Loose Women.

We’ve known each other since we were ten. We
are friends. Will Pauline return to the show? I don’t know

She said: “My nickname is either Nanny Linda or Baggy Mouth because I always say things how I see them.

“Sometimes I get into trouble for it but I always tell the truth. It really is like a family. We’re all there for each other and that’s what I like about being on the show.

“We’ve always got each other’s backs if anything goes wrong, or anything is said that we shouldn’t have said.” Linda credits her Loose Women pals with saving her life after co-star Stacey Solomon rushed her back to London from a girls’ trip in Ibiza in 2018 so she could enter rehab. Linda had turned to alcohol to help her cope with anxiety, and later said she had felt like she wanted to die. 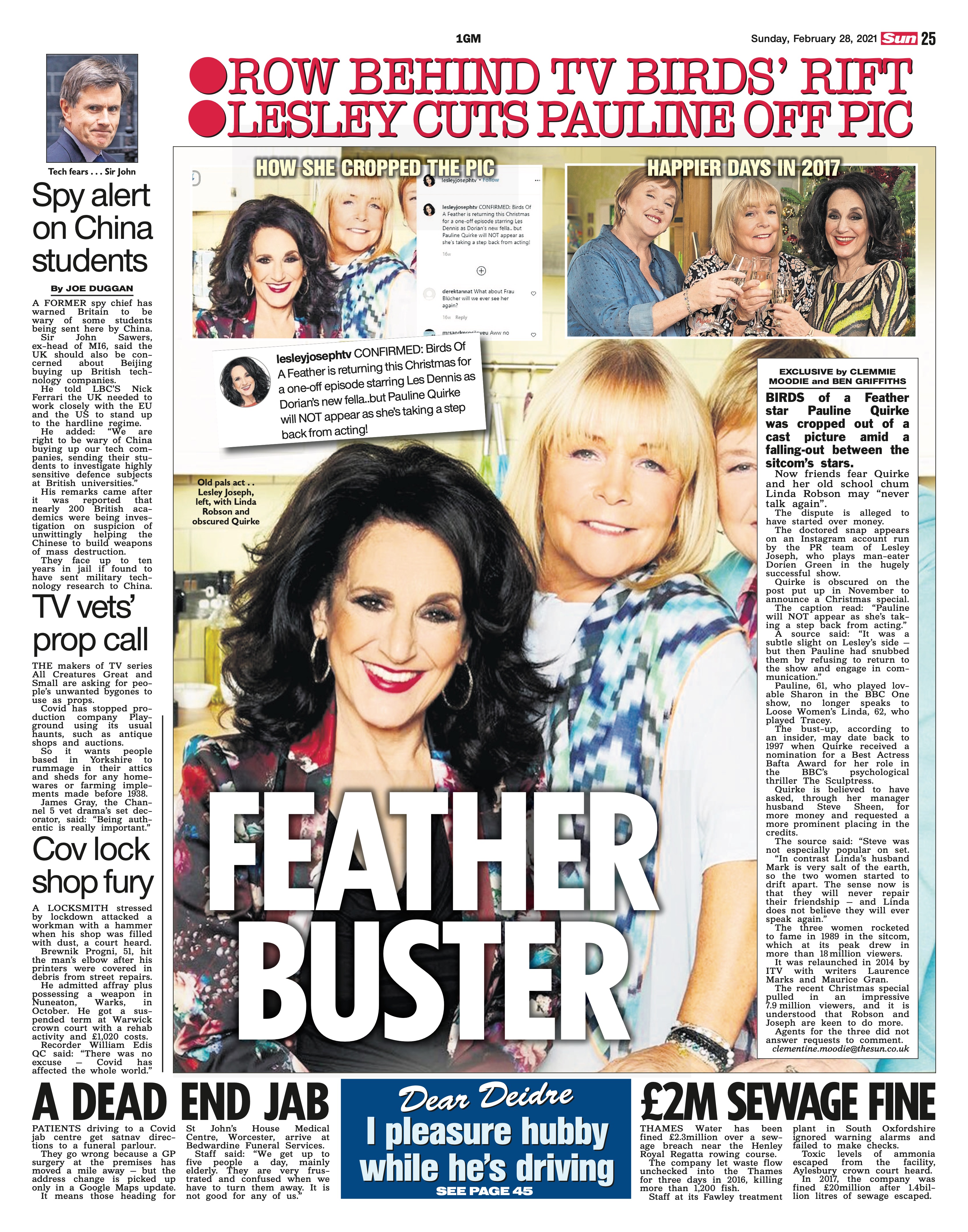 She believes her anxiety stems from 2008, when her son Louis’ friend Ben Kinsella was stabbed to death while the pair had been out celebrating their GCSEs. The 16-year-old’s murder led to anti-knife crime demonstrations in the capital and a review of knife crime sentencing laws.

On her breakdown, Linda recalled: “All the Loose Women were so supportive.

“We were in Ibiza, sort of had a breakdown and Stacey flew home with me early. All of the Loose Women were great. The whole time I wasn’t, so they were ringing all the time. A few of them came to see me and that, so yeah, it was really nice they’ve been brilliant.

“I’ve managed to stay positive in lockdown and I keep busy. Just being able to go to a supermarket to get out of the house, go shopping, that’s been a lifesaver really.

Lesley lives close to me. I leave things on her doorstep like tweezers to pluck the hair on her chin…and flowers

“I’ve cleaned every cupboard. I’ve run out of things to do now. It hasn’t tipped over into how it was before.”

One strange rumour about Loose Women alleged that two of its hosts were more than just pals.

Linda said: “Never in a million years. I don’t know anyone that could be. Everyone is happily married.

“Put it this way, I’ve not noticed any of the other Loose Women looking at me in a particular way.” The show even led to one bizarre encounter with Elton John after Linda had a “sexy dream” about the superstar. 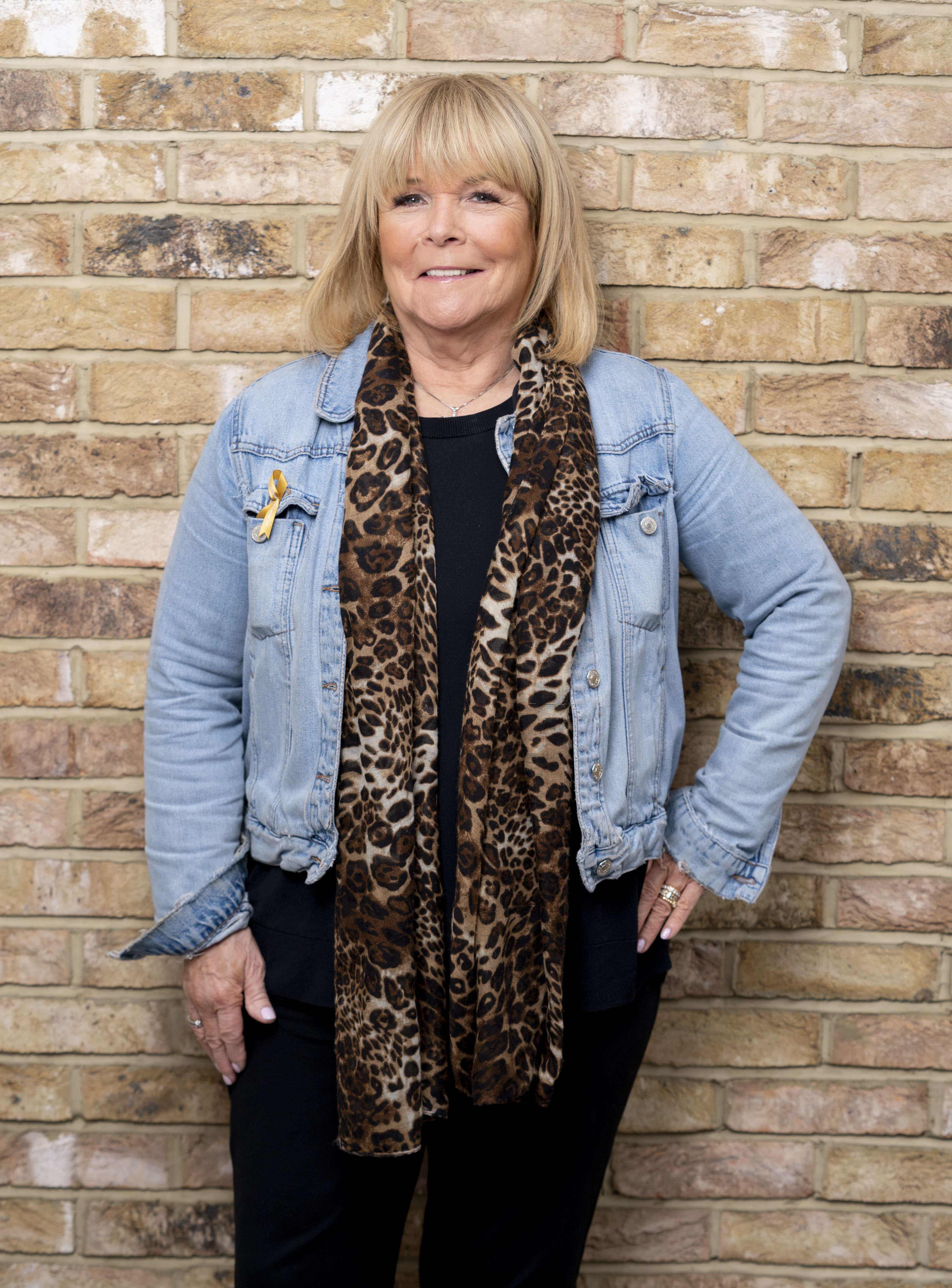 She said: “Loose Women throws up some unlikely meetings. One day I woke up and felt really ashamed because I’d had a sexy dream about Elton.

“I was thinking, ‘I hope my husband Mark doesn’t find out’. It felt so real.

“One of our make-up ladies knows Elton and, because she was going to see him, I sent a note saying, ‘Dear Elton, I just read your book and I loved Rocket Man as well. Do you remember the night we spent together on the Eurostar?”

“A few days later, to my surprise, he wrote back saying, ‘Dear Linda. It wasn’t the Eurostar. It was the Orient Express and we made so much noise they chucked us off’.

“He’s got a great sense of humour. I never expected him to write back, never in a million years.”

While she is still a Loose Woman, Linda is also enjoying her sideline with the Growing Bolder podcast. One episode was about her plucking up the courage to go skydiving. She said: “I’ve done more in my sixties than I did in my fifties. We talk about interesting people and what it’s like getting older and bolder.”

But Linda hasn’t ruled out more acting and is eyeing up one of the biggest shows on telly. She said: “I’d like to do some more drama, too. I acted for years and years, but since Loose Women I’ve become more of a celebrity than an actress so there’s not been many offers. I’d love to do some.

“I’d like to do Line Of Duty. I’d probably be the tea lady.”