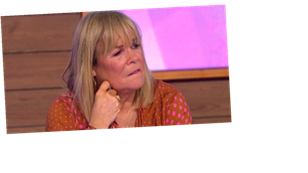 The Loose Women panel brought the heat factor on Thursday's show as they discussed their favourite sexy songs that help create a raunchy mood in the bedroom department.

40-year-old Charlene White turned to Linda Robson to ask her what tune she would like to hear when thinking about getting steamy under the sheets.

Linda hilariously explained that she "wasn't allowed" any devices in the bedroom but if she could choose any melody to make her feel racy, she would opt for Whitney Houston's I Want To Dance With Somebody.

Flooring fans, she later blurted to her co-stars that last time she and her partner got down to business she "broke three bed slats".

The subject soon turned to Valentines Day which with the passionate day approaching this weekend.

Charlene had a number of songs for her co-star's that were suggested to be the best songs to play while romping. Nadia wasn't at all pleased with the selection on offer claiming that Barry White's Can't Get Enough Of Your Love Baby was "awful".

A shocked Charlene chirped back that she'd "never heard anyone" describe the song as that before.

As a celebrity guest of Thursday's show the Loose Women stars interviewed TOWIE star Bobby Norris who has recently trained to become a Covid-19 vaccinator on the front line.

The reality star explained that after being "wiped out for 14 days" with the virus and knowing "awful" it really was he wanted to get involved and help others.

He said needles didn't phase him either, adding: "When my mum had leukemia I was doing her jabs every day so I'm used to it."

At the time of falling ill with Covid-19, like many other celebrities, Bobby was plagued by trolls suggesting he'd made it up.

"I was told that Boris had paid me five grand to go on Instagram and say I had Covid," he revealed.