Television executives aren't the only ones rejoicing over the success of quirky reality program LEGO Masters.

Since the show premiered on Sunday, April 28, major retailers have reaped the benefits, with dramatic increases in sales of the Danish construction toys. 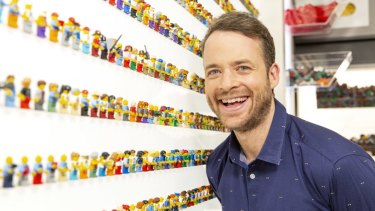 The TV phenomenon, which airs on Nine (the owner of this masthead) and has netted more than 1 million viewers per episode, hasn't just boosted retail sales. The LEGOLAND Discovery Centre in Melbourne's Chadstone Shopping Centre, for example, has seen a 30 per cent increase in business over the past few weeks compared to initial forecasts. Families have been flocking to see the centre's walk-through exhibit, which features intricate LEGO designs similar to those featured on television.

"Not surprisingly, many of them are new fans of LEGO," the centre's general manager, Dave Boyd, said.

"I don't think it gets better than that – someone creating a show around your brand," she said. "It's definitely the most expensive format of advertising at the most expensive time of the day. It's not like a 15-second television commercial."

Dr Liz Giuffre, a senior lecturer in communications at the University of Technology Sydney, said it was clever for LEGO Masters to be aimed at adults, given people aged 18 and over are the ones with the most purchasing power.

"This isn't for little kids," she said. "We see adults on the show and they're making very complicated things – so it's very much for that market. The nostalgia factor's there as well."

However, just because LEGO has been flying off the shelves at major retailers doesn't mean the effect has flowed on to similar products.

Many independent stores don't stock LEGO due to the tight margins, and Ren Hussey, who's been a toy retailer for 25 years, said he hasn't seen a surge in interest for similar products such as Sluban building blocks or wooden puzzles.

"People who want LEGO want LEGO," he said. "They're very passionate. Nothing else comes close. It's like wanting to go out and buy a Porsche but the person behind the counter says, well, it's not a Porsche but here's a Mazda."