“You have no power over me…”

Upon the news of David Bowie’s death in 2016, at age 69, Labyrinth was frequently mentioned in tributes to the iconoclast rock star. On top of his one-of-a-kind discography and always-evolving personas, he also managed to star in and compose music for a Jim Henson-helmed adventure that’s amassed a cult following since its premiere in June 1986, including the likes of Lin-Manuel Miranda and Jonathan Groff, to name a few.

Labyrinth followed teenager Sarah (Jennifer Connelly) as she ventured into a world of surreal landscapes and eclectic creatures in the pursuit of rescuing her baby brother from the clutches of Jareth the Goblin King (Bowie). “It was like a wonderland for me working on that film,” Connelly reminisced with ET in 2015. “And I loved Jim Henson. And David Bowie was so sweet to me,” she said.

Henson and Bowie, along with producer George Lucas, acted as Labyrinth‘s fantastical braintrust behind the scenes. The trio made for a fitting collaboration, with each of their careers having been established by breaking away from the contemporary norms of their respective industries, resulting in massively successful art that changed culture forever. A solid team. The film also benefited from Connelly’s immense talent at just 14 years old (the same age as her character). Her on-screen presence became stuck in the minds of a generation. Some more than others.

“What 13-year-old boy didn’t have a crush on Jennifer Connelly when they saw Labyrinth?” asked Paul Bettany when talking to ET earlier this year. The actors met while filming A Beautiful Mind and later married in 2003. Bettany pointed out the optics of someone eventually marrying their childhood crush. He added, “At the risk of sounding like the longest, most successful stalker that has ever been.”

On top of speaking with the stars and filmmakers on the set of Labyrinth, ET was also invited to Henson’s real-life masquerade ball that led to one of the film’s most celebrated sequences. 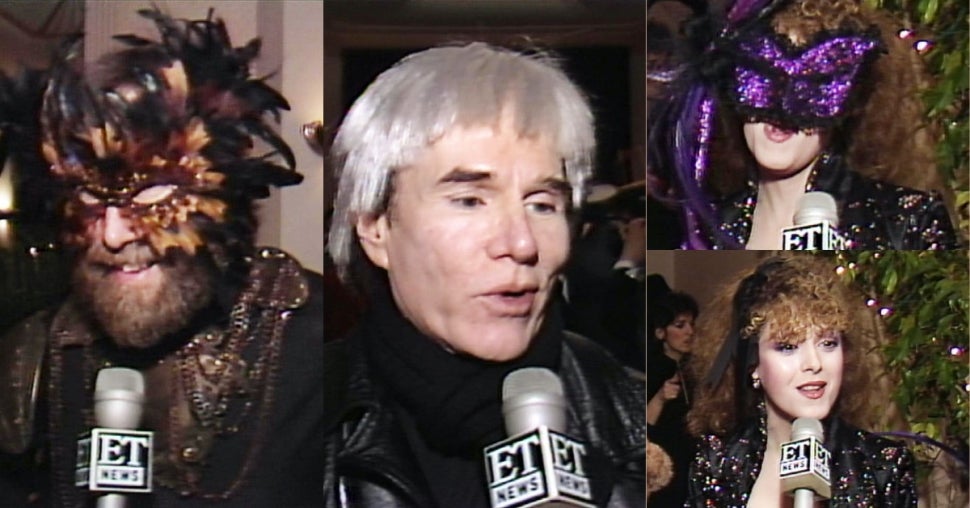 Before cameras had begun rolling, Henson’s other prominent production next to Labyrinth in early 1985 was a special tradition for his employees. A masquerade ball.

“We started this as a lark three years ago and we had so much fun,” Henson told ET from inside the party. He donned a feathered mask and cape for the evening, which ended up looking somewhat tame next to the elaborate costumes around him inside the Starlight Room of the Waldorf Astoria. The guest list mostly featured talented artists and performers from The Jim Henson Company. “We have a wonderful shop of really creative people and given the opportunity to play like this, they come up with some wonderful things.”

But news of the party’s inventive attire got around the New York City nightlife and by the third year, celebrities had made their way inside.

“It’s the best costume party I’ve ever been to,” Andy Warhol told ET. The iconic avant-garde artist later posed for photos with a guest who had come dressed in an Andy Warhol-themed mask. Bernadette Peters called it “the best event of the year.”

When asked about his costume, Henson revealed that he “stole some bits and pieces” from the Labyrinth production, which was two months away from shooting at this point. It was a full-circle moment considering these parties served as inspiration for Labyrinth’s own masquerade ball. Choreographed by Gates McFadden, shortly before she boarded Star Trek: The Next Generation, Connelly and Bowie’s dance sequence went on to provide some of the film’s most memorable imagery.

There was a good reason nobody else could have played Jareth the Goblin King. The role had been tailor-made for Bowie after he accepted the role while the script was still being written. (Henson and Dennis Lee co-wrote the story, while Terry Jones penned the screenplay.)

“David was my first choice for the part,” Henson told ET on the set in 1985. He pointed to Bowie’s trademark “otherworldly,” mysterious aura that made the singer well-suited for the story’s villain. Henson praised this ethereal quality, even if he couldn’t put it into words. “It’s something you can’t quite put your finger on. And at the same time it’s very powerful and it has the ability to go from very attractive to [nearly] villainous.”

Bowie had acted, and many have described his entire singing career as being an enormous piece of performance art, but Labyrinth would showcase his ability to combine the two crafts in a full-length film. He wrote five songs for the soundtrack, including fan-favorite tracks “As the World Falls Down” and “Magic Dance.” While the movie and tone were geared toward kids, Henson had also hoped Bowie’s contributions would make Labyrinth accessible to more demographics.

“It’s done at a level that I think children will [enjoy], but I think David and his music bring in quite an older level,” Henson said.

Having starred in Sergio Leone’s Once Upon a Time in America, Connelly wasn’t a showbiz newbie, but stepping into a Jim Henson production was another experience entirely.

“It’s completely different than I had imagined,” Connelly told ET on set. “I’ve never worked on a film this big with so many different angles and things to do.”

As she was in the middle of filming Sarah’s encounter with the Bog of Stench, Connelly gestured to the nearby swamp set and joked, “As you can see, not everything is full of delight.”

Following the mixed response of 1982’s The Dark Crystal, having Labyrinth feature a human protagonist and antagonist, as opposed to puppets, was a strategic choice.

FLASHBACK: George Lucas On 'Star Wars' And Why You Need To Take Creative Risks In Hollywood

FLASHBACK: George Lucas On 'Star Wars' And Why You Need To Take Creative Risks In Hollywood

“The live person creates sort of a bridge between the audience and these creatures,” Henson told ET in 1986, citing that approach’s previous success throughout The Muppet Show. Putting the main character at 14 years old was another storytelling decision that wasn’t arrived at through happenstance. He called that age the “magic point of adolescence,” believing it’s when people first become aware of their “shifting feelings” about life.

While Henson was adamant about not being heavy-handed with a moral message in Labyrinth, this was also the same person who created Sesame Street. Calling it the “responsibility in the medium,” and following the lead of the classic fairy tales that inspired the movie, he did ensure the story would have a subtext for audiences to connect with.

Henson said, “You can’t really grow up in the course of an hour-and-a-half movie — but you can just go through a little bit of the realization.” 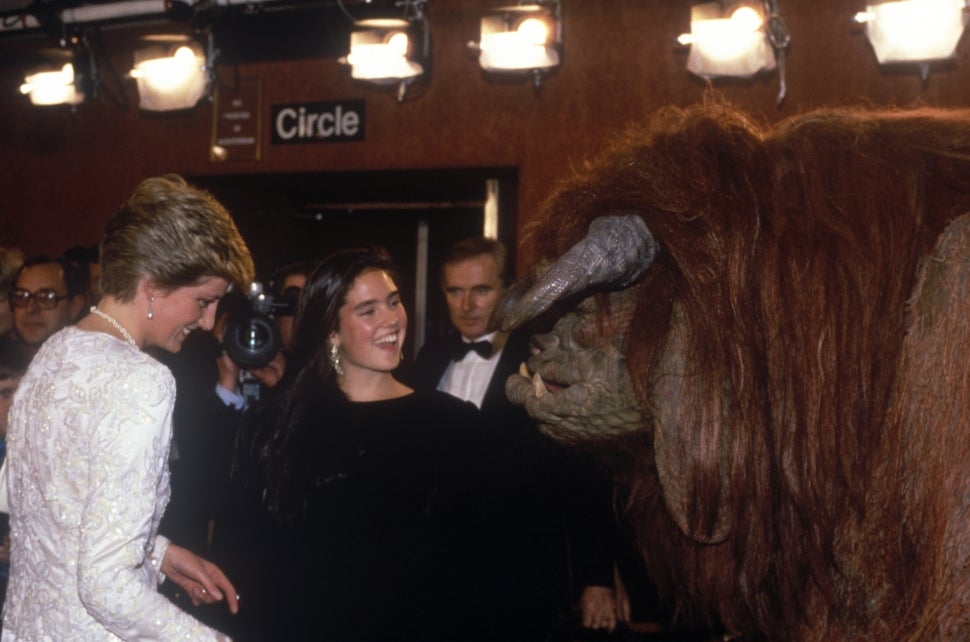 Despite Labyrinth’s mild reception upon its debut, the movie’s fan base began to show itself almost immediately upon home video release. And 35 years later, there’s more than a few ways to gauge its enormous impact on pop culture. (Henson died in March 1990 following a short battle with a rare bacterial infection.)

For starters, it’s getting a sequel. It was announced last year that Scott Derrickson will direct and co-write the follow-up movie, having already proved himself adept at creating M.C. Escher-style action sequences in Doctor Strange.

And while Bowie left behind a mountain of pop hits, chart-toppers and beloved B-side tracks, the intensity of admiration expressed for Labyrinth following his death was an evident testament for the film’s significance.

Kelly Clarkson wrote on Twitter, “So bummed to hear about David Bowie passing. [I’ve] loved him since I saw [Labyrinth] as a kid! Great music & a super innovative artist!”

So bummed 2 hear about David Bowie passing. I have loved him since I saw The Labyrinth as a kid! Great music & a super innovative artist!

Tegan and Sara’s account shared, “So sad to hear David Bowie has [passed] away. His music filled our house growing up. We were obsessed. Probably rented Labyrinth 100 times.”

So sad to hear David Bowie has past away. His music filled our house growing up. We were obsessed. Probably rented Labyrinth 100 times.

Panic! At the Disco, presumably tweeted by Brendan Urie, posted, “The first time I saw Labyrinth, I wanted to be Jareth the Goblin King. The first time I heard ‘Oh! You Pretty Things’ I wish I’d written it.”

Shortly after Bowie’s death, Connelly opened up to ET about her “extraordinary memories” with the groundbreaking artist.

“I think it’s very sad, his passing, for so many reasons,” Connelly shared. “To me, not only was he a genius, he was a genius who had the time to be kind. [That] was my experience of him.”

Following Labyrinth’s premiere, ET spoke with Lucas a year later to get his reaction to the movie’s initial response from audiences.

“It just was one of those films that slipped through the cracks. I think it’s a pretty good film, though,” said Lucas in 1987 from the set of Willow amid his Star Wars sabbatical. A veteran filmmaker in any sense of the phrase, he shared one of his key takeaways from the experience.

Henson told ET, “I try to keep a positive attitude. I believe life is good. I believe people are good and I believe that life is better if you start off with this idea of a positive approach to life.”

Labyrinth is streaming on HBO Max and Amazon Prime Video.

Watch Jennifer Connelly tease her upcoming role in Top Gun: Maverick in the video below!