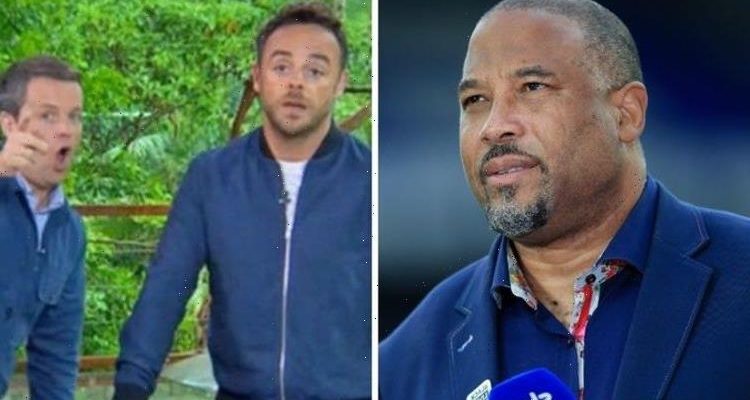 The 57-year-old also claimed he would enjoy being a part of the series. It comes soon after ITV began advertising the upcoming season of I’m A Celebrity… Get Me Out Of Here! fronted by hosts Ant McPartlin and Dec Donnelly. The line-up has not been officially confirmed yet, but several names have begun to circulate on the rumour mill. Among the latest is John Barnes, who talked about taking part in the hit show.

The ex-sportsman commented: “Now that the show is being filmed in North Wales, it probably won’t be an issue.

“But the most daunting thing for me by far would have been jumping out of a helicopter into the bush in Australia, as I don’t deal well with heights.

“And being covered head to toe in snakes would definitely scare me too.

“But in terms of eating, I’d be fine. I’ll eat anything that they put in front of me. Kangaroo testicles? Absolutely fine.”

Talking to BonusCodeBets, which John is an ambassador for, he continued: “Don’t get me wrong, it’s not something I’d choose in a restaurant, but as part of the show I wouldn’t have an issue.

“I’d be happy to be nominated for any eating or drinking trial.

“If I was asked to go on I’m a Celebrity, I would do it. It’s definitely something I’d like to be a part of one day.

“Especially now, given that it’s just around the corner from me, only about an hour from where I live – so I’d probably be able to sneak out of the camp and nip home for a cup of tea!”

Good Morning Britain host Richard Madeley is thought to be heading to the castle to try his luck at the show.

Talking to co-hosts Susanna Reid and Kate Garraway, he addressed the speculation on the ITV show.

“You may say, ‘I couldn’t possibly comment,'” he stated, adding: “It’s ridiculous! When a secret’s out, it’s out!

“And it is true that I’ve been learning a bit of Welsh.”

John has recently been highlighting racism in football after publishing a book last month.

The former Newcastle player wrote ‘The Uncomfortable Truth About Racism’, and has been talking about the book on radio stations to explain his inspiration.

Talking to Times Radio host Phil Williams, John confessed he didn’t think FIFA could “do anything” to tackle racist fans as he claimed he and others need to come to terms with their own internal bias when it comes to halting discrimination.

He explained there was no law the football organisation could put in place which would put a stop to the ever-present issue.

When asked about the correct approach to combating racist fans and whether or not players should walk off the field, he commented: “What’s that going to do?”

He continued: “They’ve walked off the field before. They’ll walk off and forfeit the game and then they’ll lose and then what happens?

“You know what they were banned for in Hungary? It wasn’t for racism – it was for throwing stuff on the field and for violence, that’s what it’s for.

“And this is why I say laws can do nothing,” John added before giving monkey chants as one example of racist abuse heard at games.

“It’s racist abuse, you’ll get kicked out of the ground (for doing that). But if a player walks past you and you scratch your armpit, we know what he’s doing.

“But if you get kicked out the ground, you can then say, ‘I was just scratching my armpit’.”

I’m A Celebrity… Get Me Out Of Here! returns November 21 to ITV.