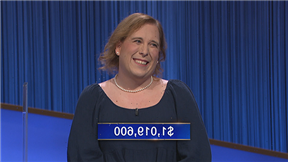 Amy Schneider, an engineering manager from Oakland, Calif., has became the fourth person in the 38-year history of Jeopardy! to earn more than $1 million in non-tournament play. She moved past that milestone in today’s episode of the show.

“It feels amazing, it feels strange,” Schneider said. “It’s not a sum of money I ever anticipated would be associated with my name.”

Schneider’s next attempt to add to her totals will be on Monday.