Andrea, 49, was on the Loose Women panel yesterday when the ITV show was interrupted to show viewers the first images of the royal baby, with the name revealed later in the day.

Meghan Markle, The Duchess of Sussex, gave birth to Archie Harrison Mountbatten Windsor in the early hours of Monday morning, with husband Prince Harry breaking the news to the press on Monday afternoon.

With the news of the name coming after the broadcast of the panel show, Andrea and the Loose Women discussed their reaction to the name Archie chosen by The Duchess and Price Harry at the beginning of today’s show.

However, Andrea admitted she didn’t think Archie was the chosen name for the royal baby to begin with, believing “it was a joke”.

Andrea said: “I thought it was a joke when I first heard it,” with fellow panelist Nadia Sawalha, 54, asking: “Did you really?”

The host went on to explain her reaction: “I did. I thought ‘Oh’ Archie’,” mimicking a laughing tone, before adding: “‘Oh no, it’s real.’

“Because it’s just not a sort of royal sounding name. Maybe if it was Archibald or something like that.

Nadia said: “I love it because it’s very American,” before referring to her own daughter’s name, explaining: “I called Maddie, Maddie, because it’s kind of American sounding.”

However, Nadia remarked: “I too thought, ‘Oh poor thing. It’s called Archibald,’ because that’s what I originally assumed, that it wasn’t Archie and the papers had immediately [just shortened it].

“But I love it, I think it’s really cute” Nadia continued, before Jane Moore, 56, added: “I think it’s a good rough, tough name.” 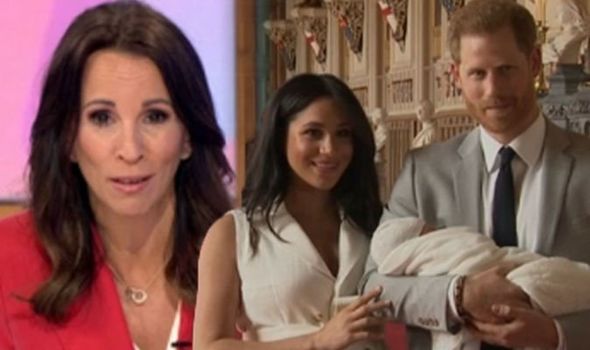 Later on in the show, Good Morning Britain host Ben Shephard, 44, joined the panel and offered some words of advice to Prince Harry on becoming a father.

Ben said: “I think one of the things just document as much as you can. You can’t have enough of that and being organised about having that stuff together.”

Referring to his own children wanting to see pictures and videos of them as a baby, Ben added: “I think that’s the things we often come back to.”

The Duke and Duchess of Sussex announced the name of their official Instagram page yesterday afternoon after The Queen and Prince Phillip met their eight great-grandchild.

“The Duke and Duchess of Sussex are pleased to announce they have named their first born child Archie Harrison Mountbatten-Windsor.” 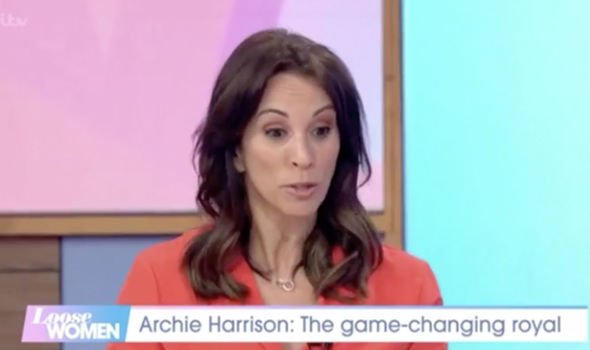 The post continued: “This afternoon Their Royal Highnesses introduced Her Majesty The Queen to her eighth great-grandchild at Windsor Castle. The Duke of Edinburgh and the Duchess’s mother were also present for this special occasion.”

On yesterday’s edition of Loose Women, the late Princess Diana’s former personal psychic Sally Morgan, 67, appeared on the show to offer her predictions on the name.

Sally told the panel: “I’ve got my own personal name, I think it will be Alexander and Xander for short.

“I think he [Prince Harry] needs to maintain the tradition, even though they’ve done things differently.”

Asked if she thought the baby would gain a royal title, Sally explained: “I think Meghan wants her child to have a royal title.

“She is very different to Princess Royal, and as much as she wants normality I do think the Queen will offer her and she wants to please the hierarchy.”