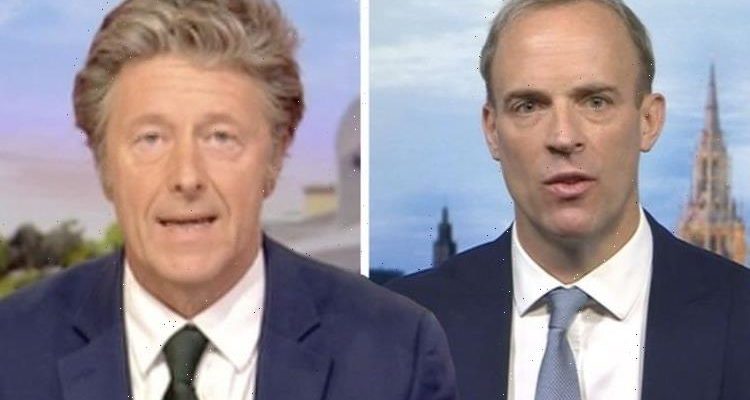 Charlie Start interviewed Dominic Raab about the situation unfolding in Kabul, Afghanistan on Tuesday’s BBC Breakfast. The presenter claimed the intelligence the UK government was receiving was “out of touch” but the MP argued “no one saw” the crisis unfolding with such “scale or rapidity”.

Stayt said: “Why did things unravel so quickly in the way they did?

“I know you were on holiday at the time, some of these are just timing issues but I know President Biden too was away when this happened.

“It seems like the intelligence you were receiving was completely out of touch with what was going on on the ground.”

Raab replied: “Well the situation in Afghanistan has been incredibly fluid. We’ve been monitoring this not for just the last week but since 2020…”

“Well the monitoring went wrong,” Stayt interrupted. “You didn’t know that it would unfold this quickly. You might have been monitoring it but that went wrong.”

“Can I explain to you the background?” The MP asked. “Since 2020 and the Doha agreement and the projected US withdrawal which was for May and then it was extended to September, we’ve been looking at this very carefully.

“I think you’re right, we didn’t anticipate the scale or rapidity of the situation, we thought it would happen more towards the autumn and much more gradually.

“And, of course, there was still this question of whether the civilian government that we saw in place before, the Afghan government, and the Taliban would come to some sort of arrangement,” he continued.

BBC Breakfast airs everyday at 6am on BBC One.