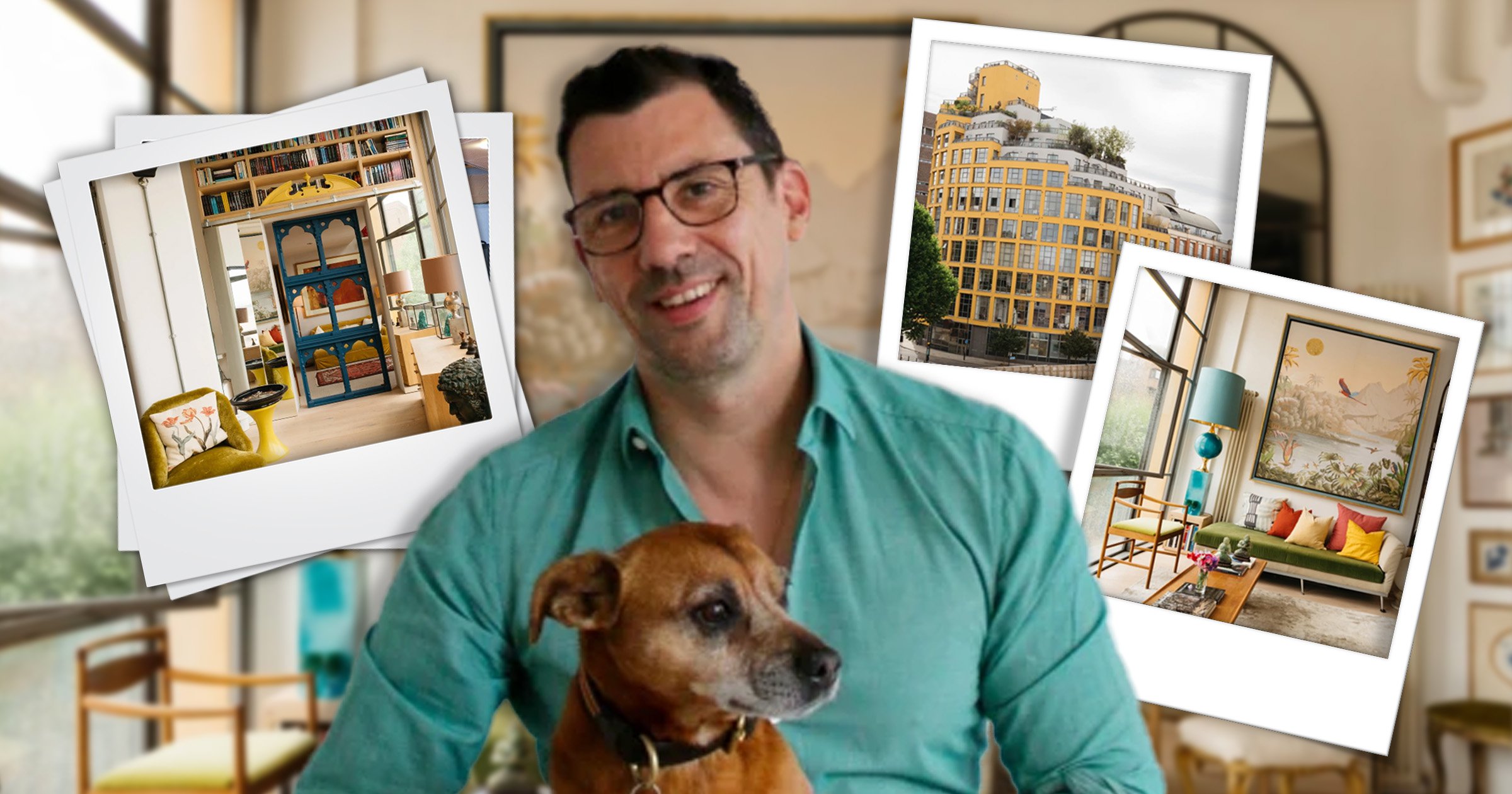 Oscar Wilde’s maxim that life imitates art is as relevant today as it was in the 19th century.

Art, believed the Irish wit, poet and playwright, affects the way we view the world around us, influencing our beliefs, passions and experiences.

In the case of novelist and craftsman Damian Dibben, this couldn’t be more true – his love of art informs the very essence of his work, permeating his novels, his artisanal projects and, above all, his exquisite London home.

Damian, author of epic trilogy The History Keepers, about a family of time travellers, has seen his books translated into 27 languages and published in more than 40 countries. But it is his latest novel, The Colour Storm (Michael Joseph, £14.99), that is indelibly tied with his apartment in SE1 building Bankside Lofts.

Here, at his hand-crafted table in his light-filled open-plan living space, Damian spun the opulent tale, with elements of both love story and thriller, featuring some of Venice’s most admired High Renaissance artists hunting desperately for a dazzling new pigment that will transform their work and fortunes.

‘Colour,’ writes Damian in the book, ‘is the subject of every artist’s sigh, the reason we wake up in the morning and escape into dreams at night.’

The two-bedroom, triangular-shaped apartment, on the second floor of the 120-home Piers Gough-designed building, is full of riotous colour itself; in the classical prints and oil paintings, a cabinetry full of curiosities, and in lighting and furniture.

Even the exterior fabric of the award-winning building, constructed in the mid to late 1990s on the banks of the River Thames, opposite St Paul’s Cathedral and with a former Victorian cocoa warehouse at its heart, uses colour to bold effect: a curved 1950s office building that was incorporated into the scheme, extended out and sideways to form a terraced tower, features distinctive yellow-ochre rendered window frames.

‘I bought the apartment about 25 years ago, when I was still in my 20s, and the building was in its final stages of completion,’ says Damian, who shares the home with his partner, Ali Lowry, brand director of upmarket curated travel site Plum Guide, and their two rescue dogs, Daphne and Velvet.

‘I had been viewing an ex-council flat, which was really drab and poky, but when I looked the window I could see Bankside Lofts, on Hopton Street. I made a beeline straight for it, and put down a deposit that day on the show apartment, the only one that was still up for sale.’

It was a move that proved Damian to be bang on the zeitgeist.

‘My friends thought I was mad as the River Thames hadn’t yet had its comeback moment,’ Damian says. ‘Since then, I have watched Tate Modern become a global destination, was one of the first ‘wobblers’ on the Millennium Bridge, and seen Borough Market reinvented into one of Europe’s most incredible artisan food destinations.’

On buying the apartment, Damian – who grew up in South Kensington and Pimlico, whiling away many hours in the V&A and Natural History Museum, which fuelled his passion for everything from design and dinosaurs to travel, cosmology and archaeology – immediately set about tweaking the 1,110sq ft of interior space.

‘I loved the fact that every home in Bankside Lofts is completely unique, and I loved the light and height of this one, but I did change the layout a bit,’ he says.

The addition of a geometric-shaped wooden staircase leading up to a decked area above one of the bedrooms effectively gave it its own self-contained living space, and in one of the two bathrooms he removed a glass-brick wall feature – recognising it was soon to be become a bit of a design cliché – incorporating a wraparound image of space taken by NASA instead.

He transformed a corridor running through the centre of the flat into a dressing room for the main bedroom, while also lowering the bedroom’s ceilings.

‘I’ve essentially done lots of tinkering around,’ says Damian, who started out as a scenic artist painting backdrops, murals and prop pieces for film and TV, and has also been an actor. He called on a friend to create his plywood kitchen, and has also laid engineered wooden floors throughout the apartment.

In the main 26ft 7in by 18ft 18in open-plan living space, with its floor-to-ceiling wall of Crittall windows and built-in bookshelves holding thousands of volumes, the eye is immediately drawn to an oversized bright blue Barbier lamp, bought for several thousand pounds in the Paul Smith store on Albemarle Street, W1.

It sits next to a blue-velvet chaise longue from Made, with a vibrantly hued tropical vista of two panels of hand-painted wallpaper by De Gournay fastened to a canvas and framed. Damian’s friend, the illustrator Josie Jammet, added a parrot to the scene.

‘I find beauty in just about everything,’ Damian says, ‘which means the collection is always evolving, and I am forever  adding things.’

Whether it’s an Old Master painting, a carved marble bust of a Roman emperor, a lovingly restored tapestry of Venus and Adonis or an American 1950s paint-by-numbers kit, everything is given equal importance in the home.

A cabinet of vintage nuts and bolts is as much of a joy to Damian as a display of vividly coloured corals bought in California, or his green crystal Buddha statuettes, ‘passed down from my grandmother, which look like something you would leap across a ravine to rescue in an Indiana Jones film’.

Most recently, he has reconfigured a salvaged gothic altar rail to make a room divider. Something of a Renaissance man himself, Damian has always loved designing, building and decorating.

‘I find it very therapeutic, especially after days of bashing away at a computer,’ he says. ‘Sometimes my schemes end with hammered fingers and swearing at inanimate objects, but I occasionally get things right. I’ve built many of the things in the apartment myself – tables, lightboxes and bookcases with secret doors.’

Writing The Colour Storm, with its themes of drama and decadence, also inspired him to delve more deeply into his roots as an artist.

Although he is currently planning out his next novel, he is also busy designing a collection of furniture, which he plans to sell at a pop-up event later this year. With a country home near Midhurst, in West Sussex, Damian has use of a workshop in the grounds of the farmhouse owned by their good friend, celebrity florist Nikki Tibbles, founder of Wild At Heart.

In fact, the lure of living in the countryside full-time is proving strong, and Damian and Ali have decided to move there, putting their Bankside Lofts home on the market for £1.2m.

The next chapter in this unique apartment, then, is in need of a new character.

For more information on Damian’s work check out his website.