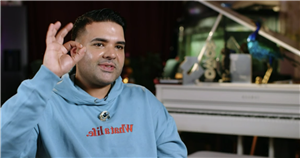 I'm a Celebrity… Get Me Out of Here! fans are sure they've spotted Naughty Boy telling a rather naughty fib during the 2021 series premiere.

The DJ made his appearance alongside ex-BBC Breakfast presenter Louise Minchin – who quickly confided in him that she was a big fan of his music and listens to it all the time.

They were soon tasked with the annual walk the plank challenge, with Naughty Boy going up against Snoochie Shy in the challenge – and failing to press his button first, being sent plummeting into the air before his harness caught him.

But during his introduction to camera, Naughty Boy let slip that he'd won a Grammy – when in reality, he has only ever been nominated for one.

He was nominated for Album of the Year back in 2014 for his album In The Lonely Hour – but didn't manage to come away with the win.

Instead, the honour went to Beck's Morning Phase.

Fans on Twitter didn't hesitate to point out his blunder, with one posting: "Not Naughty Boy calling himself a Grammy award winner! #ImACeleb."

Someone else quickly replied: "CRYING!"

As another viewer echoed: "Why did Naughty Boy say he won a Grammy? LMAO!" with a screenshot of his Grammy history – showing that he has one past nomination.

A fourth fan penned sarcastically: "Naughty Boy may have won a Grammy… but not Red Light Green Light!"

The star has, however, been awarded several awards during his expansive career, including two MOBO Awards and two accolades at the Brit Asia TV Music Awards.

Naughty Boy was also sure he'd risen to victory in the first challenge, as he squared up to Snoochie Shy in the walk the plank trial.

As Ant and Dec prepared to announce the winner, Naughty Boy could be heard whispering to himself: "It's me."

And he seemed confident going into the challenge, as he boasted Snoochie would be the one plummeting into the abyss.

But he was the one to lose and dangle by his harness, leaving him in the losing team for the challenge.

Naughty Boy may now be a hugely successful musician and record producer – but he didn't start out his career that way.

He actually first appeared on a TV game show back in 2007, when he starred in the Noel Edmonds fronted Deal Or No Deal and beat the banker to win £44,000.

The impressive prize-pot reportedly helped him to upgrade his music production set-up from a home studio in his garden shed to an Ealing-based studio in West London.

I'm a Celebrity… Get Me Out of Here! continues tomorrow at 9pm on ITV.