Dr Hilary Jones, 67, has offered Good Morning Britain viewers expert medical advice throughout the Covid-19 pandemic and has explicitly stated the severe consequences of the disease spreading. When the brother of former Labour Party leader Jeremy Corbyn, 71, Piers Corbyn, 73, made his opinion very clear about coronavirus, the general practitioner didn’t hold back and claimed the guest was a “dangerous man”. As the pair debated the idea of modern medicine aiding the battle against the illness, they continually spoke over the top of one another as the ITV star savaged the political activist. 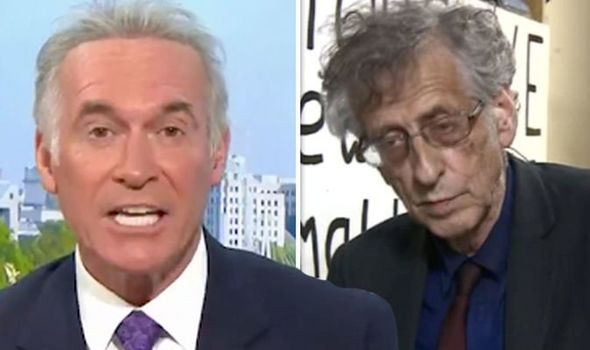 Asked by hosts Piers Morgan, 55, and Susanna Reid, 49, about what he’d heard from Corbyn about the “lies” the Government is supposedly spreading, Dr Hilary hit back with force.

“It’s extremely dangerous what we’ve just heard,” the GP stated, before going into detail on how the virus is not fictional, with a plethora of scientific evidence to support its existence.

The medical expert continued to reiterate the guest was “dangerous”, to which the political activist claimed he was getting no answers about how a vaccine would help the spread of coronavirus.

As their fiery altercation came to an end, Dr Hilary stated the guest “should not be allowed air time” before his colleagues challenged the political activist once more.