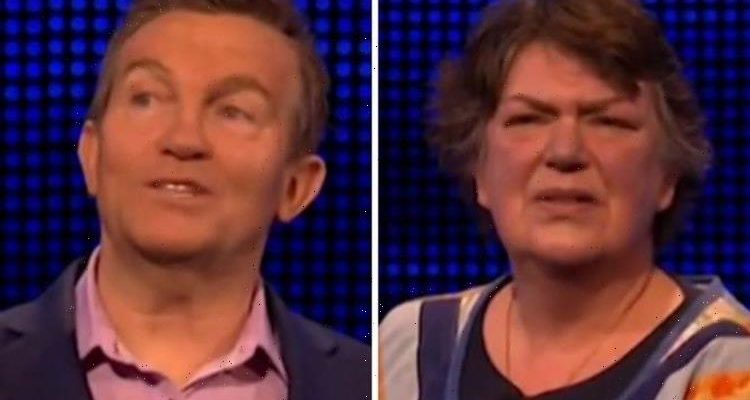 The Chase: Bradley Walsh by question asked to contestant

The Chase host Bradley Walsh returned with a new episode on Wednesday afternoon with four new contestants ready to take on the Chaser. During the first contestant’s second round against Shaun “The Dark Destroyer” Wallace, Bradley yelled out in anger over the “unfair” question they were given.

After building £3,000 in the cash-builder round, it was time for contestant Jill to face Shaun Wallace and get back to the table with her teammates.

Shaun offered Jill a low offer of £1,000 and a higher offer of £27,000, which after consulting with her teammates, Jill decided to stick with the £3,000 she had built herself.

After successfully answering two questions, Jill’s third question was: “In what year were the princes in the tower thought to had died?

“You could have said 1363, 14 something and 15 something, give us a bit of a change they’re right next door to each other, what chance we got? Unfair!”

Jill, unfortunately, answered the question wrong after putting option A. 1463, when the correct answer was C. 1483.

Despite getting the question wrong, Jill was able to outrun Shaun and make it back to her teammates with £3,000 in the bank.

His teammates all said they felt confident in him to be able to win the £35,000 but wanted him back at the table for the Final Chase.

Jack went with their advice and played for the £5,000, but he was unable to beat The Chaser and was caught one from home.

The third contestant to take on Shaun was Pippa, who again built £5,000 in the cash-builder and decided to stick with this amount to play for.

Sadly, Pippa wasn’t able to answer a single question correctly and was caught by Shaun after three questions.

Last up was Peter, who built an impressive £8,000 in his cash-builder, giving Jill hope that she wasn’t going to be the only contestant in the Final Chase.

She told him: “You can certainly do the eight, but it would be wonderful if you did the £67,000 how confident do you feel? I think you good enough but do what you want.”

Peter went for the higher offer. However, was caught by Shaun after only answering one question correctly.

This meant that Jill was left on her own in the Final Chase and was playing for the £3,000 she had brought back to the table.

Putting in her best efforts, Jill only gained 10 steps ahead of Shaun but was comforted by Bradley as he told her it was difficult to do on her own.

However, despite Shaun getting one question wrong, he managed to catch Jill with one minute and five seconds still remaining.

Jill thanked both Shaun and Bradley and expressed her gratitude for being able to take part in the show.