Unsurprisingly, procedurals are dominating the broadcast landscape, but the Season 2 premiere of Ghosts has managed to pull through as the only comedy to crack 10M total viewers after 35 days of delayed viewing, which includes DVR and some VOD. Out of the top 30 season premieres, the sophomore series sits at No. 6 on the chart.

60 Minutes has pulled ahead of the network’s scripted series to become the most-watched broadcast debut this season with nearly 10.9M people tuning in, according to Nielsen. That’s not a huge lift from the roughly 10M who watched live during the September airing, though.

The network’s scripted series have faired more impressively in terms of additional viewership over the 35-day window. The top three most-viewed is rounded out with CBS’ Blue Bloods (10.8M) and FBI (10.3M) — each up roughly 4M compared to live+same day.

Out of the 10 most-watched broadcast premieres this season, seven are from CBS. Equalizer and Young Sheldon also made it. Unsurprisingly, the rest of NBC’s One Chicago block is also in the top 10.

In terms of new series, CBS is also leading the pack. The debut of Fire Country is the most-watched series premiere of the fall TV season after 35 days of multi-platform viewing. The October episode managed an audience of 8.7M, which is up nearly 3M from its live+same day viewership.

East New York is No. 2 in terms of series premieres with 7.4M. That’s an increase of about 2M from its 5.2M live+same day audience. ABC’s Alaska Daily has eked out the third place spot, securing close to 7.1M total viewers since its premiere, but CBS’ So Help Me Todd is trailing close behind with about 7M.

The fall numbers take into account live + 35-day viewing data for episodes that aired between September 3 and October 9. For episodes between October 3 to 9, 28 days of viewing data is used.

Here are all the shows in the Top 30: 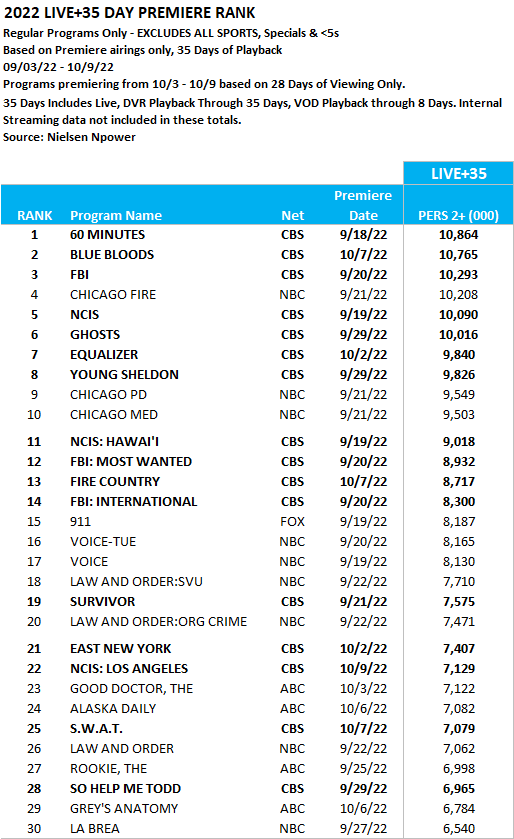 ‘Everything Everywhere All At Once’ Leads With Eight Spirit Award Noms; Full List