Mariah Carey has seen Free Guy and given it her highest praise: It’s a moment. If you read that sentence and are wondering what the Elusive Chanteuse has to do with a popcorn flick starring Ryan Reynolds, then you evidently have not seen Free Guy and should read no further, because we’re going deep into spoiler territory to discuss some of the biggest surprises and reveals. So, I repeat: Big spoily spoilers for Free Guy below.

In Free Guy, Reynolds stars as Guy, a nonplayable background character in a Grand Theft Auto-esque open-world video game. Until he hears Jodie Comer’s Molotov Girl singing Carey’s 1995 chart topper “Fantasy,” gets heart eyes for her, and then learns his entire world is a game that’s about to be shut down by a megalomaniacal CEO (played by Taika Waititi). And so Guy must do what he’s never done before: Save the day, and do it to the melodies of a sweet, sweet fantasy, baby.

The movie culminates in a tweenager gamer’s dream melee, an IP palooza of Easter eggs and surprise cameos — the most unexpected being from the First Avenger himself. As Guy battles a super-swole version of himself named Dude (also played by Reynolds), he works his way through several iconic weapons, including a lightsaber and Captain America’s star-spangled shield. When the latter is revealed, Free Guy cuts to the world outside the game, where Chris Evans is seen watching on a live stream.

Director Shawn Levy sat down with ET for a spoiler-filled discussion of how the movie’s biggest cameos (which also include the late Alex Trebek) came to be, what it took to get Mariah Carey’s blessing and whether he and Reynolds might continue their collaboration with Deadpool 3.

ET: We need to talk about “Fantasy.” How did Mariah Carey end up as the sort of theme song of this movie?

Shawn Levy: There was a different song in the movie. It was– Oh my God, it’s by The Outfield. And it’s a good song! But I remember early, early on, Ryan said, “I have this crazy idea. I think that the anthem of the movie should actually be ‘Fantasy’ by Mariah Carey.” I was like, “That old school classic?” He’s like, “Yeah. What song is better and happier than that?” And it felt like it made sense, lyrically — because it’s about Guy, Ryan’s character, having a fantasy girl — but it also just has a joyous, buoyant spirit to it. And that was the spirit of this movie from the very beginning. I mean, my gosh, we used that song everywhere in the movie, everywhere in our marketing and in the third act, when things get a little more emotional, we do this ballad cover of “Fantasy” [with] lead vocals by Jodie Comer.

Is that something that went through regular licensing channels? Or did you have to write Mariah a letter explaining this movie and how the song would fit in?

Both. There were, like, lawyers talking to lawyers, blah blah blah. But ultimately it was about Ryan and I — mostly Ryan, because he knew Mariah a bit already — explaining here’s the movie, here’s the spirit of the movie, it’s a video game idea but it’s not a video game movie only, and she later watched the movie and was incredibly supportive of us using her song everywhere and rerecording this cover of her song.

I would move Heaven and Earth to be at that screening sitting next to Mariah.

I wish, man. I wish. It was all during lockdown, so everything was done separate and through links.

The Fox-Disney merger didn’t happen until about a month before you filmed this. At what point in the process did you realize you’d have access to lightsabers and Marvel and get to play with those Easter eggs?

It was right before we started filming. We already had a third act where Ryan’s character Guy was leveling up and had access to cool weaponry and portal guns and gravity guns and, you know, the unicorn mace from Fortnite, etcetera. But once we realized wait, Disney now owns the studio that owns our movie, we were like, well shoot, they have the greatest toy chest around! And if I were Guy and if I could gather any piece of weaponry that I ever dreamed of, it would definitely include a lightsaber. It would absolutely include Cap’s shield. So, we wrote a letter to Disney and said, “Hello, I am Ryan Reynolds and Shawn Levy. We are making Free Guy, as you know. You now own us. Can we please use one of these fancy iconic devices?”

And we got a response and the answer was, “Yes.” And we sent an email back saying, “Sorry. To clarify, which one?” And we got an email back saying, “All of them. You can have all of them.” We were beyond stoked. And once we had that, then Ryan was like, “Wait a second, Chris Evans is in the same town we are shooting his Apple show, Defending Jacob. I’m going to text him and ask him if he’ll come by and be in the movie.” I guess that’s a thing movie stars do. “Hi, movie star. I’m your fellow movie star. Want to come be in my movie?” Chris Evans, being a cool, good guy, was like, “If I can come by and literally be in and out in 10 minutes, I think I can slip it in.” So, that’s what happened. That’s how we ended up with Chris Evans, in addition to a lightsaber and a Hulk fist and Cap’s shield.

That’s crazy. How did you possibly manage to keep that a secret?

People have alluded to the Marvel and the Lucas things, although no one is loudly ruining it for others yet. We’re talking before release, but I don’t think anyone realizes Channing [Tatum] has a pretty big part and nobody is talking about that. And I’m really happy that’s being kept under wraps. But the Chris Evans cameo is so perfect. And when I’ve seen the movie with audiences, the explosion of cheers and laughter at that moment is really gratifying. It’s like a director’s dream.

One of the cameos that has been teased in the trailers but is so special is Alex Trebek. What was it like pitching him to be a part of this and getting to direct him in his element?

So, I should say that I was editing the movie, and so it was a small crew that went and shot [that]. And frankly, we used the Jeopardy cameras and set and we got the footage. We would sit there in the edit room and Ryan was there with me — we produced the movie together in a very hands-on way — and we would come up with ideas well into post-production. And we were thinking, “How do we convey to the audience that Blue Shirt Guy has gone viral and is part of the culture?” We had this idea that if you’re an answer on Jeopardy, you’re real. You’re a thing. So, we just asked. On this movie, whether it was Alex Trebek or people like Hugh Jackman and Tina Fey and Dwayne Johnson doing cameos as the voice of several characters, we just asked and in this particular instance, on this particular movie, everyone said yes, to our great thrill.

I feel like the moral of making this movie is ask for what you want. Because you’ll probably get it.

Honestly, that happens to overlap with one of the themes of the movie. But yes, I have four daughters and one thing I’ve tried to teach them is “Ask! The other person can always say no. You don’t need to take that responsibility on. But if you don’t ask, you don’t know if it might’ve been yes.” I’ve learned that many, many times over the years. 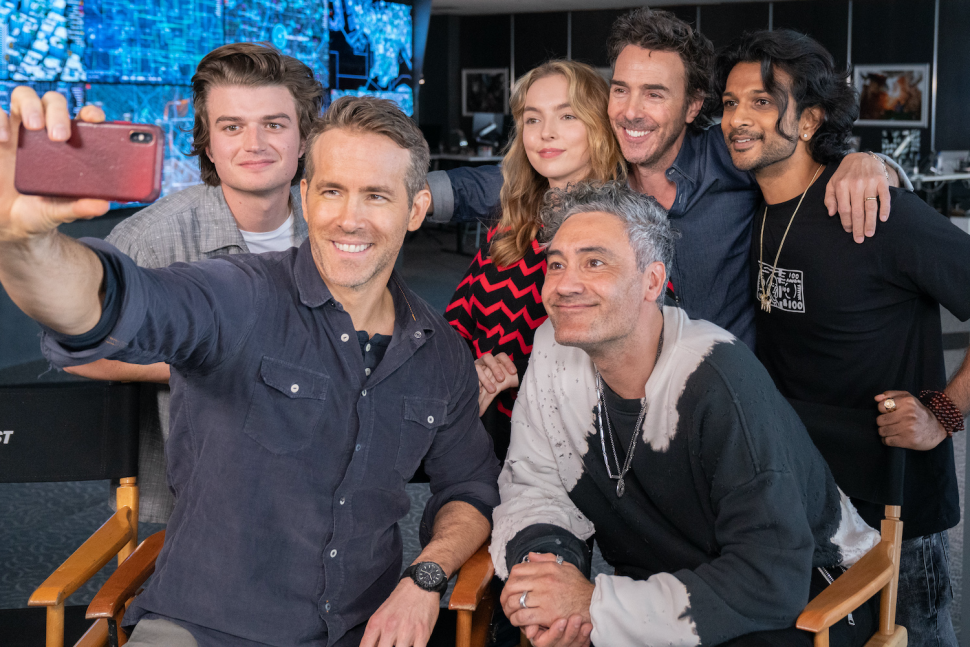 It sounds like making this movie was such a special experience for everyone. When you look back, do you have a standout memory that has come to encapsulate your Free Guy experience?

I do, actually. While we were making the movie, we realized that the audience needed to root for the Jodie Comer-Ryan Reynolds storyline, but they also needed to be satisfied and root for Joe Keery and Jodie Comer in the real world. So, Ryan and I would go from Boston to New York on many weekends, we would take the train and we would sit at one of those tables — and we wouldn’t sit across from each other, we would sit side by side with a laptop between us — and we would rewrite and write new scenes for the movie together on that train and then shoot those scenes the next week. Those train rides are my personal favorite memory, because it not only sums up the comfort of that collaboration and the brotherhood Ryan and I found, but it’s also about what every director will tell you: “Listen to your movie. Your movie is going to tell you what it wants if you’re listening to it while you’re making it.” And that’s an example of that.

Before I let you go, as much as I think everyone will want a Free Guy sequel after seeing this, I kept thinking you would do a damn good job at directing Deadpool 3 over at Marvel. The closest we’ve gotten to Ryan reprising his role has been doing promo for this movie. So, by chance have you talked about the future of Deadpool and getting you in there?

That’s going to be a big no comment. [Laughs]