In a entertainingly frank interview published last week, the legendary Anjelica Huston indicated she wouldn’t be caught dead starring in an “old lady cheerleader movie,” meaning one of those patronising romps where a band of senior citizens get together for a last hurrah.

A few days later, Huston's comments prompted a no less candid response from Australia’s own Jacki Weaver in her capacity as a co-star of Poms, the old lady cheerleader movie of the moment.

This feud in the making is already more gripping than anything in Poms itself. Limply directed by Zara Hayes, whose background is in TV documentary, the film proves to be exactly the kind of bland counter-programming Huston was complaining about, a niche product with a degree of unconscious contempt for its intended public.

The awkwardly pandering approach is conveyed, quite aptly in one sense, by Diane Keaton, a known quantity whose mannerisms have changed little in the past 40 years. Hers is the stance of a personality never free from self-monitoring, leaning forward with anxious eyes and a strained smile that freezes into distaste when a conversation goes awry.

Keaton plays Martha, a former teacher alone in the world who moves out of the apartment where she’s lived for 40 years and into a retirement community named Sun Springs. Here she hits on the idea of forming a cheerleading squad among the residents to compensate for what she missed out on in her younger days.

This scheme is immediately resisted by the preening Southern belles who dominate the community and behave like stereotypical mean girls in high school (or, in the case of Celia Weston as their leader, like the stuffy dean in Animal House). But Martha finds an ally in her disreputable neighbour Sheryl (Weaver), a highly sexed over-sharer who explains that her only hobbies are “poker and poking”. 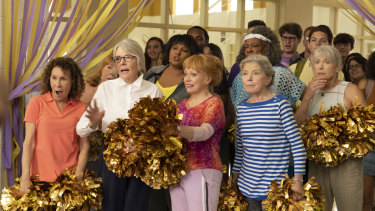 Martha and her newfound friends may be cheering “for themselves” but the message of empowerment remains a little fuzzy. When the squad members take turns to nominate their strengths, it doesn’t seem to occur to anyone that looks aren’t the only thing worthy of mention.

Likewise, the intended celebration of group friendship is undercut by the fact that the members of the squad aside from Martha and Sheryl are at best minor characters and at worst not characters at all.

While Poms may not feature Huston, it has an asset of potentially equal value in Pam Grier, whose name will be forever associated with the blaxploitation movies of her youth – and with the majestic comeback she made two decades ago in Quentin Tarantino’s Jackie Brown.

Going into the film, I pinned many of my hopes on her. But she’s given only a handful of lines and close-ups, and hardly a single trait she can call her own, beyond the suggestion that men continue to find her attractive.

Surely, whoever originally cast her had bigger things in mind. I hope she was paid well for whatever didn’t work out.