Hear the words “’70s-set summer camp slasher,” and you’ll likely think of such horror mainstays as “Friday the 13th” (and its many, many sequels and remakes), “Sleepaway Camp,” or “The Burning,” classic entries in the sub-genre that Leigh Janiak’s second “Fear Street” movie ably fits alongside. As its title tells us, Janiak’s “Fear Street Part 2: 1978” is set in the waning days of the decade, as a pack of teens and kids (most of them ill-fated) enjoy a summer spent at Ohio’s own Camp Nightwing.

The film picks up after Janiak’s “Fear Street Part 1: 1994,” which introduces audiences to (some) of the strange history of the towns that supply Camp Nightwing’s seasonal residents, including down-market Shadyside and seemingly perfect Sunnyvale. When the two sets of townspeople come together to spend the summer, old fractures emerge and new bonds form, all of them tied up in the murderous backstory that drives Janiak’s ambitious trilogy. And while those other summer camp slashers certainly helped inspire the feature, which stars Sadie Sink and Emily Rudd as the Berman sisters (Ziggy and Cindy, respectively), as Janiak explained it, “1978” is really the product of her lifelong obsession with all kinds of horror films.

The films that influenced Janiak as a filmmaker, and thus the “Fear Street” trilogy as a whole, include some of the horror genre’s most beloved entries. Janiak was one of those kiddos who watched “Psycho” in fifth grade, partially due to an understanding about what exactly fell into the usual genre designations. “I remember I wanted to rent a slasher movie for a slumber party and my mom was like, ‘No, slashers are blah, blah, blah. Here, you can rent “Psycho,”‘ which is way worse,” Janiak said with a laugh during a recent interview with IndieWire. “Like, way worse and way more scarring to a child!”

She added, “‘Psycho’ was a big one. Then as I got a little older, it became ‘Invasion of the Body Snatchers,’ ‘Rosemary’s Baby,’ ‘The Shining.’ Those were my big ones. ‘Halloween’ is up there for me. ‘Halloween’ and ‘Scream’ are my favorite slashers of all time.” 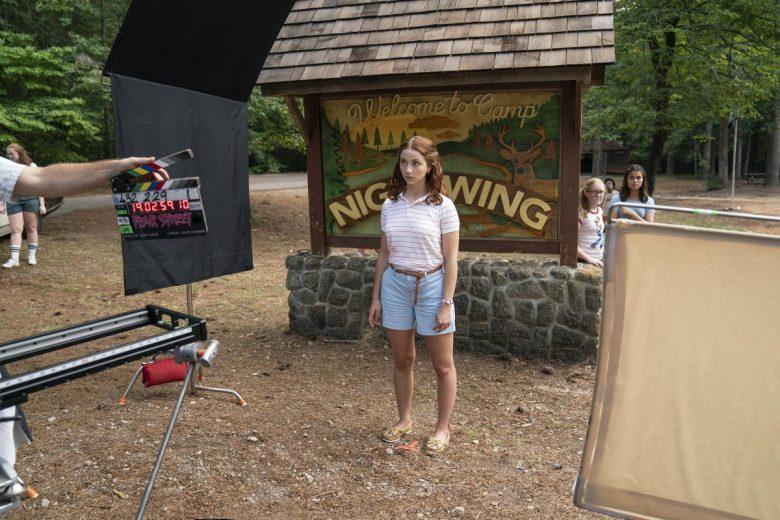 When it came time to crack the trilogy into its three parts, Janiak said the decision to offer two relatively contemporary settings — 1994 and 1978 — for the first two films, before zipping all the way back to the 17th century for “Fear Street Part 3: 1666,” came early in the writing process.

The idea to bring in another film set so close to 1994 was in service to her desire that the trilogy “could live in two different eras of the slasher [film],” her favorite sub-genre. For “1994,” Janiak turned to the tone of films like “Scream,” “I Know What You Did Last Summer,” and “The Faculty” in which, as she explained, “the characters are a little more self-aware, the whole vibe is a little more fun and light.”

Janiak’s love for “Scream” fuels most of “1994” — she even hired original “Scream” composer Marco Beltrami to score her trilogy — and that affection carries through the entire series, which is steeped in self-aware teenagers trying to break loose from the kind of terror you’d only find in a horror film. “‘Scream’ was my favorite as a teenager,” Janiak said. “I just think it’s one of the most brilliant movies ever made, which is very clear by how much I love it and try to pay homage to it in these movies.”

But for “1978,” Janiak knew she could tap into some more brutal genre DNA. “I wanted to still make it feel like a ’70s movie and kind of straddle that ‘Halloween’ and ‘Texas Chain Saw Massacre’ vibe, while still looking to great ’80s movies like ‘Friday the 13th.’ It was really about that, about being able to position in these two different types of slasher movies.”

The second film, which Janiak and company actually filmed last, allowed her to get almost gleefully gory. As she told IndieWire previously, “We shot the second movie last, and by the time I got to that movie, I was so tired. I was so tired,” she said. “Every time we had a scene with a kill or an attack, I was just like, ‘More blood, more blood, fucking let’s do this!’ There was no more negotiation, it was just like more, just do more.”

But fans of other summer camp slashers will see plenty of their influence in the film, beyond all the literal buckets of blood, which Janiak said also inspired her to make “1978” feel often quite different than the series’ other two entries. “Just across the board, stylistically, the camera work, of course, but also the way that the characters act in the movies are different,” she said. “You’re living in a much more stylized universe in the ’70s, the characters are more archetypical. That was fun to be able to be in a different world, fun and also challenging.”