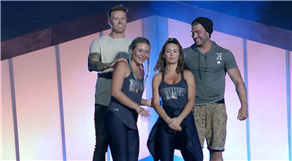 If there’s one rookie woman on The Challenge who can defy the odds and remain until the game’s end, it’s a blue-haired alien with expert missile marksmanship and a penchant for invoking the name of her late grandmother during victory speeches. But will Emy, the undisputed breakout star of Spies, Lies and Allies, rise to the occasion like the spacecraft she seems sure will beam her up?

On tonight’s episode, and stuck on a Ruby Cell that had left her totally uninspired, Emy — under the advisement of her favorite “Uncle CT” — hatched a plan to, once again, stand by CT’s side. Though CT was still the most feared man in the game, he saw Amanda and Bettina as his Sapphire Cell’s weak links and urged Emy to consider tossing herself into The Lair to take one of their spots.

“I think Emy intimidates some of the Vet girls for sure,” CT said. “She intimidates me. Have you seen her?!”

Nany, Kaycee and Tori certainly did, which is why Emerald Cell’s three veteran woman teamed up to keep Emy from victory in “Brush Contact,” a mix of bank heist and backyard football. To the surprise of none of the game’s remaining players, Team Green took home its third straight win, leaving Ruby and Sapphire Cells vulnerable to the looming women’s elimination. And after some shrewd moves by master politician Amanda, Emy and Bettina — the only two rookie women left in the game — essentially begged for a nomination into The Lair.

Because Emy was ultimately less of a risk to Emerald Cell, which wanted to keep itself completely intact (Emy insisted to Tori she wanted to join CT on Sapphire Cell), The Agency ultimately gave Emy the go-ahead, and — without batting an eye — Emy called out newly minted rival Bettina as her opponent.

“Bettina is a f*cking snake,” Emy said. “She thinks she’s the queen of puzzles? Stop it.”

Thankfully for Emy, there were no brain teasers on tap in The Lair, and “Bombs Away,” a glorified carnival game, challenged each woman to knock down five targets with a giant suspended mock-missile. In other words: It was perfect for Emy, a self-professed extraterrestrial.

“I will leave my soul on that spaceship or rocket or whatever it is,” she said. “I’m an alien, obviously. And I want to be the alien of the night.”

And the cosmos seemed to consequently line up for Emy’s earthbound mission. While Bettina struggled, Emy quickly found her rhythm and knocked down five targets before Bettina managed one. Then, after Emy joined CT on Sapphire Cell as promised, the veteran women wondered if they’d made a mistake giving Emy her wish of joining a powerful veteran ally on her preferred team.

“Emy is the elimination warrior,” Amanda said. “She is definitely Romanian military out there, and I would be terrified if she was shooting that missile at me.”

But is the blue-haired wonder strong enough to beat back a handful of remaining bloodthirsty veteran women? Or will standing on a rookie island just mean she’ll eventually be swallowed up by sharks? Share your thoughts, and catch an all-new Challenge episode Wednesday.