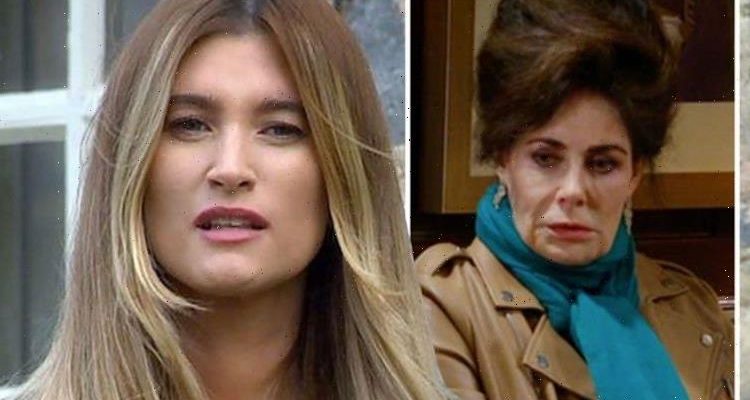 Debbie (played by Charley Webb) hasn’t been seen in the Emmerdale village since earlier this year when she returned after a prolonged absence as the mistress of love rat, Al Chapman (Michael Wildman). Unfortunately, due to her mother Charity Dingle’s (Emma Atkins) antics, Sarah’s (Katie Hill) mother left for Scotland and hasn’t been seen since. As the youngster suffered a panic attack during Thursday’s double-bill of the ITV soap, Faith (Sally Dexter) thought it was wise to tell her granddaughter what had happened. However, with Cain Dingle (Jeff Hordley) adamant his mother stay clear of his family, will he have already informed Debbie about how he thinks her great-grandmother is a bad influence, leading to her refusal to return for Sarah’s sake?

Faith and Debbie’s father Cain have had a rather strained relationship recently and this week’s news didn’t help matters.

When it was revealed the matriarch of the Dingle clan didn’t have cancer but indeed, arthritis, her son deemed her as a liar.

At the start of Thursday’s first episode, the mechanic was being rather cold towards his mother, not realising Sarah was struggling with anxiety.

The youngster was starting to feel guilty about the heart she had received from a previous transplant but her feelings hadn’t helped following the recent death of Leanna Cavanagh (Mimi Slinger).

This put a thought in Sarah’s head she could die any minute and should protect herself from harm but the irrational thoughts caused her to have a serious panic attack.

Luckily, Belle Dingle (Eden Taylor-Draper) was on hand to call an ambulance and get the youngster to hospital as Sarah thought she was dying.

Once at the hospital, the medical professionals informed the youngster she had been experiencing a panic attack and the nurse told her it was likely stress had brought it on.

Realising she wasn’t going to be going anywhere, Sarah told Cain and Faith: “Right, somebody ought to ring [Debbie] and tell her not to come.”

Sarah’s grandfather replied: “She will still want to see you,” to which Debbie’s daughter said: “There’s no point.”

“This isn’t nothing,” he remarked as Faith swooped in and told her great-granddaughter: “I’ll call [Debbie].”

Call Debbie and then get lost

“Fine, you call Debbie and then get lost,” Cain coldly told his mother, reminding her she “knew where the door” was.

Faith proceeded to leave the hospital room to ring her granddaughter and fill her in on what was going on.

In scenes that took place off-screen, Faith could have warned Debbie her daughter’s health is of concern again.

The matriarch of the Dingle clan could’ve played up the situation in the hope her granddaughter would return to the village and help ease the tensions with Cain.

However, the mechanic might have also messaged his daughter before she spoke with his mother to tell her Faith has been trouble since she made a comeback earlier this year and would be lying about Sarah.

Therefore when the matriarch spoke to Debbie, the mother-of-two could’ve point-blank refused to return to the village.

Further evidence to support Debbie’s continued absence from the soap came at the end of Thursday’s second episode.

Faith was seen having a drink in The Woolpack, only for her son to join her and the pair spoke about recent events.

“I can’t face another fight, son,” the matriarch of the Dingle clan remarked, with Cain replying: “Me neither.

“[Sarah] wound herself up about Leanna. Her heart going wrong, that was the route of it all,” he continued, with his mother saying: “I almost collapsed myself with worry.”

“I love that girl more than life,” Faith told her son and Cain said he knew she was telling the truth but he had his own warning.

“That’s why you’ll be keeping away from [Sarah]. She was hospitalised with stress,” the mechanic explained as he made it clear he wanted Faith to stay clear from his family.

“I don’t trust you and I never will. You stay away from me and my kids and my grandkids or you will be wishing that cancer came back after all.”

With Cain determined to keep his mother away from Sarah and Debbie, could he have manipulated his daughter to make sure she stays away from the village and Faith?

It has been reported recently the actress who plays Debbie, Charley, 33, has no plans to return to the soap in the near future.

An unnamed source explained to The Sun: “There are no current plans for Charley to return as Debbie at this time.

“However the door is always open for her. Debbie’s daughter and her family are in the village so it’s definitely not a permanent goodbye.”

The soap star’s husband and David Metcalfe star, Matthew Wolfenden, 41, further supported this during an interview on This Morning.

“To be honest, filming there at the moment with Covid regulations is tough. Everyone’s rallied round and made it what it is.

“But yeah, I think for [Charley] to go back now when all this is still happening is not what she wants to do.

“I think she’ll wait until all the restrictions have dropped,” the actor explained, meaning it is unlikely the Debbie actress will be back on the show any time soon.