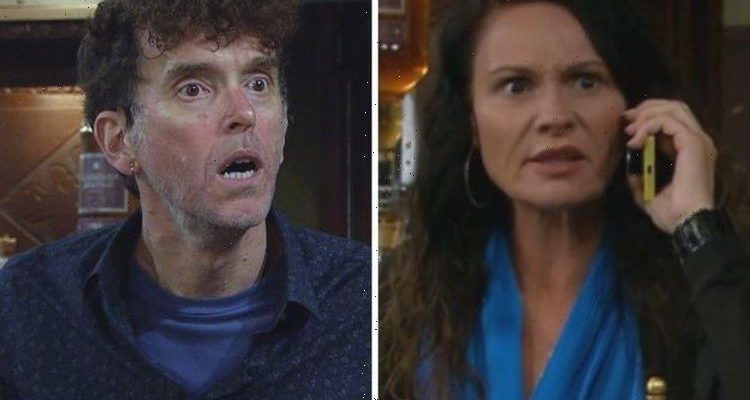 Marlon Dingle (played by Mark Charnock) jumped at the chance to become a co-owner of The Woolpack with Chas Dingle (Lucy Pargeter) earlier this year on the ITV soap. The chef ended up buying into the pub after Chas wanted to buy Charity Dingle’s (Emma Atkins) share and having worked at the business for several decades, she thought Marlon would be the perfect candidate. However, Marlon has quickly learned that he may not be cut out for running a pub. After getting a loan to buy Charity’s share, everything seemed to fall into place, but with business slowly dwindling, Marlon is struggling to keep up with the loan repayments. The cook is clearly desperate to get some money fast, and when he finds out that Victoria Sugden (Isabel Hodgins) has just inherited £50,000, what lengths will he go to, to get it?

Questions arose following Tuesday night’s instalment, starting when Bob Hope (Tony Audenshaw) confronted his girlfriend Wendy Posner (Susan Cookson) about her whereabouts after he discovered she had lied to him.

In the pub, Wendy finally came clean and admitted she had attended the funeral of her ex-mother-in-law instead of the course she told him she was at.

During their conversation, Wendy let slip that her ex-mother-in-law had left a substantial amount of money behind for Victoria – all while Marlon sat elsewhere in the pub.

“Was Luke (Max Parker) there?” Bob asked as Wendy replied: “No, they didn’t get on. I was hoping he would show but…still, it’s done, and I’ve paid my respects and done my duty.”

“Sit yourself down, I’ll get you a brandy,” Bob told her. “You look done in.”

“That’s not the end of it though,” Wendy admitted. “She was loaded.

“She’s left a bit to Luke, a few thousand as a piece offering but, the rest of it she’s left to Harry.”

“Wow,” Bob said in shock. “Good on Victoria. She deserves a bit of luck.

“So, why did you make all of that up about going on a course? I’m not going to stop you visiting your family.”

“No, it’s not that I just didn’t want to get you involved,” Wendy simply replied. “They’re a funny lot.”

Meanwhile, in the pub, Marlon confided in Paddy Kirk (Dominic Brunt) about his money worries.

Marlon was giving out free desserts in a bid to get some customers into the pub.

“Free dessert? Now you tell me,” Paddy asked as Marlon hit back: “Have you paid for that?”

“No, but if I knew there was a free dessert going,” Paddy replied.

Marlon added: “It’s no wonder we are going bankrupt then, is it?”

Chas, who was on the phone at the time, quickly chipped in: “Don’t talk rubbish.”

Paddy whispered: “I know business isn’t exactly booming, but I wouldn’t joke about that if I were you.”

Marlon appeared to get emotional as he admitted: “It’s not just that, it’s everything.

“I thought it’s what I wanted,” Marlon explained. “To me my own boss. Scary though, when there is no one else to blame when it all goes wrong.

“It’s alright for you and Chas, you’ve got your salary propping you up, but I live and die with how many pints we pull.”

Paddy went on to point out how many lodgers Marlon had, although the chef told him it barely covers his mortgage.

“I’m more skint than I’ve ever been, ever,” Marlon confessed.

“What about Chas?” Paddy asked. “If you’re struggling, she needs to know.”

Marlon appeared to backtrack and told Paddy he was exaggerating, “No, let’s not go involving Chas,” he insisted.

Despite Paddy offering to bail his pal out, Marlon refused and instead, he phoned the bank to see if he could increase his credit card limit.

As the episode came to a close, Wendy was back in the pub and revealed to Victoria about the £50,000.

“I have a bit of news that could change things,” Wendy told her. “Luke’s grandmother she has died and she’s left Harry some money.

“Is this a joke?” Victoria asked in shock. “That has to be a mistake.”

Marlon was nowhere to be seen, but with so many discussions about money taking in the pub he owns, it’s not unlikely he may have been listening.

With Victoria about to become a lot wealthier, will the chef risk everything by stealing from her?

However, if Chas finds out, they both could end up losing The Woolpack for good if the police investigate the theft.