In recent weeks, Emmerdale barmaid Chas Dingle (played by Lucy Pargeter) has found herself in the arms of former flame Al Chapman (Michael Wildman) as she tries to come to terms with her mum Faith’s (Sally Dexter) cancer diagnosis. Despite the pair coming to a no-strings-attached agreement, ITV fans seem to think their affair will be exposed if Chas falls pregnant.

Earlier this year, bosses teased that there would be a pregnancy in the village to mark the soap’s 50th anniversary.

Although, following the passionate scenes that aired this week between Al and Chas, fans think the barmaid could end up getting pregnant with Al’s baby.

Many have taken to social media to share their thoughts, with one fan predicting: “Yes I wondered if it’s Chas or maybe it’s too obvious.”

Another replied: “I think it could be Chas as she’s been having an affair with Al.” 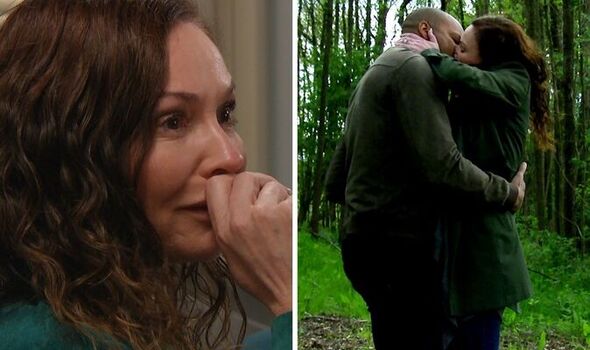 “I know Emmerdale has said there will be a surprise pregnancy this year. My first thought was Lydia and Sam, but what if it is Chas?” another fan added.

While one replied: “Gonna be Chas and Al will be the Dad.”

Fans on Twitter have also shared their thoughts on theories, with Tam tweeting: “Chas pregnant, who’s the daddy?”

While Ryan added: “Imagine if Chas got pregnant with Al’s baby?”

“I think Bear knows about Chas and Al. I’m guessing it was Al on the phone,” Mike theorised.

Shaky penned: “I guess it won’t be long now until Chas’ affair with Al will be revealed.”

Ryan went on to predict that Al and Chas’ affair will soon be exposed, he added: “Al and Chas agreeing to meet in secret. That is going to backfire.” (sic)

Despite coming up with their own theories about Al and Chas’ storyline, during Thursday night’s episode, viewers watched as the barmaid told Al it was over.

“Don’t call me again,” Chas insisted. “No texts, no voicemails, no nothing. Do you understand?”

As Al tried to change the subject, the barmaid asked: “Al, what exactly do you want from me?”

“You got my messages, right?” he said before Chas said: “The ones you sent when you were lying next to Kerry?”

The actor who plays Al has recently spoken about whether his character would ever come clean about having feelings for Chas.

“There’s got to be a time when he will come clean with someone he’s cheated on.

“At this moment in time, he gets to a point where he’s not getting something that he’s looking for in the current relationship that he’s in, and that’s where he always goes wrong.

“At this moment in time that’s where Chas comes along and offers him the kind of comfort and support he’s not getting somewhere else.”

“That’s his biggest downfall,” he added.