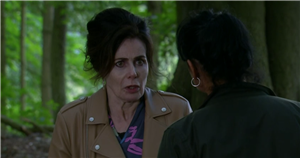 Share your email to get soaps interviews, spoilers from the Star

Emmerdale viewers were consumed with emotion during Friday night's episode after Faith Dingle appeared to ask daughter-in-law Moira to assist her with her death.

The matriarch of the Dingle family is currently battling terminal breast cancer and her health seems to be deteriorating rapidly.

During the latest episode, Moira and Faith went for a walk and Faith revealed that she may want Moira to help end her life.

READ NEXT: Emmerdale's 'best loved characters in peril' as devastating storm to rip through village

As things became tense with the pair, a devastated Moira said she could never keep Faith's secret request to herself.

With emotions starting to rise, viewers couldn't help but comment on the heart-wrenching scenes.

Taking to Twitter one viewer wrote: "The scenes between Moira & Faith are so incredibly moving tonight, has to be an award winner, sad that Sally Dexter is leaving, but what a performance."

Another shared: "Wow Moira and Faith. Sally and Natalie are just brilliant together…they bring so much emotion to their scenes…poor Faith but such a weight for Moira to have to bear."

A third echoed: "I am gonna be gutted when Faith dies, she’s my fave character."

Meanwhile a fourth added: "Faith and Moira scenes," followed by a love heart.

Faith, played by actress Sally Dexter has been an integral part of the soap since she joined in 2017.

It is believed Faith's final scenes will air in October during Emmerdale's special episode to celebrate the soap's 50th birthday.

Talking about her departure, actor Jeff Hordley, who plays Faith's son Cain Dingle, previously said: "I'm personally saddened at losing the brilliant Sally Dexter, but it will give us some great stories going forward, so I look forward to that. And that's as much as I know."

Meanwhile, discussing what's to come with the Metro, ITV boss Kate Brooks said: "The big 50th week will focus on a massive storm that is going to rip through the village and leave an absolutely massive trail of destruction in its wake.

"Some of our best-loved villagers will be in peril and it’s safe to say that literally the village won’t be the same after this. It’ll never be the same again because the impact the storm has on people’s lives is massive."