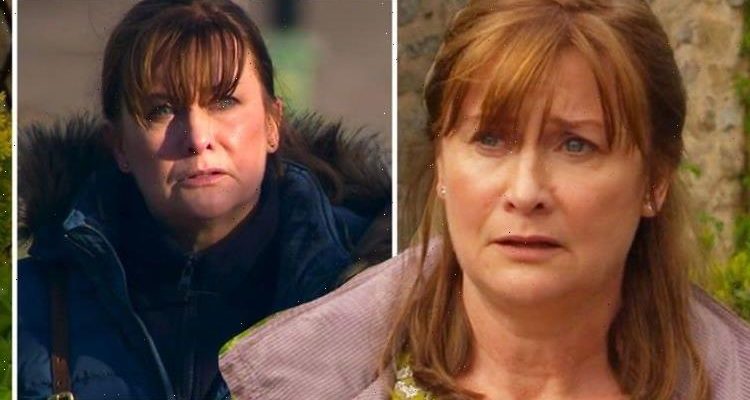 Wendy (played by Susan Cookson) has had quite a dramatic time in the Emmerdale village since arriving two years ago as the mother of the rapist, Lee Posner (Kris Mochrie), and his brother Luke Posner (Max Parker). Whether it be her crazed ex-husband holding her at gunpoint or her sons causing her pain and misery, the one person who has managed to support the midwife through everything has been her partner, Bob Hope (Tony Audenshaw). However, next week’s episodes hint their romance might not last too much longer and as a result, Wendy could be leaving the ITV soap.

The mother of two has been taking a backseat from the drama for the past couple of weeks, with Andrea Tate (Anna Nightingale) being killed taking focus.

She has been a background character, looking after young Millie Tate (Willow Bell) in the aftermath of her mother’s death.

Kim Tate (Claire King) hasn’t been too happy with the plan but she knows her grievances with her former daughter in law before her death meant the guardianship being taken away.

Putting others before herself has been a key trait of Wendy’s since she arrived in the village and she has always tried to take the position she believes is right in an argument.

However, when it seems her plans for the future with Bob aren’t going as plain sails as she had hoped, she might be thinking about putting herself first.

Next week, Wendy and Bob will start living together after he suggested she move in with him instead of them having separate houses.

Unfortunately, within days, the father of seven will begin to doubt whether he has made the right decision by living with his partner.

Worried he’s ruined things, the beloved character could unintentionally be putting a bridge between himself and his lover.

Feeling rejected and not wanting to be reminded of her past in the village, the midwife could also think her time in the village has come to an end.

Not wanting to face up to the fact she would have to split from Bob, she could leave with no explanation at all, leaving her other half devastated.

With no connections to the village, other than her grandson Harry, there will be no reason for Wendy to stay in the village.

Lee was killed after it was revealed he had got Victoria Sugden (Isabel Hodgins) pregnant after raping her and it was thought Robert Sugden (Ryan Hawley) had dealt the fatal blow.

A couple of months ago, Wendy discovered her other son Luke had a part to play in his brother’s demise as he had punched him a few hours before his death.

As his mother was unwilling to let him get away with murder, the young chef fled the village and hasn’t been heard of since.

This paved the way for his father, Russ Posner (Rob Jarvis), who wanted to get his hands on some money Harry had inherited from his late mother.

A gun siege and several shots later, Wendy emerged from her family drama relatively unscathed but she would want to leave this all behind her.

Knowing Victoria doesn’t need her help anymore as she builds a family with David Metcalfe (Matthew Wolfenden), the mother of two might be happy to have the occasional visit wherever she ends up next.

This would leave an empty hole in the centre of the village as many villagers relied on Wendy for her medical knowledge and maternal instincts.

But with killer Meena Jutla (Paige Sandhu) still lurking around, she might make the right decision to leave the village.

The actress who plays the midwife, Susan, recently hinted she would be willing to make a move away to another soap.

In an interview with ITV’s Lorraine, the soap star was asked if she would star in EastEnders, to which she replied: “I would happily do that.

This was several months ago now, so could writers be gearing up to write the character out so the actress can star in other roles?

Wendy’s exit from the village would be permanent as, again, there is nothing left for her to come back to if Harry visits her.

Some fans have already theorised the character could be making a departure and have shared their thoughts on social media.

Paul wrote on Twitter: “Why are the writer’s hell-bent on shoving Wendy down our throats, they have destroyed the character nothing can redeem her #Emmerdale.”

Sophie added: “Wendy, why are you even still here? #Emmerdale,” with Michelle commenting: “Wendy gets on my last nerve #emmerdale.”

“Wendy needs to do one #Emmerdale,” ABLM remarked but not everyone is so against Wendy as others would like to see her stay.

Following the revelation she wasn’t a qualified nurse a few weeks ago, William shared: “Wendy will be fine. They’ll get her a job in the café and she works things out #Emmerdale.”

But will working things out see her leave the show?

Emmerdale airs weekdays at 7pm on ITV, with an extra episode airing on Thursdays at 8pm.