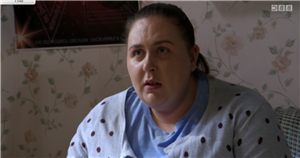 EastEnders star Clair Norris has teased potential drama for her character Bernie Taylor's surrogacy storyline on the BBC One soap.

Monday's episode saw Bernie discover that she is pregnant after agreeing to be a surrogate for Rainie and Stuart Highway (Tanya Franks and Ricky Champ) in exchange for money.

Talking about the storyline in a new interview, Clair, 23, admitted that there is a "lot going on at once" for her character and that it is "all a drama".

The soap star told Mirror: "That's obviously a big factor of having a miscarriage and getting attached to the baby.

"It is always gonna be a worry for the Taylors and Rainie and Stuart, as well as Bernie. I think Bernie's mind is so focused on carrying the baby and not having a miscarriage and handing the baby over, because she knows as soon as the baby is handed over she gets that final instalment.

"That's all the money for her family, so she is kind of thinking along those lines but there is that worry of a young girl carrying a baby for nine months, having lost a baby, there is that side of it. Is she gonna give it over or is she gonna go the opposite way? Will she even want to deal with the baby and will she say, 'there you go', there's that side as well."

Clair teased that there is a "lot going on" with Bernie and that a lot of storylines have been "interlinked with the surrogacy".

On Monday's episode, it saw Bernie encouraged to take a pregnancy test by her best friend Tiffany Butcher (Maisie Smith) where Rainie overheard them and decided to be present for the results.

However, in true soap style, Keegan Baker (Zack Morris) saw Tiffany buying the pregnancy test and got the wrong end of the stick, believing it was for her.

This resulted in Bernie having to tell her shocked brother the truth and he immediately told their mother Karen Taylor (Lorraine Stanley) who rushed to confront Rainie during Bernie's pregnancy test.

Karen protectively yelled: "What have you done to my daughter" as she threatened to take her outside, adding: "You can't do this!"

During the confrontation, Bernie held her pregnancy test as she started shaking her head, which led viewers to believe she wasn't pregnant, but she then added: "Two lines… I'm having their baby."

Bernie appeared stunned by the news while Rainie, Karen and Keegan were left equally shocked over the result.

EastEnders continues on BBC One on Thursday at 7:35pm.

For all your updates on EastEnders, sign up to our daily OK! newsletter.