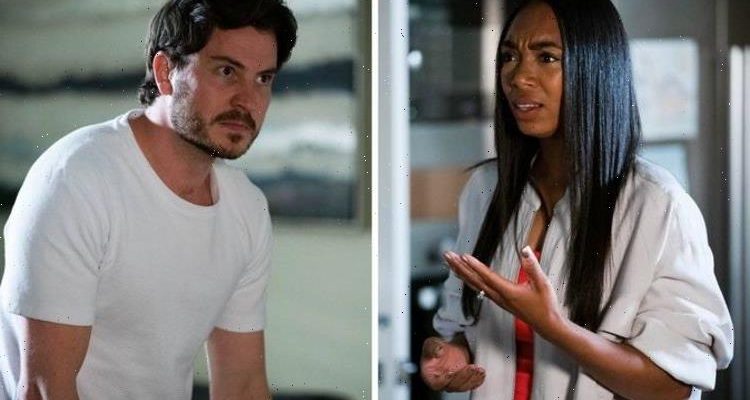 EastEnders Gray Atkins (played by Toby-Alexander Smith) has gotten away with quite a lot since his arrival onto the square, manipulating everyone who lives in Walford. He has gotten away with the murders of ex-wife Chantelle Atkins (Jessica Plummer), Tina Carter (Luisa Bradshaw-White) and Kush Kazemi (Davood Ghadami) on the BBC soap. However, could his powerful reign over the residents of Walford finally be stopped as his boss grows suspicious, or will she be Gray’s next victim?

In recent weeks, viewers will know that Gray’s boss Laura Awoyinka (Sarah Paul) intentionally got him drunk so he would embarrass himself at a works drink by offering him a free bar.

Laura then secretly spoke to his current girlfriend Chelsea Fox (Zaraah Abrahams) at Gray’s home, warning her that the lawyer abused his previous wife, Chantelle.

After constantly being sceptical of Gray and his behaviour, Laura tried to explain to Chelsea that he was probably looking for his next victim.

Chelsea refused to listen to Laura and could be set to fall at the hands of her manipulator boyfriend, adding another name to his list.

This week’s episodes have seen Chelsea be put in an awkward position when she ran into James, with who she had a one-night stand whilst out with Gray.

She later decided to buy a ring from a pawnbroker, only to be stunned as Gray exploded with anger once he realised it belonged to his late wife, Chantelle.

In upcoming scenes, Gray, who received a caution from work, is worried about money, and his problems multiply when Laura arrives on his doorstep with an HR rep in tow to deliver some shocking news.

After receiving a caution last month, Laura tells Gray that he has been fired, and he reels in the wake of the revelation.

Feeling angry about the news he is given, Gray tracks down Chelsea to confront her about why there are such significant charges on his credit card bill.

Chelsea, however, shows no interest in his debt and claims it is not her problem which angers him even further.

The news around the loss of his job, coupled with Chelsea’s disinterest, leaves Gray livid with fury and storms to the Queen Vic to speak with Shirley.

Could this finally be the start of Gray’s downfall as Laura grows even more suspicious and he begins to spiral out of control?

Or will Gray strike again and take Laura down before his fearful actions are exposed?

Viewers will remember that Gray murdered Tina last December after she found out he abused and murdered Chantelle.

Gray claims to Shirley that he has seen Tina on a bus leaving her in shock, but she wastes little time relaying this new information to Mick Carter (Danny Dyer).

The pair both confront Gray on what he has seen, but he states he cannot be 100 per cent certain it was Tina he saw, gaining his power back.

Shirley then goes on a warpath, and her attention gets sidelined by Sharon Watts (Letitia Dean) and Phil Mitchell (Steve McFadden), as she plans to tell Mick that the duo is going down unless they confess about their attempted murder on Ian Beale (Adam Woodyatt).

Meanwhile, Phil returns to the square and is bombarded by a guilt-ridden Sharon and a furious Shirley, ordering him to turn himself in.

Viewers have speculated for some time about when Gray will finally be caught, with a user explaining on Reddit: “I really hope Laura works out what happened to all Gray’s victims and saves Chelsea in time! I’d hate for her to be yet another one to be killed by him!”

Another added their frustration regarding Gray’s actions: “I wish Gray would just be stopped now, this serial killer storyline is getting boring now, can’t keep killing people and not being caught!”

“Gray Atkins needs to be stopped!!! We can’t let another character fall at his hands again!”

EastEnders continues tonight at 7:40pm on BBC One.