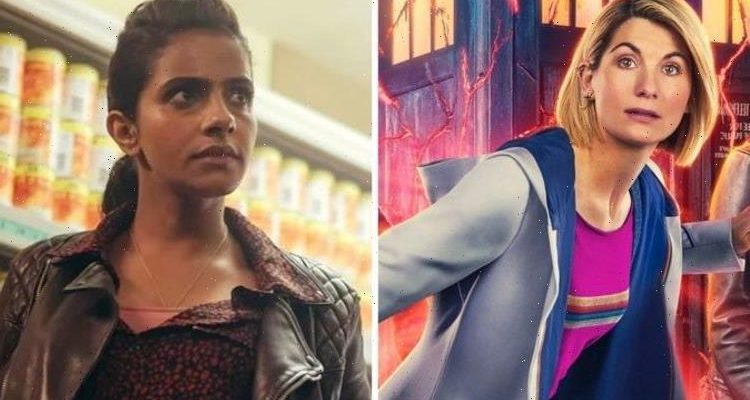 Doctor Who: Aisling Bea stars in Eve of the Daleks trailer

The time-travelling hero is returning for the first of three final episodes to cap off Jodie Whittaker’s tenure in the TARDIS this Saturday on BBC One. After the ambitious yet divisive event series Flux, can Doctor Who’s New Year’s extravaganza, Eve of the Daleks, get the Time Lord’s adventures back on track?

Yasmin Khan herself, Mandip Gill, chatted with Nicki Chapman about the upcoming episode of Doctor Who on BBC Radio 2’s Friday morning show.

Filling in for Zoe Ball, Nicki probed the Doctor Who regular on the mind-boggling premise for the Doctor and Yaz’ latest caper.

She explained: “It’s a story that takes place on modern-day Earth, so they have veered off course slightly on their travels.

“And the gang find themselves in a storage unit in a time loop.”

Yaz is joined by returning companion Dan Lewis (played by John Bishop), plus guest stars Aisling Bea and Adjani Salmon will also be along for the ride.

Unfortunately, their temporal trap isn’t the only problem on their radar, and they soon encounter the Doctor’s most enduring enemies.

“It’s still got lots of adventure but then there’s a huge dose of Daleks and they have got their sight on the Doctor,” Mandip teased.

“After the series that we have just done, there’s definitely going to be a big showdown.”

Helmed by director Annetta Laufer, Mandip admitted her direction was vital in getting the cast’s heads straight on the episode’s complicated story.

She recalled: “You know what, it’s actually quite confusing but the director was so good, she’s so on it.

“So we would do a time loop and then she’d explain at what point of the story we were at.”

Despite studying showrunner Chris Chibnall’s script several times over, it still took some time for Mandip to get a proper grasp on the time loop conundrum.

“It doesn’t matter how many times you read it on paper, it’s genuinely confusing when you are doing it,” she admitted.

As most of the action took place in the same small location, it became difficult to place where each scene fit within the overall narrative.

Mandip explained: “We stayed on the same set for three weeks.

“Usually we change sets, so even as an actor it’s like we’ve been in this storage unit for three weeks.”

“With the same outfit on, just five actors. It honestly feels like you are going through a time loop as you are filming it.”

Thankfully, director Annetta and showrunner Chris were on hand to get filming back on track if things got a little too confusing.

“You need a few reminders on certain things,” she added. “Like, ‘this is this version, this is where we are at’.”

Hopefully, viewers still nursing their New Year’s hangovers on Saturday evening will still be able to follow along when Jodie returns for one of her last outings as the 13th Doctor.

Doctor Who: Eve of the Daleks airs New Year’s Day at 7pm on BBC One.