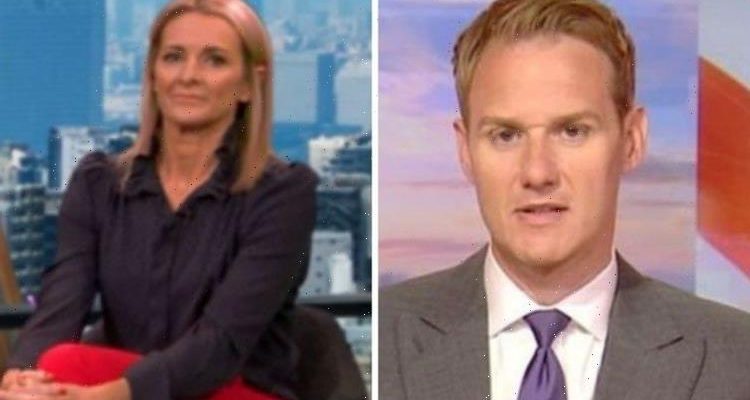 On day two of Olympic Breakfast, BBC viewers were expecting to see Dan Walker and Sam Quek back co-hosting the latest coverage from the Tokyo Olympics 2020. The special programme aired on Saturday and Sunday between 6am and 9am, in replacement of BBC Breakfast. According to the TV schedule, Dan was meant to be back presenting alongside Sam, however, the BBC host was replaced by Gabby Logan.

According to the TV schedule Dan and Sam was meant to be back on Sunday’s show to “present further coverage of day two from Tokyo”.

“Elsewhere, America’s Simone Biles is the star attraction in the gymnastics team and individual apparatus qualifying at Ariake Gymnastics Centre.

“And medals are decided from 8.40am in the women’s archery team final at Yumenoshima Park Archery Field.”

As Sam and Logan introduced Sunday’s Olympic Breakfast, they didn’t address why Dan was absent from the show.

“Hello and welcome to Olympic Breakfast with Sam Quek and me, Gabby Logan,” Gabby began as she introduced the show.

“The women’s road race is underway and it’s live on the red button and BBC iPlayer.

“We will have regular updates on BBC One as well.”

Discussing what was coming up on the programme, Sam continued: “And we’ve got plenty of top-class sport on the way too. But welcome to Olympic Breakfast.”

Speaking about how the Olympics were going so far, Gabby said: “Welcome to day two of the Tokyo Olympics.

“We’ll be honest, it’s not started so well apart from Bradley there for Great Britain.

“Big disappointment for Jade Jones who was the favourite to win gold. She was the 2012 and 2016 Gold medallist.”

“She was determined she could back that up with victory in Tokyo,” Gabby added.

“But she was beaten a couple of hours ago in her last 16 belt.”

Sam chipped in: “We were hoping to show you Andy Murray in action. Of course, another British gold medal winner.

“He was due to play in the first round of the tennis singles this morning but unfortunately he has withdrawn due to thigh strain.

“We are told he will continue in the doubles though.”

Following’s Saturday’s Olympic Breakfast, Dan took to social media to address the backlash from viewers who were unhappy with the lack of live sport coverage.

Some were hoping to see more of the men’s gymnastics opposed to the men’s bike racing.

“Thanks for watching this morning,” he began. “I know we’ve got used to being able to see every sport – on various streams – at the #Olympics but, this time, the BBC is only allowed to show 2 sports at the same time.

“It is an issue about TV rights & not an editorial choice.” (sic)

Express.co.uk ahs reached out to the BBC for comment.