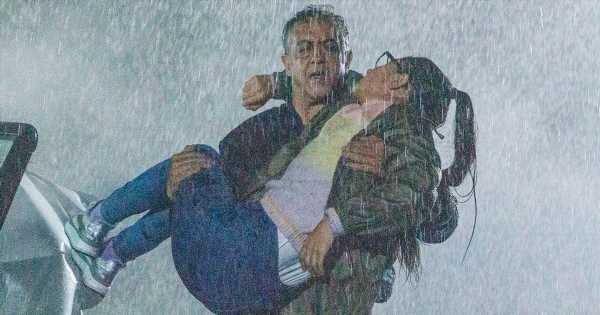 Executive producer Iain MacLeod claims the extravaganza due to air later this month will look “cinematic” and even have scary shades of Cape Fear, Terminator and Seven.

Dubbed “Horror Nation Street”, fans will be treated to some shocking and terrifying scenes as a violent storm lashes Weatherfield in the middle of Hallowe’en celebrations and during all the drama, one familiar Corrie face will die.

The action kicks off when the sinkhole in The Platts garden caves in and causes havoc around Weatherfield.

Abi (Sally Carmen) has got a gun and wants justice but the ground suddenly opens up and traps them both in an underground sewer.

MacLeod reveals: “In this Nina-Seb hate crime story there was always a chapter where the people most affected by what Corey had done would have a huge opportunity to exact revenge and then a huge battle with their own conscience about the right way to proceed.

“Corey is one of the most disliked characters in our show at the moment. Him and Abi… their scenes are emotional and tense and they look fantastic and I think they wouldn’t look out of place in a movie.”

There are bigger shocks in store for poor Leanne Battersby when jailed evil drug lord Harvey Gaskell escapes from a prison van taking him to hospital.

He arrives in rain-hammered Weatherfield in the middle of a masked Hallowe’en party and hunts her down.

He explained: “It just felt like – let’s do something really filmic with him where he is at large and nobody knows what he is capable of and then insert him into this incredibly dramatic backdrop that we have created.

“The end result is fairly chilling. It is a brilliant kind of Hollywood thriller storyline.”

There will be shocks and tears when the car being driven by Dev Alahan (Jimi Harkishin) crashes into Harvey’s prison van in the storm.

His motor turns into a fireball with his twins Aadi and Asha inside and he must decide which child to drag from the burning wreck before it explodes, however, Dev chooses his “favourite” Asha.

MacLeod warned: “This is going to be really resonant for a lot of people across the country.”

But there will be some typical Corrie comedy among all the gloom.

Jenny Connor (Sally Ann Matthews), who is having fun with toyboy Leo, goes looking for her ex-hubby Johnny (Richard Hawley) in the storms after hearing he plans to move abroad.

Both end up swept away down the sinkhole.

He says: “This was the heart and soul of the piece. You have the Cape Fear and Terminator thing over here and a dose of Brad Pitt film Seven over here and then as always with Corrie what you always want is something to warm your cockles a touch and give you that dose of old fashioned Corrie humour.”

Bosses are keeping the identity of the character who dies a secret so as not to spoil it for viewers.

MacLeod said: “What you can expect is something truly massive where money was no object.

“These big ambitious set pieces are a huge part of what we all do and this was an opportunity for us to stretch our muscles again and go ‘Look guys we can still do this.’

“The moment we thought the Covid situation would allow us to do this we wanted to dust off this playbook and give the audience something really spectacular.”