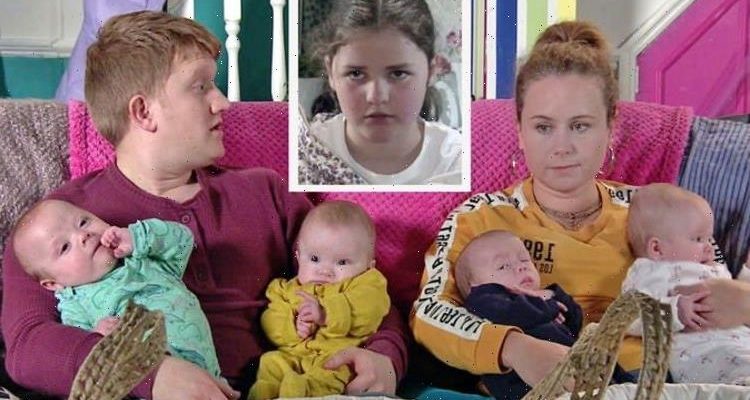 Tyrone Dobbs (played by Alan Halsall) and Fiz Stape’s (Jennie McAlpine) split was never going to be plain sailing, but in a turn of events, Hope Stape has started meddling in a bid to get them back together and her evil streak as resurfaced once more. Coronation Street fans are certain it was the young girl who started the fire in Alina Pop’s (Ruzandra Porojnicu) flat, but in a bid to save Hope from the authorities, Fiz has taken the downfall and next week, she will be seen spending a night in a police cell determined to protect her daughter. According to the latest soap spoilers, the wider family will distance themselves from Hope and Fiz, wary of how dangerous the child can be. Does this mean Hope has got a new target in her sights?

In upcoming scenes, Fiz sticks to her story that she started the fire, while Evelyn Plummer (Maureen Lipman) urges her grandson to make her see sense, pointing out Hope needs professional help.

Alina, on the other hand, is unhappy about the cover-up, arguing Hope could cause someone serious harm if she is allowed to continue roaming the streets, and it will all be Tyrone’s fault.

Feeling stuck between a rock and a hard place, Tyrone decides to tell the police the truth; Hope started the fire.

Unaware of her ex-partner’s testimonial, Fiz demands to know why she hasn’t been charged and the police officer tells her new information has come to light.

And when they inform Fiz they know it was her daughter who caused the arson, she tries to deny it but quickly cracks and begs them not to punish her little girl.

Those watching at home will see Fiz released with a caution and as she leaves the police station, Tyrone is waiting for her.

Instead of being grateful that Tyrone is there to take her home, Fiz is furious for throwing Hope to the wolves and orders him to stay away from them.

Back home, it is Evelyn who is the peacekeeper, reminding the adults to put on a united front and suggests they sit Hope down and tell her the police will want to talk to her about the fire.

And it isn’t long before they’re back at the station with Hope for questioning.

It is Evelyn who acts as Hope’s appropriate adult and DS Abney gently questions her about the difference between right and wrong.

Hope explains how she used the nail polish remover and the candle to set light to the cot but she never meant to harm anyone.

As for the consequences, Hope’s solicitor reveals she will be charged after admitting to starting the fire and Fiz and Tyrone are worried when they find out she could face a trial.

Back in Weatherfield, word has got around and in The Rovers Return, Alina is upset to hear Jenny Connor (Sally Ann Matthews), Sally Metcalfe (Sally Dynevor) and Tim Metcalfe (Joe Duttine) full of sympathy for Fiz and Tyrone over the Hope situation.

Annoyed and feeling sorry for herself, Alina orders a double gin and tonic and spends the evening drinking alone.

As tipsy Alina emerges from the Rovers, she’s hurt to see Fiz and Tyrone heading to No.9 laden with dinner for the family.

But before she enters through the front door, Fiz spots Alina and suggests Tyrone takes her home.

And when the mechanic approaches Alina, she tells him how forgotten she feels and Tyrone regrets how things have worked out.

He explains how he imagined they would get married and raise a family together but Alina doesn’t hear what Tyrone said properly, instead, she agrees to try and again and get married and Tyrone realises he’s accidentally proposed.

Soon, Hope’s sentencing comes around and Tyrone is forced to tell Fiz about being engaged to Alina.

And it is Evelyn who pours scorn on Tyrone for getting engaged by accident and Fix is left feeling like a fool for believing it was over between them and he was putting his family first.

When Fiz pops around to her brother’s, he has some harsh words for her; Chesney informs Fiz he and Gemma have agreed that Hope can’t visit No.5 until they know she is no longer a danger.

Fiz is crushed to realise Chesney views Hope as a danger to his children.

Calling at No.9, Tyrone emotionally blames himself for wrecking everyone’s lives then bursts into tears and Fiz is taken aback by his unhappiness.

However, it isn’t long before the pair are opening a bottle of prosecco and celebrating some good news – has Hope evaded any consequences for starting the fire?

If this is the case, and with Chesney mentioning his four babies being in danger of Hope, could the evil child have set her eye on a new target?

After all, the reason why Hope went after Alina was because of how unhappy Fiz was about Tyrone moving on and having a baby with another woman.

Should Hope see how hurt Fiz is because Chesney has distanced himself, will Hope put her four baby cousins in danger?

This wouldn’t be the first time she has created a hazardous situation, Coronation Street fans will remember how she tried to convince Chesney’s eldest son, Joseph to jump down the stairs.

Alan Halsall, who plays Tyrone has spoken out about this storyline arc and what his character’s biggest fear is in relation to Hope – surprisingly it’s not her endangering someone else next.

“Tyrone’s biggest fear about Hope is that she may be taken away from the family,” the actor said. “He doesn’t really think that she needs to go to prison.

“It is the unknown that is scaring Tyrone, he keeps thinking, ‘what are they going to do when they find out that she is like this?’

“Then they break the news to Hope that she may face trial and she doesn’t really care about it, which is even more distressing to Tyrone and Fiz.”

As for how he could feel if Hope went to trial, Alan continued: “Tyrone would be devastated, the last thing he wants is his little girl in a courtroom.

“But he also knows that Hope has got problems and Tyrone has just lost a child to this tragic accident so he feels that Hope should admit to some of it or take that onboard.

“However the last thing that he would want would be his little girl to go on trial.”

Having told Fiz about how unhappy he is despite being engaged to Alina – is there a chance he wants to get back with Fiz?

When asked who he thinks is a better match for Tyrone, or whether he needs to focus on himself, Alan said: “Tyrone has got a lot of soul searching to do because right now, he is clearly very conflicted again.

“If that is Fiz again in the future then he needs to work that out before he allows someone else to work things out for him. He needs to start doing things for himself.”

Coronation Street airs Monday, Wednesday and Friday at 7.30pm and 8.30pm on ITV.