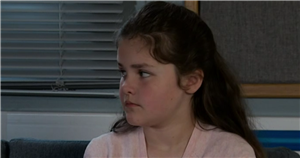 Hope Stape was the main subject of conversation for Coronation Street fans on Wednesday, after she was interviewed by police regarding her involvement in the recent arson attack.

The 10-year-old who recently set fire to her father's flat gave viewers "chills" when she discussed the previous events that took place with police.

When Hope was questioned by the officers she appeared to suggest that Alina Pope- who was in the apartment when the fire took place, didn't need a cot for her new baby. Therefore it didn't matter if the cot was in flames.

The young child also portrayed a nonchalant attitude throughout her questioning. Fans online couldn't help but share their views on the youngster as they branded her motives as "evil".

One viewer penned: "Hope gave me chills then what a horrible little girl."

"Hope is evil, and she is about to get her comeuppances," another said.

While a third commented: "Hope is such a evil kid. She needs to confess to the police."

But later on in the programme, to viewers' surprise, Hope did confess to her crimes.

She also revealed that she was unaware that Alina was in her father Tyrone Dobb's flat.

After their conversation with Hope, the police informed her parents Tyrone and Fizz Brown what the next steps would be and informed them that Hope will face the consequences and will be charged.

But Fizz and Tyrone appeared to be in disbelief and reminded the officers that their daughter is only 10-years-old.

Seeing Fizz and Tyrone's woeful reaction upset viewers and they took to Twitter once again to express their thoughts.

One fan chimed: "I've always known fizz was thick but f**k me she's taking liberties over this."

A second viewer also agreed that Fizz was not accepting that her daughter could hurt people and said: "Fizz's level of delusions about how damaged Hope is, is ridiculous. Hope isn't innocent and has purposely hurt people before."

A third Corrie fan penned: "Absolutely baffled by Fizz asking why her daughter who set a house on fire is to be charged. Hahaha wtf did you think would happen."

This is a live TV story and is constantly being updated.

Please refresh the page regularly to get the latest TV updates.

TV & Showbiz reporters are working to source the latest information, reaction, pictures and video related to this story.

Or like our Daily Star Showbiz Facebook page to get the day's biggest stories, and have your say on them.

Why not also subscribe to receive our regular Daily Star showbiz newsletters?

You can do this on this page by simply entering your email address above and hitting 'subscribe'.

Download the Daily Star app for flash alerts on the biggest stories of the day, so you don't miss out.

Why not also subscribe to receive our regular Daily Star news bulletins? You can do this on this page by simply entering your email address above and hitting 'subscribe'