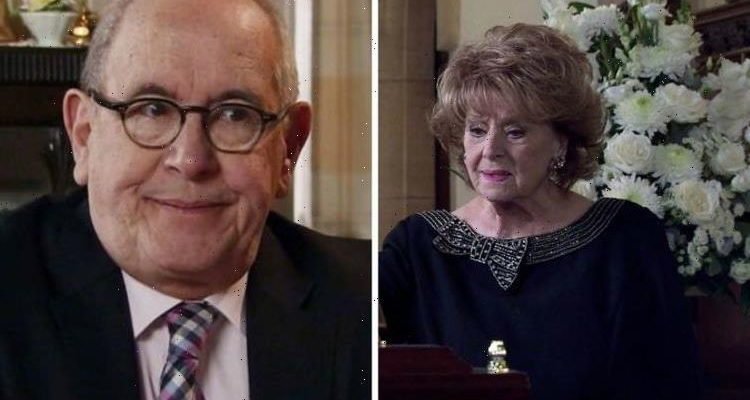 Coronation Street: Colin reveals Norris Cole might be his dad

Norris Cole’s (played by Malcolm Hebden) death left Weatherfield residents heartbroken after being a firm fixture of the ITV soap for nearly 30 years. In upcoming Coronation Street scenes during his funeral, vicar Billy Mayhew (Daniel Brocklebank) reads a letter left by Norris teasing he left a final secret in the paperboy statue outside the Kabin. Could the letter reveal Norris has a secret child?

As mourners gather in church for Norris’ funeral, Audrey Roberts (Sue Nicholls) passes around a hip flask full of tequila.

Mary Taylor (Patti Clare), who had been one of Norris’s closest friends, takes a huge swig of the alcohol, with Gail Rodwell (Helen Worth) watching on in concern.

Rita Tanner (Barbara Knox) gets up to deliver a touching eulogy about her best friend, before the vicar Billy Mayhew reads a final letter left by Norris.

Freda and Mary are both touched by Norris’s heartwarming words, but the letter soon takes a shocking twist.

Norris took the opportunity to share a secret which he never told his loved ones when he was still alive.

Within the cryptic letter, he hinted the paperboy statue outside the Kabin contains a confession, and Norris’ letter finishes with the revelation Rita secretly used to have her hair coloured by Claudia Colby (Rula Lenska).

So what could Norris’ deep dark secret be, and why did he include it within his final letter to be read at his funeral?

Could he have a secret child which he was never able to tell anyone about when he was alive?

After his funeral, residents cannot help but turn their attention to Norris’ secret.

Mary, Gail, Ken Barlow (William Roache) and Brian Packham (Peter Gunn) gather around the paperboy to try to find out what is hidden inside, but they struggle to get the statue open.

Determined to find out what Norris has supposedly left inside, Mary gets hold of a chainsaw and makes a brash decision to decapitate the paperboy.

Could they discover that Norris’ secret child will need financial help now he has died?

Or could Norris have actually been involved in criminal activities during his lifetime which he was too ashamed of to tell anyone?

As well as the mystery around Norris’ final letter being raised at his funeral a furious Audrey rounds on Rita for her betrayal, irritated she would visit her long-time hairdressing rival.

Soon the mood at Norris’s wake is ruined by Audrey and Rita’s spat.

Will they be able to put their differences aside in respect of Norris and his loved ones?

Actor Malcolm announced he was bidding farewell to character Norris earlier this year after 27 years on the ITV soap.

He first joined Coronation Street in 1994, but he only made a small number of appearances on the cobbles after recovering from a near-fatal heart attack in 2017.

Discussing his departure from the soap, Malcolm said: “I absolutely adored playing Norris and I was pleased to be able to return briefly after my operation.

“It took a great deal of courage to make the decision to retire, but I had come to realise that although the mind was willing the body was not so much,” he said in a statement to Digital Spy.

Coronation Street airs on Monday, Wednesday, and Friday on ITV.