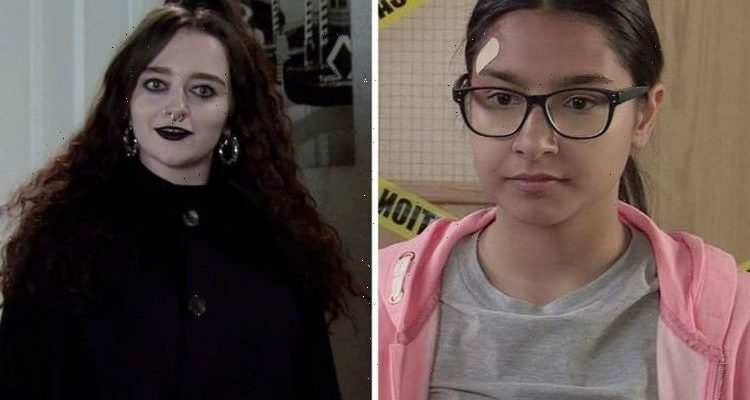 Coronation Street’s Asha (played by Tanisha Gorey) and Nina (Mollie Gallagher) will finally reunite on the cobbles next week following the dramatic sinkhole collapse. The former flames are set to join forces to prove for once and for all that Corey (Maximus Evans) is guilty of the murder of Seb Franklin (Harry Visinoni) – but will they succeed?

Fans of the ITV soap will be pleased to learn Nina and Asha will rekindle their romance in upcoming scenes.

And despite him saying he found it in the pub, Asha is certain that it’s Corey’s from the night of the attack on Seb and Nina.

After Asha chances after him and he gets away, she and Nina resolve to track him down as they are aware it could be their only chance to prove Corey guilty once and for all.

With little joy from the police, the duo takes a photo of Stu from the shop’s CCTV and show it to Billy Mayhew (Daniel Brocklebank) who confirms he often eats at the soup kitchen.

The girls hope they can track down Stu by volunteering to help at the soup kitchen.

However, they soon realise Stu has been listening to their every word.

With Stu being unwilling to talk to Asha and Nina, they manage to speak to his friend Carol.

She urges the pair to speak to some of the town’s homeless people who reside by the riverbank but becomes furious when she sees them going through Stu’s belongings.

As Asha and Nina head home they spot Stu and Nina decides to bite the bullet and tell him they desperately need his help.

Nina opens up to Stu about how Seb’s murder and tells him Corey’s backpack could prove he killed Seb.

However, Stu makes it clear he does not want to be part of their plans and he rushes away leaving the girls bitterly disappointed.

Despite being disheartened by Stu, the former lovers appear to have bonded from their quest to prove Corey’s guilt.

After Stu runs away, Nina takes Asha’s hand and lovingly tells her she’s ready to give their relationship another try.

Nina explains to her that she’s willing to take her back, leaving a lovestruck Asha thrilled.

The girls split up earlier this year as Nina started to feel as if things were moving too fast when Asha constantly wanted to spend time with her.

At the time, Nina told Asha she wasn’t ready for a sexual relationship and gently suggested they returned to being friends.

Things have been tense between Asha and Nina in recent months as the pair have struggled with the aftermath of Seb’s murder.

However, with Nina ready to give Asha a second chance, will they be able to take things at a slower pace and make their relationship last this time around?