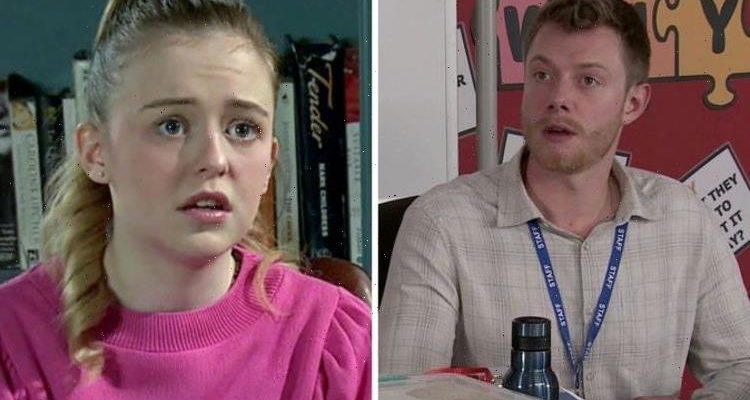 Summer Spellman (played by Harriet Bibby) was feeling the pressure of applying to university on Monday’s episode of Coronation Street. She sought the help of neighbour and teacher Daniel (Rob Mallard), who initially turned her down because he’d been unable to tutor Max Platt (Paddy Bever). However, he soon changed his mind and offered to help a desperate Summer, but his actions might set off a dangerous affair for the ITV soap pair, which could end up with Summer becoming pregnant.

In the instalment, Summer informed Daniel she was trying to apply to Oxford University, but was struggling with her personal statement.

“I’m impressed,” he told the teenager. A stressed out Summer later said: “I’m just going to sack the whole thing off, I’m obviously out of my depth.”

Daniel replied: “Rubbish, you just need to know how to work the system.”

“Exactly. I don’t,” the schoolgirl responded. Daniel told her to stop by his classroom to give her some pointers, leaving Summer delighted.

She was even more impressed when he told her he had got a place at Oxford for his masters course.

Later, Daniel encouraged Summer when she was feeling unsure of herself.

The teenager has been dating Aadi Alahan (Adam Hussain) for a while, but it seems they could be drifting apart.

Summer told Billy Mayhew (Daniel Brocklebank) earlier in the episode she didn’t have time to see Aadi because she was so busy with the application.

Could she be starting to fall for Daniel? When she offers to pay him for his help, he jokes she can take him on a tour of The Ashmolean, but Summer hasn’t heard of it.

As Daniel comments about “the youth of today”, Summer calls him a “grandad”.

“For that, you can definitely stay after school,” Daniel replied.

Summer seemed to have a thought, asking: “Actually, I don’t suppose I can stay after school?

“It’s just I’ve got the entrance exam at Christmas and I am completely bricking it.”

At first, Daniel says he wouldn’t be able to give Summer any extra help, but changes his mind when he sees her becoming stressed out while talking to Billy.

“I saw you and Billy earlier, I thought you looked a bit stressed,” he told her.

Summer replied: “Yeah, I need to apologise to him really, I just want this application to be perfect.”

“Maybe I can spare a few hours to help,” Daniel offered.

He asked Summer to bring along Billy to his house, but Summer said Billy couldn’t make it.

“I don’t have any money to pay for tutoring,” Summer admitted, but Daniel said he could use a reliable babysitter, which Summer happily agreed.

Could Summer and Daniel begin a secret affair when they start spending time together one-on-one?

Daniel isn’t the type to be irresponsible, but he might see something in Summer, who is as passionate about academics as he is.

Because Summer is an A-Level student, Daniel might find it harder not to blur the lines between student and neighbour.

If the two embark on an affair, things are bound to get chaotic, and Summer could end up pregnant.

It’s likely she may have to pretend that Aadi is the father, which could spiral into a whole new web of lies.

Just recently, Billy and Aadi’s father Dev Alahan (Jimmi Harkishin) told the youngsters to be careful in their relationship during a drunken conversation.

But Billy would never expect Summer to get caught up in an affair, especially not with a teacher.

Daniel has only just started working as a teacher at the school, but could his career already be at risk?

Summer becoming pregnant would also be a reason to keep the character on the cobbles, so it’s possible she decides not to go to university after all.

Coronation Street continues on Wednesday at 7.30pm on ITV.