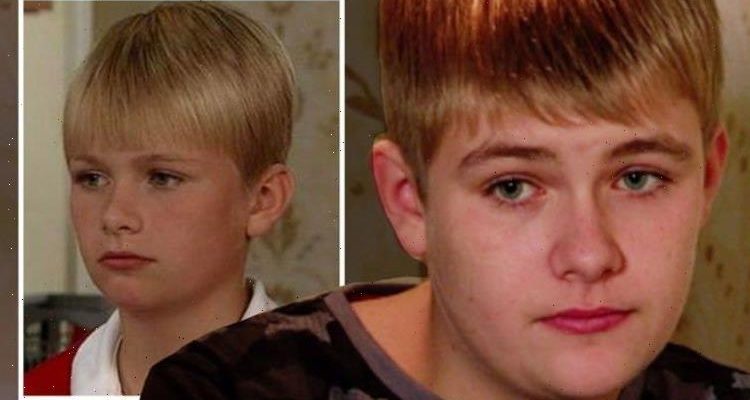 Max was first introduced to Coronation Street in 2010 and for the past 11 years, he has been played by young actor, Harry McDermott. The teenager has been at the centre of some hard-hitting storylines, including the death of his mother, Kylie Platt (played by Paula Lane) and his father, Callum Logan (Sean Ward), as well as being diagnosed with ADHD and selling his medication at school. However, as the young Weatherfield resident gets thrust into another storyline in upcoming scenes on the ITV soap, he will be played by a new actor. Here is everything you need to know about the recasting.

Why did the original Max Turner leave Coronation Street?

Harry shot to fame in the role of Max at just four years old and has starred alongside the actor who plays David Platt, Jack P Shepherd, for most of his time on the show

The actor managed to maintain his role on-screen alongside school work and he has been supported by family and friends throughout his career.

However, the soap star has now left the show as the soap wants to take the character in a new direction this year.

A spokesperson for the show said: “We have all watched Harry grow up alongside Max Turner for the past 11 years and we want to thank him for everything he has brought to the character.

“It is always a difficult decision to recast a role and we look forward to following Harry’s career as he continues with his acting studies and explores other opportunities.

“We wish him every success for the future,” they continued and a new actor will be taking on the iconic role, they told Metro.co.uk.

Who will replace the original Max Turner on Coronation Street?

Newcomer Paddy Bever will be taking on the role of Max and he will feature in his scenes on the show later this week.

The young actor has already filmed his first scenes on the show and his new storyline will involve teacher Daniel Osbourne (Rob Mallard).

As the father of one begins his teaching placement at the local high school, his father, Ken Barlow (William Roache) couldn’t be prouder.

However, he clashes with Max when the youngster begins playing up in class in what will be the first scenes viewers have ever seen the character in an educational environment.

David tries to pull up his son for his behaviour but his words don’t get through and Max storms off.

We wish [Harry] every success for the future

David’s worries don’t stop there as he becomes concerned for his son when Max says school is a waste of his time.

When the youngster does return to school, however, he forgets to do his homework and Daniel issues him with detention.

The youngster shows little remorse and when David asks Daniel to help him with extra tutoring, he makes excuses not to help.

It seems Max’s character is going to head in a much darker route in upcoming scenes as his rebellious nature reaches a head.

Paddy will be channelling a new era for the Platt family as he goes from a young boy into a man but it is yet to be seen if David can control his behaviour.

It’s been reported the new storyline will be “explosive” and it has been indicated the Platt household will be involved in a huge stunt later this year.

With the sinkhole still lingering in their back garden, a tragedy will occur which will see one character killed.

Executive producer Iain MacLeod teased the events of disaster, explaining: “We’ve tried to look at the last 12 months and the limited way in which all soaps have been forced to tell their stories, and try to subvert that and go ‘we’re back’.

“It’s a statement of intent that we wanted, as a show, to put out there – to make something we couldn’t possibly have made in the past 18 months because the pandemic wouldn’t allow it.”

“When you do a story of a certain scale and at a certain level of spectacle, the viewers expect there to be significant aftermath to it and significant outcomes,” he continued.

“So yes, I can confirm that Chekhov’s sinkhole will result in a death,” he added to The Mirror but it’s not been confirmed who will die.

It could be the new Max has a part to play in the disaster or he could even be the unlucky victim of the tragedy.

Taking to Twitter, viewers have commented on Max’s recasting, with one writing: “Been wanting to say for a while that Max should be given more material due to the potential this character has.

“Been watching a bit of Emmerdale and correct me if I’m wrong, but I think there’s a potential dynamic between Max and David that is similar to Liv [Flaherty] (Isobel Steele) and Aaron [Dingle] (Danny Miller) #corrie.”

Coronation Street airs Mondays, Wednesdays and Fridays at 7:30pm and 8:30pm on ITV. An extra, hour-long episode will air on Thursday this week at 8pm.