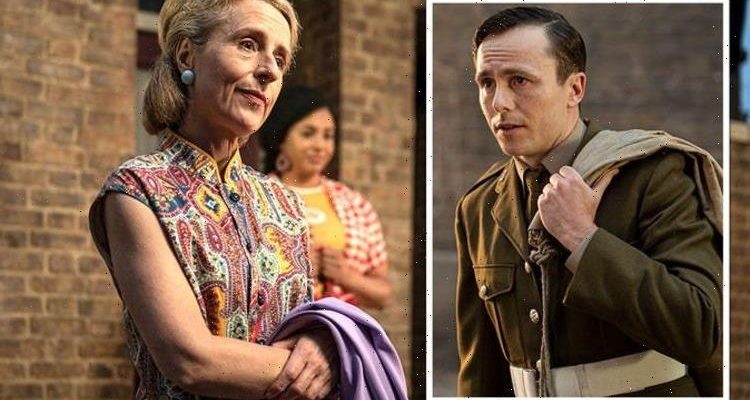 Call The Midwife is back on BBC One and the staff at Nonnatus House face further pressures. In tonight’s episode, Shelagh Turner (played by Laura Main) organises a special celebration to mark 100 years since the Order first arrived in Poplar. Express.co.uk has all you need to know about who will be joining the cast.

Who is in Call The Midwife season 11 episode 3?

Not much is known about Thelma at this stage but she features in a few promotional images.

The character is seen with a bucket and cleaning brush, and she appears to be a maternal figure.

Thelma is played by Nicola Stephenson, a 50-year-old English actress known for Brookside and Holby City.

Julie Haig appears to be getting married in the episode as she is pictured in a white ceremonial gown.

She seems to be related to Thelma in some way and could be her daughter.

Julie is played by Chicago Johnson, who has previously starred in Awakened Dreams and Queens of Mystery.

Mo appears to be a cool and collected character who is associated with the Haig family.

In promotional photos, he is seen smoking in his car, wearing sunglasses.

He is played by Daniel Ben Zenou, best known for his roles in Skins and Jesus: His Life.

His other credits include Guilt and Strike Back.

Bernard is played by Phil Cornwell, a 64-year-old English actor and comedian.

He is known for being part of the Dead Ringers television and radio series and was the voice of Murdoc Niccals in Gorillaz.

Albert Huntley is played by Philip Harvey, a 74-year-old actor who has starred in a number of TV shorts.

His other credits include Peep Show and Drifters.

Joan Avis is played by Jane Booker, a 65-year-old actress who has stared in more than 40 TV roles.

She has featured in Doctors, Midsomer Murders, Casualty and My Family to name just a few shows.

The Parliamentary secretary is played by Dominic Cazenove, a 47-year-old actor who has appeared on both stage and screen.

His previous roles include The Importance of Being Earnest and Funny Peculiar.

The star studied Zoology at university.

Jeff appears to be a soldier in the series, but not much is known about where he is serving.

He is pictured alongside Mrs Lilly (Sarah Hynds) and appears to be attending a wedding.

The soldier is played by Joe McNamara, who has had roles in Don Carlos, Othello, She Stoops to Conquer and Uncle Vanya.

In the upcoming episode, Sister Hilda (Fenella Woolgar) feels as though she should have been in charge of organising the anniversary festivities.

Nurse Crane (Linda Bassett) takes care of a young singer who is trying to figure out the correct path for her future.

All of the main cast will be making a comeback in the fan-favourite historical drama.

Call The Midwife airs at 8pm on BBC One.