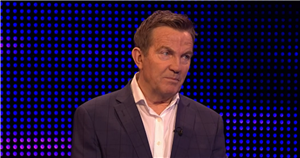 India, an active user on Twitter, posted the adorable snap to her 42.3K followers on Wednesday evening at the same time ITV's hit game show, The Chase which Bradley hosts, was on television.

The Celebrity Big Brother star got fans guessing by captioning the pic: "Photo from my good friend @JC – who's this?"

Fans of Bradley's were quick to spot him despite the snap being taken years earlier.

In the picture, Bradley sports red and white stripes as he's wearing his old Brentford football team uniform, with his brunette hair falling into his face.

Before Bradley's days as a presenter, he had a successful career as a professional footballer.

However, after a series of ankle fractures, Bradley's football career ended when he was only 22.

The father-of-two has since participated in Soccer Aid both as a player and a coach.

Fans loved the pic and tweeted their appreciation.

One fan wrote, "Looks like Bradley Walsh India if I not mistaken? P.S. was & is still a good looking man."

Bradley still remains focused on his career as an actor and presenter rather than donning his Brentford shirt again.

Most recently, Bradley is due to star in The Darling Buds of May reboot, entitled The Larkins.

Joanna Scanlan, star of The Thick of It and No Offence, is set to play Ma Larkin opposite Bradley’s Pop Larkin.

Bradley's son Barney is also due to make an appearance on the show.

The two proved to be television favourites after their TV show Bradley Walsh & Son: Breaking Dad proved to be a huge success.

Barney, 23, is set to play policeman PC Harness on the reboot.

Other familiar faces set to appear include Doctor Who star Peter Davison, Downton Abbey's Robert Bathurst and Lydia Page, who is best known for starring in the CBBC series The Worst Witch.

The Chase airs weekdays at 5pm on ITV. Catch up available on the ITV hub.