By now the news has leaked that Bryan Cranston and Aaron Paul’s characters Walt and Jesse will appear in the final season of Better Call Saul. Fans were hoping and praying to see the duo for quite some time but it didn’t become official until recently. Giancarlo Esposito and the rest of the Better Call Saul cast and crew kept the secret under lock and key, only for the appearances to be announced before the season 6 premiere.

Of course, Breaking Bad fans have long suspected that Walt and Jesse would show up at some point in Better Call Saul. Rumors circulated, but there was nothing concrete to suggest their return for a while. That all changed when co-creator and showrunner Peter Gould broke the news at PaleyFest in early April.

“I have to say that we’ve been a little squirrelly about this,” Gould said, according to The Hollywood Reporter. “I’m naturally a little bit cagey about things, and I don’t want to spoil things for the audience. The first question we got when we started the show was, ‘Are we going to see Walt and Jesse?’ And instead of evading, I’ll just say ‘yeah.’”

While appearing on Jimmy Kimmel Live!, Esposito was asked if he would be appearing in scenes with Bryan Cranston and Aaron Paul. “I got a bone to pick,” Esposito said cheerfully. The actor called Cranston and Paul’s return for the final season of Better Call Saul the “biggest secret ever kept by a cast and crew.”

“Inklings that Bryan is in town. Why would Bryan be in town? No one has seen him. Oh! Aaron’s in town too. Oh! Go figure. Is he really? — No one knew anything. Flew them in on a private plane. No one saw them or knew anything. Everyone kept it a secret. We all keep it a secret and then here we are two weeks before we release the season and they announced it,” joked Esposito. “Why did we keep it a secret?” 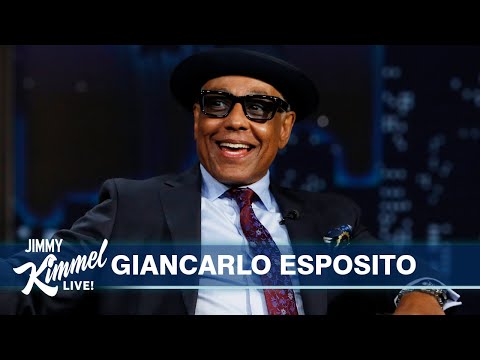 Giancarlo Esposito isn’t the only one who was surprised by the Walt and Jesse announcement for Better Call Saul. Aaron Paul himself was also taken by surprise. Paul told The Hollywood Reporter he was “shocked” when he heard the news.

“I was heading to the [final season] premiere party of Better Call Saul, and they go, ‘There’s a flag on the play. Just so you know, Vince and Peter let everyone know that you and Bryan are going to be in the final season.’ And I was like, ‘What?!’ So I didn’t see that coming.”

Paul continued, “To be honest, I’m happy to be able to finally talk about it and not be squirrelly. It’s nice to be able to be open about it. So I’m excited. I think fans of Breaking Bad and Better Call Saul might have been expecting it.