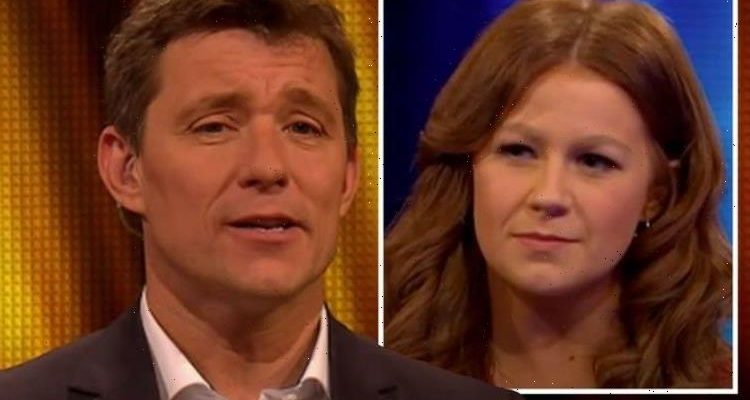 Ben, 46, was on hand to help four quizzing amateurs battle their way through Tipping Point in hopes to walk away with a grand jackpot prize. One of the players who wanted to get their hands on the cash was Bethany, who was eager to answer as many questions as possible. However, during the second round of the ITV show, she was put in her place by the host as he questioned why she had interrupted him instead of waiting to hear the full question.

The moment came as Ben was about to ask Bethany the last question in her quick-fire round, where she hoped to accumulate as many counters as she could.

Ben asked the contestant: “The Biscione is a serpent symbol associated with which Italian Ceria football club?”

Bethany interrupted too early as she gave the answer of the snake before the presenter could say the word “Italian”.

As the contestant had jumped in, the host gave the correct answer of “Inter Milan” before hitting back at the player.

Ben told the amateur quizzer: “You jumped in with ‘snake’ and it was actually a football question,” to which she replied: “Brilliant.”

As he was interrupted, Ben gave the question in full with Bethany shaking her head because she said she “wouldn’t have got” the answer to the football question.

Bethany acquired four counters, however, and proceeded to play them to increase her jackpot before the end of the second round.

Unfortunately, Bethany didn’t last too long in the game as with just over £400 in her bank, she was the player with the lowest amount of money.

Taking to Twitter, some viewers reacted to her exit as one shared: “Bethany didn’t have a lovely day #TippingPoint.”

“Is there anything more infuriating than watching people press the button at the wrong time? For f***s sake Bethany #tippingpoint,” a second posted.

This meant the frontrunners Zoe and Roy were the last two players remaining and battled it out to win the place in the final.

Although Zoe played a good game, she managed to miss the point every time and Ben told her luck just wasn’t on her side.

This gave Roy a huge advantage as he was able to come in after her and take the coins she would’ve won if they had dropped for her.

The final was nail-biting as the quizzing amateur answered questions from a variety of subject areas and hoped he could win three coins from each one.

Unfortunately, the giant arcade-style machine wasn’t working in his favour and Roy couldn’t get the star counter to budge.

By the end of the final round, he’d managed to accumulate £3,150 in his bank and he was asked by Ben whether he wanted to leave with the money he had worked for or play another three counters.

Not believing they would be enough to secure him the £10,000, the contestant decided to take home the winnings he’d already got.

In a simulation of what would’ve happened, another three counters wouldn’t have worked and he would’ve left with nothing.

Those watching at home took to Twitter to comment on the result of the episode, with one writing: “Good choice Roy #tippingpoint.”

Another posted: “Favourite bit on #TippingPoint is when they don’t take the gamble, and it drops. I’d just be happy with the spa day.”