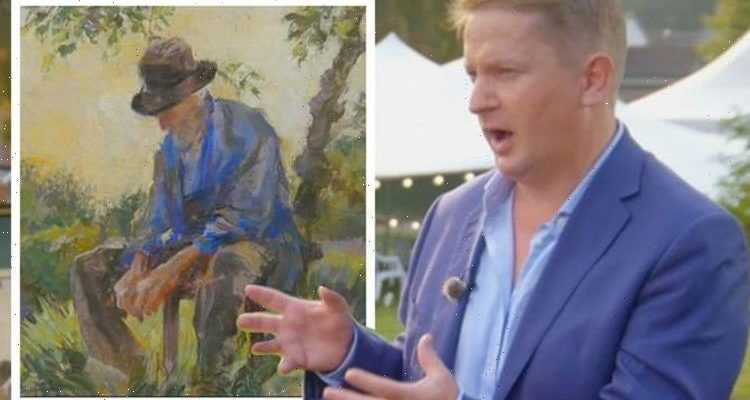 Grant was on hand to help a pair of guests who attended the filming of Antiques Roadshow at Christchurch Mansion for the episode in question. The expert got to work on understanding how the priceless pieces of pastel and watercolour came to be in the owner’s possession. However, it was the cost of how much the relics showcased on the BBC programme would sell for that blew both him and the guests he was speaking to away.

Beginning his analysis of the artwork, the expert said: “I was really hoping, almost praying to see great work by the local artist Anna Airy at Christchurch today.

“And, I’m a lucky man because you brought in two fabulous examples by her. You’ve brought in a very lovely pastel of a very pensive man and farmworkers, a work on paper, a watercolour.

“So what do you know about Anna Airy?” he asked the guests and he was impressed with the knowledge they had.

The owner of the pieces replied: “I’ve always admired Anna Airy from the time I was an art student and she lived about three or four miles north of Ipswich in a little pretty village called Playford.

“I’ve always been keen to see her work and was very fortunate to purchase this work a few years ago and I admired the one owned by my friend,” he added as he pointed at the pastel piece.

Talking a bit more about Anna, Grant explained:: “So she had a long life, didn’t she? She was born in 1882 and hugely respected as a female artist of the 20th century.

“She could paint in watercolours, pastels and oils. She was a great etcher, too, and loved botanical studies.”

Studying the two pieces of artwork independently, the expert focused on the watercolour of farmers in a field, to begin with.

“I adore these scenes, they’re very different,” Grant said before adding: “We’re talking about the 1930s with the watercolour.

“You could also most imagine this watercolour being painted in 1900 or even 1890 because it’s depicting a very similar scene.

“The figures look like they’ve worked so hard, you almost feel arthritis in their fingers,” before he moved onto the next one.

“And then this pastel of this elderly gentleman, do we know much about him?” the expert asked the guest.

“It’s reported to be Anna’s husband, Geoffrey Buckingham Pocock who was also an artist. Again I should think possibly the 1930s but I don’t know,” the guest explained.

Grant had a different take as he said: “So if we are assuming it’s her husband, he would have been in his 60s in the 1930s but it is quite possible this is a gentleman who’s a little bit older than that.

“I mean, he could be in his 70s. So I don’t think we can be definite that it’s of her husband,” he declared before beginning the valuation.

“I love the colour of that particular pastel. It’s very, very strong. She was hugely prolific and as you know, exhibited greatly, internationally in America, Canada but throughout Britain, too.”

“So she’s one of our greatest female artists of the 20th Century. We should be very proud of her,” Grant told the guest.

Putting all of his knowledge of Anne together and looking at the pieces of artwork in front of him, the expert came up with two figures.

“So we come to value and you’ve brought two really wonderful examples of Anne Airy’s work. I love the watercolour and I would put £1,500 to £2,500 on that.

“Well, that’s really encouraging,” the owner of the pieces said.

Antiques Roadshow is available to watch on BBC iPlayer.