MCKAYLA Maroney is a former US gymnast who was a member of the American women's gymnastics team dubbed the Fierce Five at the 2012 Summer Olympics.

The elite athlete says she was abused by USA Gymnastic national doctor Larry Nassar from when she was 13 until her retirement in 2016.

The 25-year-old gymnast has added her voice to the legions of women coming forward about sex abuse at work, in the wake of the Harvey Weinstein scandal.

Who is McKayla Maroney?

Maroney was born in December 1995 in Long Beach, California and from an early age showed an interest in gymnastics.

Her parents home-schooled her so she could focus on her sporting career and in 2012 she was picked to represent the United States at the London Olympics.

She was a member of the team dubbed the Fierce Five and together they scooped the gold medal for the women's team event at the 2012 Games.

Maroney was also on course to win an individual gold on the vault but a slip up on her landing meant she had to settle for silver.

After that her gymnastics career was dogged with injury and decided to retire from the sport at the age of 20.

Since leaving gymnastics behind, Maroney has been trying to launch a pop career and has released a single called Ghost.

What has she said about Larry Nassar?

The Olympic gold medallist posted a statement on Twitter saying convicted sex offender Nassar began molesting her when she was 13 and continued for seven years.

She wrote: "It seemed whenever and wherever this man could find the chance, I was 'treated'.

"It happened in London before my team and I won the gold medal, and it happened before I won my Silver."

Maroney described how Nassar allegedly gave her a sleeping pill on a flight to Tokyo for the 2011 world championships in Japan and woke up in his hotel room.

She said: "The next thing I know, I was all alone with him in his hotel room getting a 'treatment'.

"I thought I was going to die that night."

Testifying at a September 2021 Senate Judicial hearing into the FBI's botched handling of sexual abuse complaints against Nassar, Maroney said: "They allowed a child molester to go free for more than a year and this inaction directly allowed Nassar's abuse to continue.

"What is the point of reporting abuse if our own FBI agents are going to take it upon themselves to bury that report in a drawer?"

Allegations into Nassar were first brought to the agency in July 2015 but several violations of protocols led to months of delay which meant Nassar wasn't apprehended until 2016.

In 2014, supposed nude pictures of McKayla were posted online as part of the Fappening leak.

This was where several celebrities found their iCloud accounts had been hacked with intimate images then posted on the internet.

But later her lawyers said that the pictures were in fact of the former gymnast taken before she was 18 and demanded they be pulled from sites.

Later she also denied having lip fillers after sports fans noticed her changing appearance when she watched the gymnastics competition at the 2016 Olympics.

Speaking to Seventeen.com, she said about the rumours: “First of all I haven’t. And I’ve posted a picture on Instagram last night that was like, how do I make my face look like I didn’t do anything to my face when I literally have not done anything to my face?” 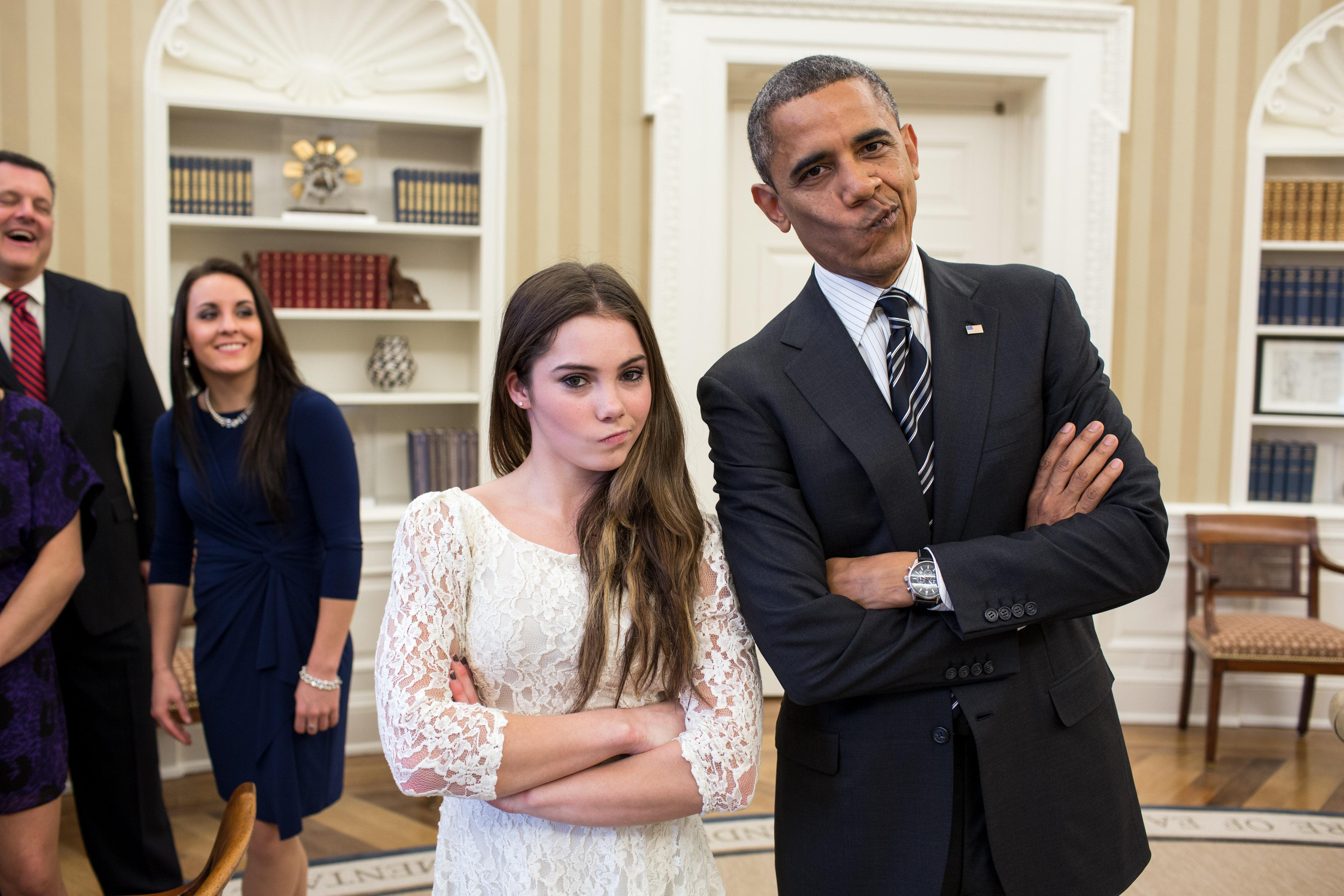 How did McKayla Maroney become an internet meme?

Maroney became an internet meme in 2012 during an Olympic medal ceremony at the London Games.

She was predicted to win individual gold on the vault but a stumble meant she had to settle for silver.

On receiving her second place medal, Maroney was pictured looking less than impressed with a sideways pout.

And thanks to the McKayla is not impressed Tumblr blog, the image went viral – and was Photoshopped into various memes.

But afterwards, Maroney took the mockery in her stride and when she met then President Barack Obama with the rest of the US Gymnastics squad at the White House in November 2012, the pair posed together and both did her signature pout.