Triller's 'Fight Club' offered not only professional boxing bouts but musical performances, including from Snoop Dogg. 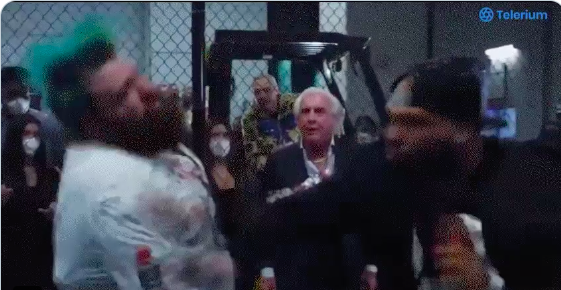 But quite possibly the most surprising segment on the pay-per-view was a slapping contest.

Flair officiated the competition, which ended in a brutal knockout with Saturday Night Live star Pete Davidson also in attendance.

Triller busted onto the scene in November as they brought heavyweight icon Mike Tyson, 54, out of retirement.

Flair was among the celebrity guests, and said the promotion took inspiration from WWE.

"The NBA, baseball, football, the entrances get grander, the All-Star games get bigger, the Super Bowl gets bigger, but it all started with WrestleMania."

Flair, 72, an icon in the WWE ring, admitted he was impressed by Triller's PPV production.

He said: "It's my first event, I'm not sure what to think of it.

"It's amazing. The star-power, the people that are hear, attending the event, that speaks volumes already.

"And, you know, you've got a national champion. The kid is tough – from WIsconsin.

"And I don't know how tough the Paul kid is. He better be tough, if he's wrestling a guy or fighting a guy who's a two-time national champion."