The Melbourne Vixens and the West Coast Fever played out one of the games of the 2020 Super Netball season on Saturday, drawing 63-63 after Jhaniele Fowler scored following the final buzzer.

The Vixens looked dead and buried in the third term, trailing by nearly 10 points and being completely outplayed by the upstart Fever side who proved they could mix it with the best side in the competition. 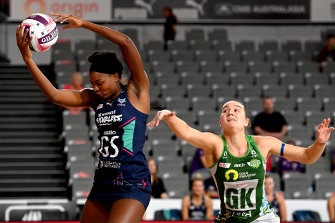 However, the top-of-the-table Vixens rallied late in the third term, nailing four super shots and missing many more, to cut the Fever's lead to six points to start the final term.

The Vixens took the lead with five minutes left through Mwai Kumwenda, but the lead changed numerous times after that. 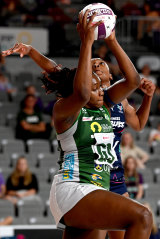 Caitlin Thwaites sunk a two-point super shot with 12 seconds on the clock to put the Vixens one point in front, but an after-the-buzzer one-pointer from the unstoppable Fowler secured the Fever a draw.

The Fever struggled to nail super shots during the whole contest while for the Vixens they were a big reason why they got the draw.

Three of their third-term super shots went to Kumwenda and one to Thwaites, a period of scoring that flipped the momentum.

The Vixens, avoiding the loss, secured their spot at the top of the ladder with finals looming. They had to try and quell Fowler's dominance without their starting goal keeper Emily Mannix (calf). Jo Weston did a good job at blunting her influence late but she was still able to bail out the Fever when called upon.

Thwaites said cleaning up turnovers late in the third term and through the final quarter was the key to the Vixens' resurgence.

"The fight back was encouraging," Thwaites said. "Jo [Weston] said it at the end. We need to not get into that place. Previously last year if teams got on top of us, that will be it.

"So the fact that we are able to turn it around and fight back, I thought with the pressure on them in the last 10 seconds, to have to get it in there. They put up a really good game today and they stopped a lot of what we were wanting to do."

Thwaites said the Fever were also excellent at pressuring the Vixens through the middle of the game, shutting down passing options.

"It was forcing us to go somewhere that was under pressure," Thwaites said. "Our timing and preparation to be free for the passes, it is something we will look at and try to get better."

Fowler said it was a difficult result to take. "It is a hard one to swallow, but the Vixens are really good team and we just had to take care of [our lead], which we didn't in the last two quarters," Fowler said.

The Vixens face the NSW Swifts on Tuesday evening in a top-of-the-table clash.