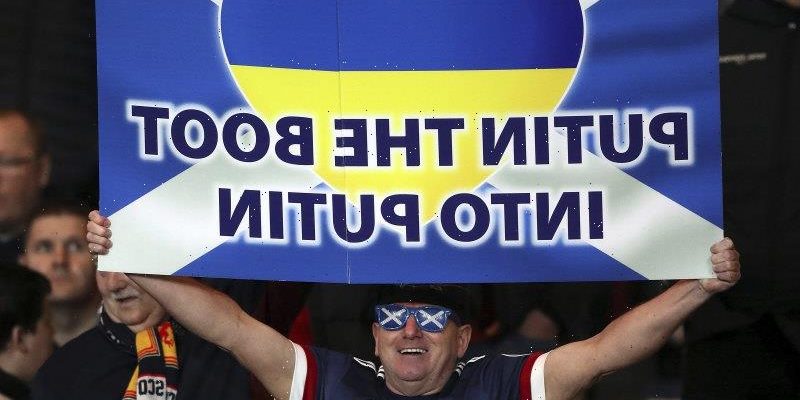 The best sports story of the week? No contest. It was what happened when Ukraine played Scotland on Wednesday night in Glasgow to stay in the hunt to go to the World Cup later this year in Qatar.

For Ukraine, as you know, has been cruelly invaded by the Russian war machine, but its people have refused to cede and gone on to inspire the world with their magnificent resistance. (Cue the old Ukrainian woman giving the armed Russian soldier some sunflower seeds to put in his pocket so that when he dies his corpse “can make Ukraine pretty”. Double-cue – corner pocket, in off black – the Ukrainian border guard on Snake Island who, on being told to give up by the Russian warship Moskva or face obliteration, replied: “Russian warship, go f— yourself!” Moskva has since been sunk and the border guard given a medal.)

Getting the national team together was no easy task. The national soccer comp in Ukraine has shut down and only a smattering of a scattering of Ukrainians are still playing in various leagues around Europe, while players from the most famous Ukrainian clubs, Shakhtar Donetsk and Dynamo Kyiv, are in exile and playing a few exhibition matches here and there around Europe to raise money for Ukrainian refugees. CouldUkrainian coach Oleksandr Petrakov really cobble together a side from such a mish-mash of players, all of them traumatised by news from home?

He did his best, and it was victory enough that last Wednesday in the deep twilight of the first day of summer that the side he put together headed out onto the Glasgow pitch to play against the flower of Scotland – when will we see their likes again? – each Ukrainian player draped in the national flag.

Few people were under any illusions, of course. The Scots were hardened professionals, at peak fitness, playing in regular elite competition, and playing at home before a delirious crowd. No one thought Ukraine had a chance – except the 11Ukrainians on the pitch.

Watch now as they play with an intensity borne of the fact that whatever bravery they might show, it is as nothing to what their brothers and sisters are facing at home taking on Russian tanks. And yet, they also know that Ukrainians at home are tuning in, willing them to win, to show the world that Ukraine goes on and . . .

And GOAAAAL! Ukrainian striker Andriy Yarmolenko puts it in the net in the 33rd minute, and they say the players could hear the cheers from Kyiv and even from the very front lines in the east where farmers had taken pause from blowing up Russian tanks to will their team onwards. And now Roman Yaremchuk soars above two Scottish defenders to head it past the goalkeeper to put Ukraine ahead 2-0!

They couldn’t, could they?

They could. Ukraine goes on to win 3-1 to stay in the hunt for World Cup qualification and, as the ref blows his whistle, the players embrace, sink to the ground, and weep. In Ukraine they cheer, weep, and get back to blowing up Russian tanks. 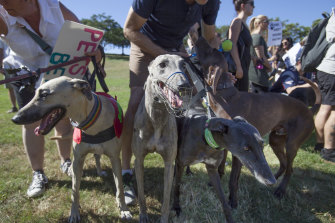 A visiting program for rescue greyhounds to aged-care facilities has been established. Credit:Fiona Morris

Every dog has its day

You might remember that line from The Big Chill when the news breaks that the partner of the deceased Alex has taken up with his best friend, and the two of them will be staying on in the old farmhouse down the road: “Well, that has a certain symmetry.”

And so does this. As Premier, Mike Baird did everything he could to shut down the wretched greyhound industry, only for the political blowback to be so strong he had to pull back, and his successors had such craven cave-ins that they’re now handing over taxpayer money to prop the damn thing up.

But Baird has not forgotten and, as CEO of the aged care provider HammondCare, has just partnered with Greyhound Rescue to bring a spark of joy and companionship to people in residential aged-care homes. The pilot program will result in regular visits from Greyhound Rescue teams with hounds to homes, particularly those who have clients living with dementia.

“Meaningful involvement with everyday life is crucial to everyone’s wellbeing,” Baird says. “What a wonderful outcome if rescued greyhounds can be given a new purpose providing happiness for the those who are older in the community.”

As if you didn’t know, Stand Tall is an organisation chaired by Nick Farr-Jones devoted to building hope and positivity in young people. The driving force is Nick’s wife Angie and co-founder Jeanine Treharne. This event has sold out with 6000 students attending, but it will be available for replay online for the next three months. Try www.standtallevent.com/online.

The low point for Rabbs?

For my interview series in the Sun-Herald, TFF chatted to the great Ray Warren on Friday about his life and times even as he announced his retirement, and – if we can bring it back to me, for a moment – managed to confirm what I have long boasted. 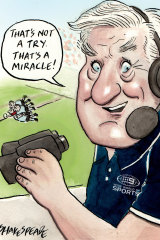 The high point of my own broadcasting career – co-commentating a Sevens match with Ray one night in the early 90s at the old Showground – was indeed his own low point.

Justin Langer to Kim Beazley: “The day after I resigned I had to come back to Perth and I had to have two weeks’ quarantine. And I was living in this back room. I woke up the next morning and there’s a quote up on the wall which I’d written years ago, and it says ‘what the caterpillar sees as the end of the world, the master sees as the butterfly’, and that was like this trigger.” Bloody hell. Earnest, much?

Jai Hindley on becoming the first Australian to win the Giro d’Italia: “It’s a beautiful feeling. A lot of emotions out there. I had in the back of my mind what happened in 2020 and I wasn’t going to let that happen again, to be honest. To take the win is really incredible. I’m really proud to be Australian and happy to take this one home.”

Russell Crowe on Twitter, replying to TFF’s own tweet lauding Ray Warren, who has announced his retirement from rugby league commentary: “The absolute best in the game. His dulcet tones will be sorely missed. Ray Warren brought a drama and a sense of occasion to every game he called.”

Swans counsel Duncan Miller on Trent Cotchin, who Franklin struck: “I’m tempted to say he might be invited to the Logies and not the Brownlow this year.”

Bernard Tomic challenging Nick Kyrgios: “I beat you once before, I’ll beat you again whenever you want. I dominate you every time we play, train, and we know that. You say you’re good at basketball, I’ll beat you at that too. Tennis? I’ll dominate you one-on-one. To not make excuses, I’ll even play you on grass, whenever you want. You know what? Let’s sort this out in the boxing ring. Put your gloves on, I’ll dominate you there also. Let’s see who’s better once and for all.”

Kyrgios not taking the bait: “I’m still playing on the tour, my brother. I’ve got bigger fish to fry. I’m actually in a grasscourt training block right now preparing for tournaments. Wimbledon and then US Open. I understand you’re at that future and Challenger level right now . . .” Ouch.

Novok Djokovic on hearing for the first time that the 20 refugees he’d shared the detention centre with in January had been released last month: “I’m obviously very happy about it, because I know that it was very difficult for them, particularly for the ones that stayed there for nine years. You know, I stayed there for a week, and I can’t imagine how they felt for nine years. They haven’t done anything wrong, and they are asylum seekers and stayed for nine years.” Already, I like him just a tiny bit better.

John Aloisi after leading Western United to the A-League Championship on if he’d extend his contract: “Show me the money.”

Wests Tigers coach Michael Maguire on if he thinks they can play finals this year: “Yep I do. We win every game and we will roll up every week with the attitude to win every game, so definitely.”

Lester Piggott, who died in England on Sunday, once said: “A good jockey doesn’t need orders and a bad jockey couldn’t carry them out anyway; so it’s best not to give them any.”

Team of the Week

Ray Warren Hangs up the microphone, if not yet the phone, after 55 years of broadcasting! Universally loved within the media fraternity, he will be missed.

Ukraine Beat Scotland at soccer and face Wales tomorrow for a spot in the World Cup. Carrrrrn Ukraine!

Waratahs In the Super Rugby quarter-finals against the Chiefs.

Western United Won the A-League grand final. I know. But now is not the time to say it. Stay shtoom.

Melbourne Recorded their first loss in the AFL since round 19 last year.

State of Origin Starts on Wednesday.

RIP Lester Piggott Famed British jockey who won many races including nine English Derby victories died at the age of 86.