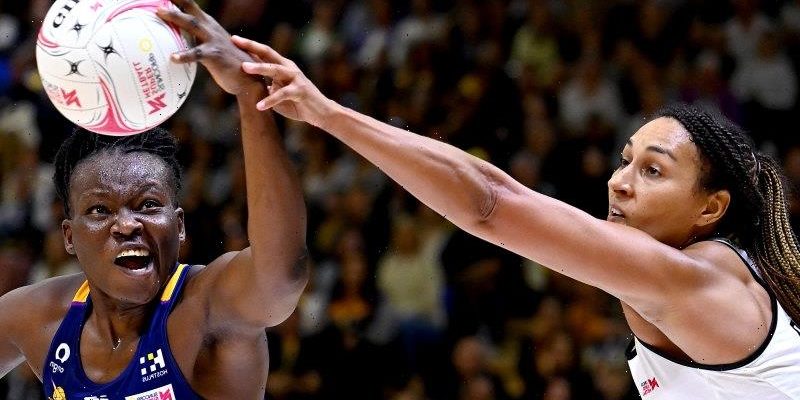 Collingwood relinquished their lead to a determined Sunshine Coast Lightning in extra-time at USC Stadium on Saturday to fall to a narrow 67-65 loss.

Super shots were utilised to tie the scores with three minutes left. It was an arm-wrestle which saw the sides 62 apiece on the siren, heading to extra-time.

By the end, with the scores tight, it was a race against the clock, with Lightning emerging with a thrilling victory that had the crowd on their feet. 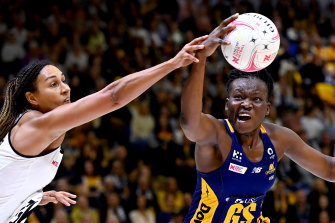 Peace Proscovia of the Lightning and Geva Mentor of Collingwood challenge for thre ball.Credit:Getty Images

After a bye week for both teams, the Magpies had sought to keep their winning streak alive following a dominant 67-51 victory over rivals the Melbourne Vixens. But victory to the Lightning secured the Queensland side third position on the Super Netball ladder, on the same number of points as the ladder-leading Giants and NSW Swifts.

Renowned as one of the most consistent sides in the league, the Lightning continue their endeavour to become the only team to make five consecutive finals campaigns in Super Netball.

Having spent the past four weeks on the road, after relocating to Sydney and then to the Sunshine Coast, due to COVID-19 complications, the Magpies were able to play their match unlike the Vixens, whose game against West Coast Fever was postponed when a number of Vixens players were refused entry to Western Australia.

Fever on Saturday apologised for their reaction in which they laid the blame on the Vixens. “We appreciate the complexity of the situation and are committed to working with all parties to reschedule the fixture at a time which ensures the safety and well-being of all athletes and staff,” a statement said.

“West Coast Fever also apologises that our public response to the cancellation of the match yesterday caused offence to some netball fans. This was certainly not our intention.“

It was a high intensity first term on the Sunshine Coast. Collingwood held strong defensive pressure and converted almost faultlessly thanks to Shimona Nelson’s 100 per cent shooting accuracy in her 50th national league game. Gabrielle Sinclair and centre Molly Jovic each had six and seven goal assists, respectively. The dynamic trio saw the Magpies lead by five at the first break.

Lightning had been clear in their attempts to smother Magpie Kelsey Browne, finding their groove through Collingwood’s defensive line and scoring five in a row to lead just before the power five.

The Magpies’ centre-pass conversion dropped significantly as they struggled to keep up with the increased pace from their opponents but managed to catch their breath and wrestled back their lead before the main break.

Collingwood head coach Nicole Richardson said: “Our first quarter was probably the best quarter in our season, we lost our way in terms of our structures across our attacking transverse line in the second, we gave them a little too much in the defensive side of things.”

Despite this, Collingwood held their lead, and both teams shifted defensive structures to produce a highly physical third term. Once again, the Lightning fought back to level the scores but the Magpies broke away to head into the final quarter.

A challenge from Richardson to Ward to “work harder”, having been highly penalised across the game, saw the Magpies fire up. With Koenen as the ringleader, Lightning looked threatening too, just one goal behind as the power five kicked in.