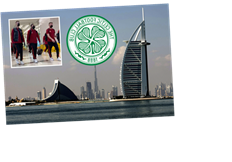 SPARTAK MOSCOW have trolled Celtic over their controversial Dubai trip… after arriving in the desert state.

Hoops chief executive Peter Lawwell was forced to issue an apology over the ill-fated getaway, which provoked fierce criticism from First Minister Nicola Sturgeon and the club's own supporters.

Lawwell spoke in front of club TV cameras as he admitted the winter jaunt was 'a mistake' during a worsening global pandemic.

That left the Hoops decimated for the rearranged clash with Hibs as they were held to a 1-1 draw on Monday.

As a result, Celtic slipped 21 points behind champions-elect Rangers – killing their ten-in-a-row dreams once and for all.

Now, Russian side Spartak have travelled to the Middle East for a warm-weather training camp and couldn't resist a cheeky dig at the Scottish champions.

Sharing a video of their squad walking through the airport, they tweeted: "We're in Dubai. Any tips, @CelticFC?".

The post caught the attention of supporters as they replied in their numbers, with one Celtic fan hitting back: "Zenit St Petersburg > Spartak…."

After Scott Brown and Neil Lennon were pictured poolside drinking beer, one Rangers punter joked: "Straight to the pool for some well earned pints."

While another Gers fan bragged: "Celtic are the laughing stock of the football world now fs, what have they become".

The cheeky posts comes after Celtic fans were left baffled when Armstrong Oko-Flex was pictured wearing AIRPODS moments before his debut.

Gavin Strachan – who was in charge of the first-team for the clash with the Hibees – confirmed post-match that boss Lennon was communicating with the youngster through the headphones.